IMPERIAL COUNTY — The following reports were collected from the Imperial County Sheriff’s Office call logs from Jan. 5 through Jan. 9.

9:54 a.m.: A subject called deputies from the Superstition Mountain area to report that his brother-in-law had allegedly threatened him and other family members with a rattlesnake, trying to make the snake bite them.

9:17 p.m.: A female subject called 911 from the Slab City Skatepark and advised dispatchers that she had been drugged and kidnapped before disconnecting the line.

7:04 a.m.: A subject at the Slab City hot springs called 911 and advised that several people were attempting to kill him before disconnecting the line.

3:38 p.m.: Deputies responded to reports of a vehicle fire with injuries near the intersection of Highway 86 and Sunrise Road in Salton City.

11:59 a.m.: A subject called deputies from the Niland area to report that he found a dinosaur head in a canal. When asked if it might be a lizard, the man said “possibly” and then disconnected the line.

12:38 a.m.: Deputies responded to a vehicle rollover with injuries at the Glamis Sand Drags.

10:50 a.m.: Deputies received a report that a vehicle had driven through the Memory Gardens Cemetery near Imperial, damaging headstones and mementos left at gravesites and the unknown suspects had also stolen the American flag from the flagpole.

2:40 p.m.: A male subject in the Bombay Beach area called deputies to report that a skinny female subject with short salt and pepper hair had come up to him at the corner of E Street and Third Street swinging a machete.

12:54 p.m.: Deputies responded to Sonrisa Villa in the 700 block of East Fifth Street for reports of a resident being aggressive toward the staff and trying to leave the facility.

3:43 p.m.: A resident of Sonrisa Villa requested a deputy. She advised that she didn’t have an emergency but “they are not allowing her to drink her wine.”

9:08 a.m.: A female subject called deputies from Ace Hardware on Fifth Street and said that an employee at the store had almost hit her with his vehicle while arriving at work and was now following her around the store and harassing her. 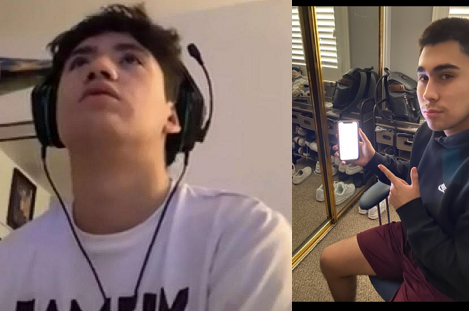 An Unconventional Ceremony for the Graduating Class of 2020