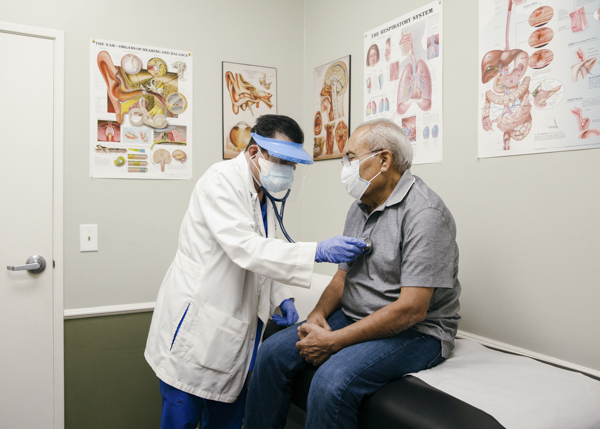 That’s the question facing state lawmakers after a group of Democratic legislators on Thursday unveiled a package of bills to create a universal health care program called CalCare. The proposal has already earned better reception than it did last year, when it was tabled without a hearing after lawmakers raised concerns about its lack of a funding source.

Democratic Assemblymember Jim Wood of Santa Rosa said Thursday that he will vote to move the bill forward next week when it’s scheduled to be considered by the Assembly Health Committee, which he leads.

But the funding source — taxes — proposed in a separate bill will likely face an uphill battle. Tax hikes must be approved by two-thirds of lawmakers in both the state Assembly and Senate — a tall order, especially in an election year — and a majority of voters to go into effect. And the doctors’ lobby, insurance industry and business groups are already mobilizing against the bill.

Here’s a closer look at how state lawmakers are proposing to pay for universal health care, which state analysts in 2017 estimated could cost about $400 billion annually:

The bills present a conundrum for Gov. Gavin Newsom, who vowed to implement single-payer health care when campaigning for the governorship in 2018. That earned him the backing of powerful groups like the California Nurses Association and progressive activists — and now they want him to make good on his promise, especially after they mobilized to help him defeat the recall last September. An estimated 3.2 million Californians remain uninsured.

California has administered 65,613,968 vaccine doses, and 71.4% of eligible Californians are fully vaccinated.

That sound you hear is thousands of Californians entering quarantine or isolation as omicron sweeps through the state. Nearly three dozen state lawmakers were absent from Thursday floor sessions after many of them, including Assembly Speaker Anthony Rendon, were potentially exposed to COVID-19 at a farewell event for a colleague on Tuesday night, CalMatters’ Alexei Koseff reports — marking an inauspicious start to a legislative session that began less than a week ago. Other employers are beefing up protections:Los Angeles County is requiring businesses to provide, no later than Jan. 17, well-fitting medical-grade masks, surgical masks or respirators to employees who work indoors in close contact with others.

Quarantine figures are similarly startling in other workplaces. About 40% of hospitals are facing critical staff shortages, with some reporting that as much as 25% of their staff is absent due to virus-related reasons, a California Hospital Association representative told the Associated Press. Nearly 900 San Francisco teachers and aides — a whopping 20% of the district’s educator workforce — were absent Thursday, and Oakland Unified educators plan to hold a “sickout” today. Staff shortages have prompted temporary school closures in the East Bay, San Gabriel Valley, Redondo Beach, La Mesa and Carmel Valley, among other areas.Almost 200 San Diego Police Department employees are in isolation or quarantine. Around 450 Los Angeles County firefighters are quarantined, forcing the department to take the unprecedented step of transporting patients to the hospital in fire trucks rather than ambulances. And virus outbreaks are spreading through homeless shelters across the state, increasing demand for hotel rooms for self-isolation.

Worker shortages are only exacerbating California’s difficulty in meeting testing demand. Newsom is expected to announce as soon as today plans to send the California National Guard to state-funded testing sites to help ease long waits, CalMatters contributor Barbara Feder Ostrov reports. But the problem is also one of supply: COVID-19 tests are nearly impossible to find in the Bay Area, the San Francisco Chronicle reports, and the race to secure coveted appointments resulted in a four-hour traffic jam on Auto Mall Parkway in Fremont on Thursday. With appointments booked weeks in advance, and rapid test kits flying off the shelves as soon as they’re restocked, local governments such as Santa Clara County are trying to set up their own supply chains by negotiating with vendors. But increasing the supply of workers has proved even more challenging.

Demand for booster shots, meanwhile, isn’t nearly as high. Only 38% of vaccinated Californians have gotten a booster shot, according to an analysis from CalMatters’ Kristen Hwang and Ana Ibarra, and a third or less of residents are boosted in 20 of 58 counties. Only three counties — San Francisco, Marin and San Mateo — have seen more than half of their vaccinated residents get boosted.

A $1 billion proposal to build a luxury resort, fire station and 1,400 housing units in one of California’s poorest — and most fire-prone — regions was put on hold Thursday, when a superior court judge ruled that Lake County and the project developer failed to adequately account for potential hazards that could result from a wildfire forcing thousands of people to evacuate at the same time. The ruling is a win for Attorney General Rob Bonta and environmental groups, who recently secured a similar halt on a proposed development in a wildfire-prone area of San Diego. Taken together, the two rulings send a clear message: Local governments should not attempt to ease California’s housing crisis by building in areas of high fire risk — a term that applies to increasingly large swaths of the state.

On the opposite side of the weather spectrum, PG&E estimates that it will finish restoring power by next Tuesday or sooner to approximately 14,000 customers in the Sierra Nevada foothills, some of whom have been without power for 11 days after fierce winter snowstorms swept the region.

Wrong move to restrict water rights: California should reward, not punish, local agencies that plan for responsible water use and make critical infrastructure upgrades, writes Sean White, director of water and sewer for the city of Ukiah.

Regulate Big Ag’s water use: Portraying our agricultural economy as driven by subsistence needs rather than the desire to maximize profit is a gross mischaracterization of a multibillion-dollar industry, argues Elizabeth Reid-Wainscoat of the Center for Biological Diversity.

Kelly Ernby stood against vaccine mandates. Her death from COVID made her a symbol. // Los Angeles Times

Thinking of Buying a House? Here’s One Millennial’s Experience?

Prevention efforts lead to 2021 drop in homicides in Stockton. // ABC 10

Larry Elder isn’t running for governor, but he may run for president. // FOX 11 Los Angeles

Experts push California utilities to monitor the riskiest equipment on the grid. // Marketplace

Previous
‘Hellfire’ at Hospitals; Surge Through End of February