The Dogwood Road bridge where it crosses the Central Main Canal is shown. The Imperial County Board of Supervisors approved a steel structure to repair the sinking bridge on Tuesday, Jan. 4. | GOOGLE IMAGE
Home
Regional News
In Regional News

EL CENTRO — A previous proposal by the county to install a precast concrete bridge on Dogwood Road over the Central Main Canal has been scrapped in favor of a prefabricated steel truss bridge.

The planned steel truss bridge is expected to expedite the project’s overall design and construction by eliminating the need to construct the previously planned concrete bridge’s pylons that would disturb the canal’s streambed and require further environmental permitting.

The proposed steel truss bridge will be notable in another respect, as well, county Public Works Director John Gay told the Board of Supervisors during its Tuesday, Jan. 4 meeting.

“It will be the first one in our county,” Gay said.

Plans to replace the existing Dogwood Road concrete bridge date to 2016, when the Board of Supervisors originally approved an approximate $472,000 agreement with engineering and consulting firm NV5 Inc. to perform design and engineering services for the bridge project.

During the board’s meeting on Tuesday, it voted unanimously to amend its agreement with NV5 Inc. to spend an additional $148,350 for the design engineering services related to the newly proposed steel truss bridge.

The soil surrounding the existing Dogwood Road concrete bridge over the Central Main Canal is sinking at an annual average rate of about one inch. The original two feet of free space that the bridge had maintained above the canal’s water level is reduced to nothing during high flows, according to the resolution’s backup documents.

“In fact, currently the water in the canal is being obstructed by the bridge deck,” the backup documents stated.

Indeed, Supervisor Ray Castillo remarked during the meeting that whenever he travels on Dogwood Road to and from Calexico, he can’t help but notice the canal water’s encroachment and the importance of addressing the issue.

“Another year or two, the waters going to be going over the roadway,” Castillo said.

Monies for the proposed steel bridge will not come from the county’s general budget, but from the Local Transportation Authority fund.

The prefabricated steel structure will bridge the canal in a single span, as opposed to the two-span design that the precast concrete bridge had envisioned for the project. A span refers to the distance between intermediate supports for a structure.

The single-span steel structure will also make it easier to raise in 20 years, as the surrounding soil is anticipated to continue to sink, the resolution’s backup documents stated.

As such, the county is working with the Imperial Irrigation District, AT&T, the Southern California Gas Co. to address each entities’ standards for the required improvements.

“That area is extremely complex,” Public Works Director Gay told the board.

As part of the county’s overall bridge program, Gay said that county personnel are focusing on the possibility of installing additional steel structures for future projects, as well as working with the IID to help expedite delivery.

In a departure of sorts from previous meetings’ public comment sessions, only one community member spoke during the Jan. 4 meeting about COVID-related mandates.

Local resident Sky Hall Ainsworth thanked the board for its willingness to provide a safe space for community members to voice their various opinions about the various pandemic-related mandates, and for “standing up” against those who made threatening remarks during past meetings.

“Thank you for providing cool and calm leadership,” Ainsworth said. 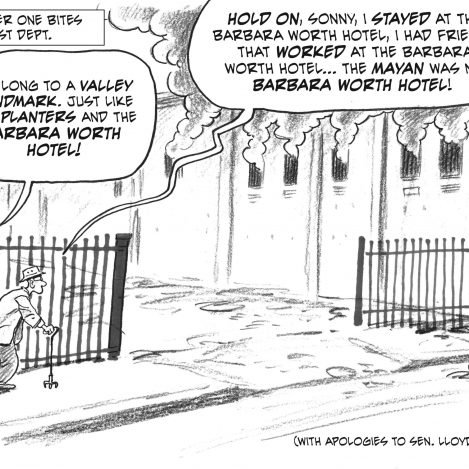