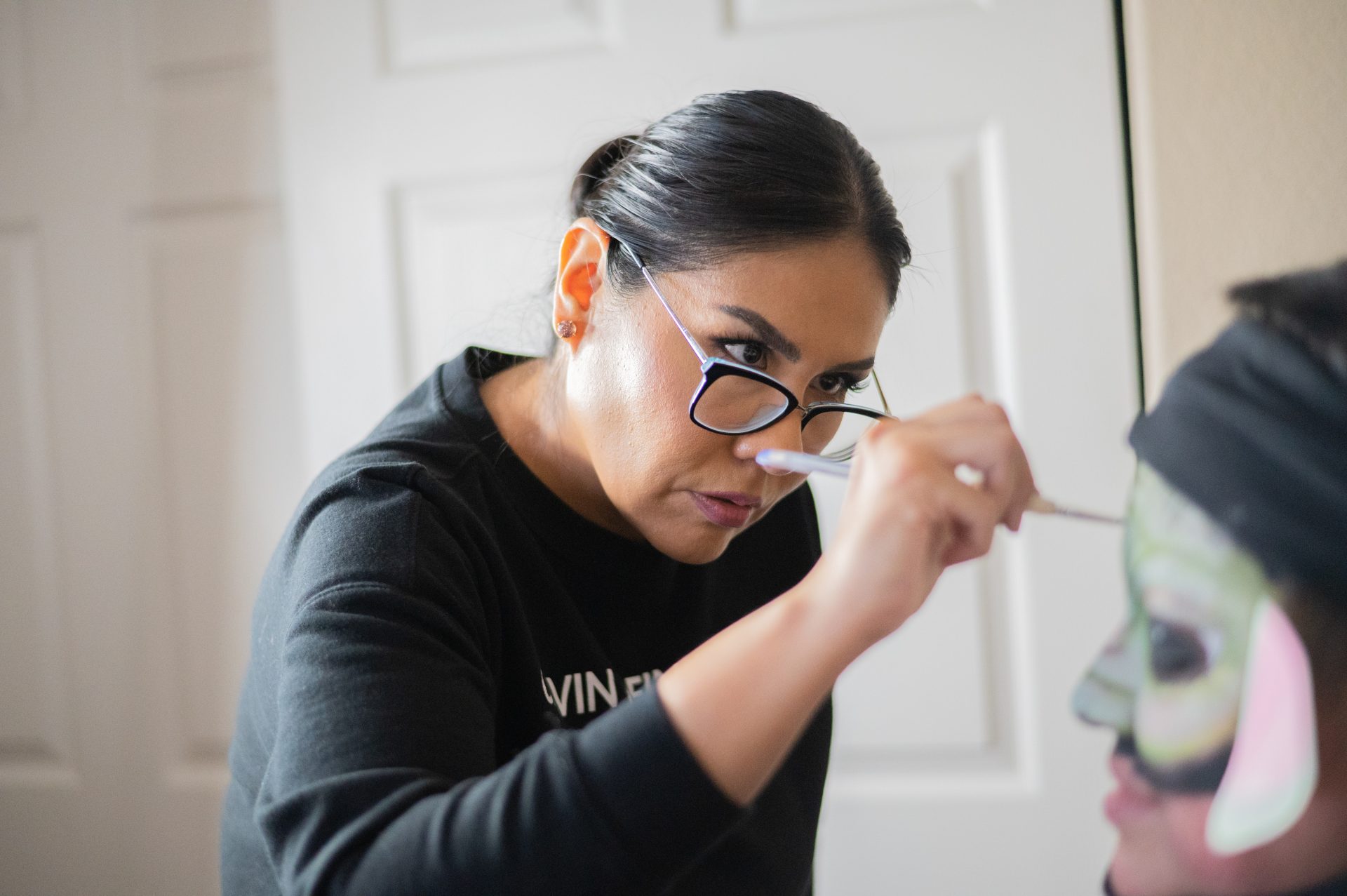 Her rotating cast of good guys and bad girls, darkened demons and brilliant angels, and everything in between combine the beauty of a makeup artist and the theatricality of movie-set makeup.

Prior to becoming a makeup artist, the Calexico High School graduate had a variety of careers throughout the Imperial Valley, including teaching, but she had always looked to art to release her creative instincts.

“I didn’t used to wear makeup until I was much older. It didn’t really interest me, but character makeup is like drawing on your face, so it felt natural to me,” Farrier said during a recent interview done in an unorthodox manner.

“We’re going to turn you into baby Yoda,” the 44-year-old Farrier said, as she agreed on a time to be interviewed at her El Centro home.

As Farrier sketches a few guidelines on my face, my eyebrows harden in glue used to flatten them down to better create the illusion of the youthful Jedi.

“In the beginning, the first few strokes are going to look weird, but trust me,” she reassured as she guided my unruly baby hairs from my forehead into a bandana.

“Baby Yoda has a little hair, so it’ll be fine,” she murmurs quietly. “Sorry, just reassuring myself out loud.”

She makes quick work of bringing to life all the elements of the image she wants projected onto my face. Soon and unexpectedly, my eyes begin to tear profusely. We both gasped waiting for all her arduous work to be ruined, but like a true professional she immediately pivoted to a solution for my weepy eyes. A waterproof pencil quickly replaced the water-based paint and saved the artwork.

Her Journey to a Skilled Artist

Farrier has been doing makeup professionally since 2018. After receiving certification at New York City’s Academy of Freelance Makeup, she jumped at the chance to take part in New York Fashion Week as a makeup artist painting looks on runway models.

“That was a great experience for me. It was three intense days of working in the industry. It felt good to be there,” she said.

New York Fashion Week is an eight-day event sponsored by major corporations such as Pepsi, BMW, and Perrier, in which international fashion designers display their collections.

In 2019, Farrier completed the advanced course in character makeup from the Los Angeles Cinema Makeup School.

“They teach you how to create the illusion of wrinkles, scars, wounds, anything for television and movies,” she said.

Farrier, who isn’t married and has no children, has never really left the Valley, just temporarily relocated to earn her certifications. Confident in her skills, Farrier admits that there were moments where she wondered if it was even a promising idea to pursue makeup as a career. But when moments like that arise in her mind, she said is comforted by the recognition she gets for her talents.

Although the prize was a great amount, Farrier felt pride in winning a makeup contest in October sponsored by Melt Cosmetics, a multimillion-dollar makeup company based in Chatsworth. She entered the contest done up as “La Catrina,” a traditional image of a dead aristocratic woman in a large, feathered hat, in Día De Los Muertos lore.

Cold mint paint starts to spread onto my face and soon the image of baby Yoda appears. Elisa has created the illusion of a tiny chin at the tip of my nose, and she conceals my lips from view under a dark scarf to reveal the transformation into a tiny-faced baby Yoda, complete with huge glaring eyes painted on my eyelids so that when I close my eyes, the image flawlessly appears.

I look at myself in the mirror and somehow can only see the illusion.

After snapping pictures, I strip away the makeup. The waterproof eyeliner is stubborn, but I manage to take it off with a cream-based makeup remover. All of these after-makeup actions are foreign to me because I have only worn makeup five times in my life, this being the fifth.

“I did, but how do you feel knowing all your hard work literally went down the drain,” I ask while I dry my hands.

“It’s great, because you become another blank canvas for me,” she said with a smile.

There’s no worry about her creations washing down the drain when they are committed to social media, for all to enjoy. And they are being enjoyed more and more.

Farrier’s Instagram page, @elisa_diana_f, has nearly 1,000 followers, but it’s on TikTok, under @elistars7, where she is getting greater notice.

On TikTok, Farrier has nearly 2,000 followers and is building her cachet, but one of her videos has more than 273,300 views and more than 23,500 likes on a video where she recreates the face of character, Tiffany Valentine, Chucky’s wife from the movie “Child’s Play 2.” The short clips, under three minutes, are a mix of visual and audio content chosen by the makeup artist, to give just the right amount of spotlight to the artistry in the makeup.

Elisa enjoys social media to help her display her work but is craving more access to other makeup artists who want to do creative looks as opposed to more traditional “beauty” makeup.

Finding likeminded individuals is important to Farrier because she points out that art is meant to be shared and discussed between people.

“I enjoy doing beauty makeup, and before the pandemic, I had clients who come to get their makeup done for special occasions, but I really want to find those makeup artists who want to do more creative looks,” she said. “I want to meet other locals who are interested in this, maybe teach a class.”

Previous
Aztecs, Down 2 Starters, Clamp Down on Defense to Beat UNLV 62-55 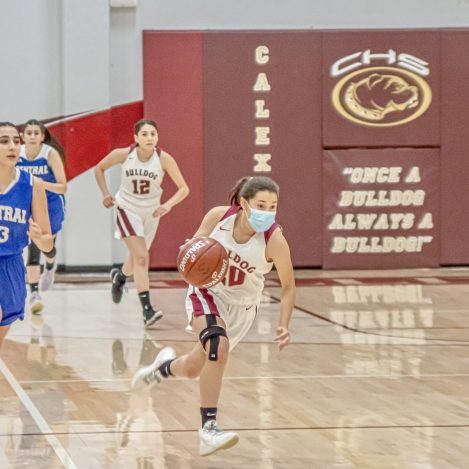