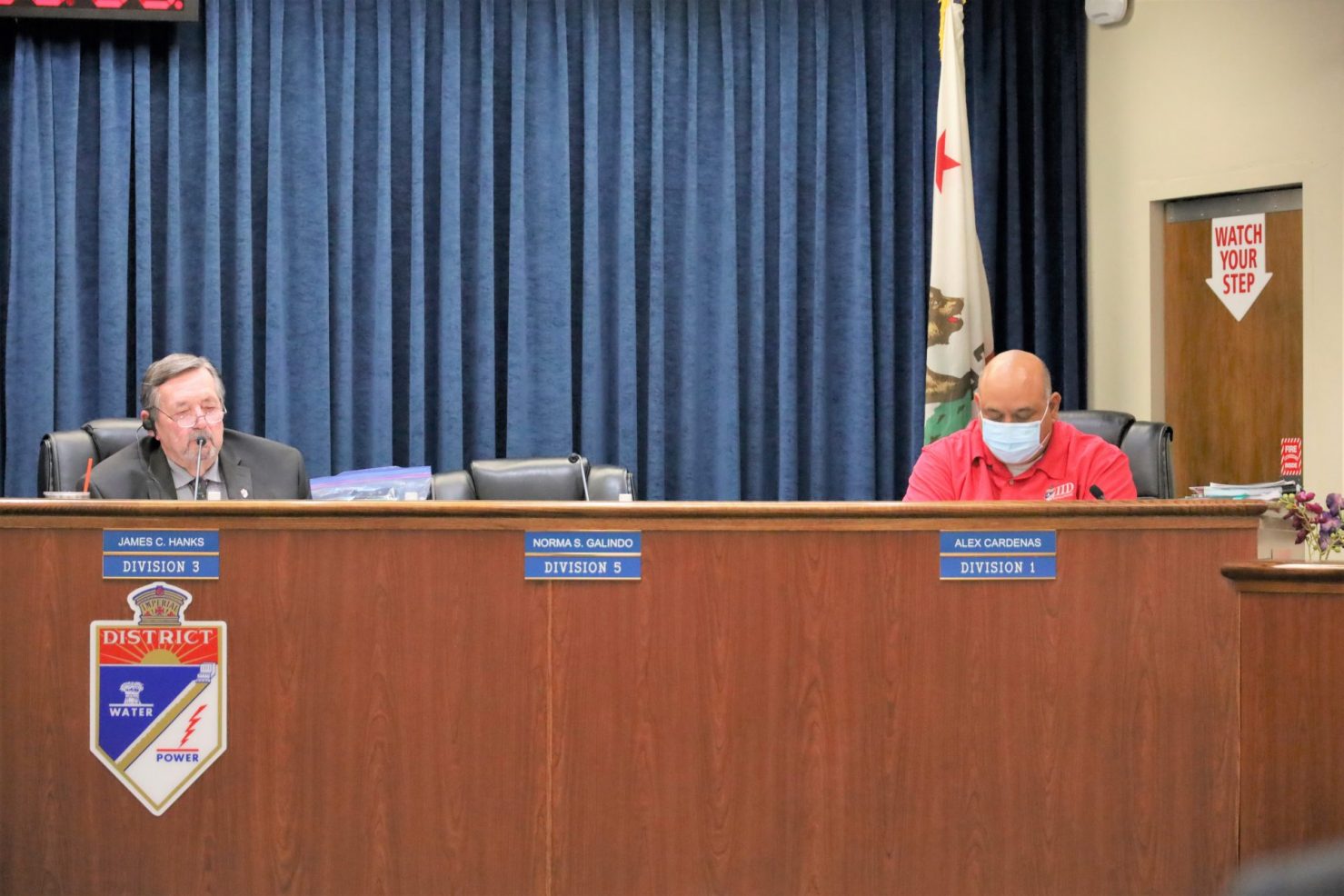 Imperial Irrigation District President James C. Hanks was re-elected as president and Division 1 Director Alex Cardenas was elected vice president in a board reorganization that took on much drama and theatrics during the IID meeting on Tuesday, Dec. 21. | PHOTO COURTESY OF IID
Home
Regional News
In Regional News

EL CENTRO — The Imperial Irrigation District Board of Directors elected new board officers on Tuesday, Dec. 21, for the 2022 calendar year in an action item that should have been ceremonial and largely uneventful.

But the dramatic, 30-minute discussion was marked by lofty language, veiled insults, and subtext worthy of a soap opera. It overshadowed the general manager’s contract renewal with a hefty salary increase and the approval of next year’s operating budget.

It would have been reasonable to expect Hamby to slide into the presidency in the course of ceremonial board reorganizations. By most accounts, he spearheaded the IID’s defense against Assembly Bill 1021, a legislative effort to place people from outside the Imperial Valley on the district’s board of directors, legislation that observers expected Gov. Gavin Newsom to sign into law. He didn’t.

The board’s successes punctuated a challenging year marked by infighting and disputes.

Division 5 Director Norma Sierra Galindo accused Hamby in April of meeting with and advising his committee appointees on what to do. She also alleged that board members met with Assembly member Chad Mayes, the author of AB 1021, without reporting back to the board.

Division 4 Director Javier Gonzalez, who has been known to throw bombs on his official and personal social media accounts, targeted Galindo in October on her attendance record at Board of Directors meetings, accusing her of being absent from most meetings despite efforts to accommodate her work schedule.

The IID’s board governance manual states that the president and vice president should each serve one-year terms, with elections to those positions rotating from member to member “based on the seniority of board members who have not most recently served.” There are exceptions, chief of which being that the nominee for president must have first served at least two years on the board.

But the board suspended policy G-15 in December 2020, leaving the door open for any of the five directors to be president. But their personal disagreements meant that only Hanks would secure the three votes necessary, even though he initially said he did not want to serve another term as president.

“I believe that a board president should serve two terms, one in office and one in prison. I’m ready for a break,” Hanks responded.

“If that’s the case, then I’d like to make a motion to appoint Mr. John Brooks Hamby as president for the 2022 calendar year as president of the IID board,” Gonzalez replied.

Hamby’s nomination was met with silence.

“We have a motion, is there a second?” Hanks said.

Cardenas hesitated, but with some urging from Galindo and Hanks, he seconded Galindo’s motion.

“I’d like to make it public that if I have a president I’m going against, I’m going to have to excuse myself from every (project labor agreement) closed meeting,” Gonzalez retorted.

Gonzalez was referring a set of project labor agreements between unions and the IID approved by the previous board in December 2020 and subsequently voided by the current board for being “vague” and “unclear.” Three of the unions sued the district over the decision to void the agreements, and Galindo and Cardenas submitted affidavits supporting the lawsuit.

Only two directors voted in favor of Cardenas’ nomination for president—Galindo and Cardenas himself. Hamby and Gonzalez voted against the nomination citing his involvement in the PLA lawsuits. Hanks abstained, and the motion failed.

Hamby immediately spoke up and nominated Hanks for president.

“I second that motion,” Gonzalez said. “I think that’s the best thing that you can do for the board, Mr. Hanks, and you’re going to be retiring happily.”

“President Hanks, there is a motion and a second,” Cardenas said.

“You know, it’s a funny thing what God does to a man. Things you swear you won’t do you seem like you always have to do it,” Hanks replied.

The former director of the Imperial Valley Vegetable Growers Association and the Coalition of Labor, Agriculture and Business, Kay Pricola, stepped to the podium and urged Hanks to accept the nomination.

“You’ve heard from your fellow board members today what they believe is best, and I believe you ought to move forward and continue to do what’s best for this agency,” she said.

“I just want to publicly say that I am in full support of you being president of the IID and here to make your life easy and help you with that burden, sir. Let’s do it,” Cardenas said.

Director Galindo, are you in support of that?” Hanks replied.

“Do you want me to be your vice president, is that what you’re saying,” Galindo responded, which was met by laughter in the auditorium.

“I am very disappointed that you did not vote on Alex but I will support you 100 percent,” Galindo continued. “I think that you and or Alex can get us through because you have the knowledge and the maturity to stick within a meeting and not walk out when things don’t go your way. So I will support you 100 percent. I told you some months ago that you would see us through this, and you have, and I think you need to continue to see us through this.”

Hanks responded with a monologue that began with his background as an educator with the Calipatria Unified School District, addressed some of the infighting and disputes on the board, and touched on Hamby’s predecessor, former Director Bruce Kuhn with remarks that appeared to be aimed at the young director himself.

“I still think I’ve got a little bit of experience and background that I can help this board with,” Hanks said. “I don’t need accolades. Everybody’s got an ego. I don’t so much because I’ve had my moments, good and bad, in my life. So, I would really like to see this board come together regardless who’s president and pull some things together.”

“As a people, this board has a lot of talent in different areas. We all don’t communicate as well, we all have different backgrounds, but there’s a time and place for everybody on this board that has their moment,” Hanks continued. “I used to be amazed at Bruce Kuhn. Bruce likes to tease and cut up and everything, but you got into a closed session on business situations, he had a very keen mind that was very valuable to the board. And it’s the same way here. Some are new, some have different backgrounds, different desires what they’d like to see in the community, but they’re all legitimate.”

Cardenas was elected board vice president in a 3-2 vote marked by similarly grandiose language. Gonzalez and Hamby voted against Cardenas’ nomination.

“I’d like to say that it’s been my pleasure to serve in my capacity over this past year. I think I am leaving the district in a better place than it was before. I’ve had the privilege to work with President Hanks over this last year,” Hamby said.

“I think one of the reasons that this last year has been so productive is that we took the board in an entirely different direction. And while certainly we all aim and strive to be able to work together, it wasn’t always that way. I think I can personally attest to having been on the receiving end when those words were not really reality. So, I’m thankful for the opportunity to have served in this time. I think we’ve taken the district in a far better direction,” Hamby said.

“I am pleased to have left it as I do now, but I do not, in my personal capacity, believe that I can honestly and sincerely support those who are engaged in active litigation against the district, and have violated their fiduciary duty to this organization,” Hamby continued.

The board re-elected Belen Valenzuela as board treasurer and Raquel Najero as board secretary, and took a brief break, at which point Hamby left. Rumors surfaced almost immediately that he had resigned, which he denied when reached by telephone.

The board extended General Manager Henry Martinez’s employment contract for two years with the second year being a month-to-month term which either party can terminate with a 90-day notice.

“The annual salary in this contract is $388,000. All other compensation terms remain the same,” Hanks said. “It should be noted that the proposed compensation is in line with an executive compensation survey of utility executives by the Large Public Power Council in the western United States that the board has received.”

Gonzalez was the sole director voting against the motion.

“I don’t have a problem with our general manager, I will give him two more years, but I won’t be approving an 18 percent salary raise. I’m ready to approve whatever we approved to our employees, and that’s my position,” Gonzalez said.

The board approved the IID’s operating, capital and staffing budget plans for 2022 with little discussion.

The balanced budget does not have any changes to projected unrestricted cash balances. It projects cash on hand for 132 days of operations.

About $273 million are budgeted for Energy Department capital projects, which include a battery energy storage system, the purchase of the IVC Solar Farm as well as several transmission and distribution line upgrades.

About $37.5 million are budgeted for Water department capital projects, which include concrete lining projects, drain structure work and Imperial Dam upgrades. Approximately $17 million are set aside for the IID’s System Conservation Program.

The board also approved a schedule to revise and update the district’s reserve funds policy, which hasn’t been changed since 2009. The first hearing is scheduled for Jan. 5, 2022. 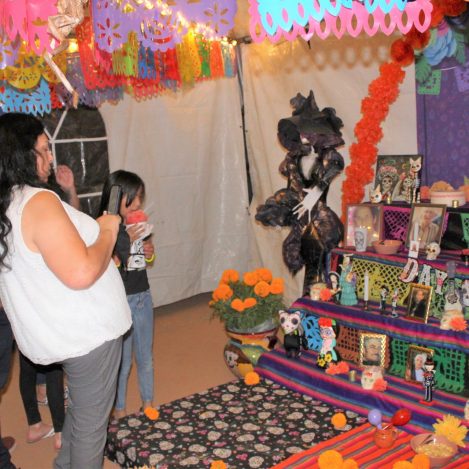