Spanish
It’s a familiar story for businesses along the U.S.-Mexico Border: financial devastation due to the pandemic and border closures. But one chamber of commerce is trying to help store owners recover quickly. | VIDEO CAPTURE
Home
Business
In BusinessLocal News

CALEXICO — It’s a familiar story for businesses along the U.S.-Mexico Border: financial devastation due to the pandemic and border closures.

But one chamber of commerce in Imperial County is trying to help store owners recover quickly.

Downtown Calexico is a string of small retail stores owned and operated by local families just north of the US Mexico port of entry. They rely heavily on customers coming up from Mexicali.

But since border crossing restrictions were put in place, business has been incredibly slow.

That’s how David Dahdoul, the store owner of Kasa Imports, describes this past year.

He said the lifting of restrictions in early November hasn’t brought back many of his old customers.

From the pandemic, border closures, supply chain issues and an increase in gas prices, Dahdoul has taken hit after hit.

About 70% to 80% of his customers come from south of the border in Mexicali, Dahdoul said.

He believes long wait times and vaccine requirements have discouraged many people from crossing the border to shop like they used to.

Just a block down from Dahdoul is Francisco Beltran’s store, Lulu’s Moda.

“We were hoping for more sales and more people to come but we still haven’t received the people we were waiting for,” Beltran said.

About 80% of his clients are also from Mexicali and 20% are local shoppers, he said.

“Regrettably locals don’t shop here,” Beltran said. “The people who come here are people from Mexicali, we make a living from the people in Mexicali.”

Walking through the streets of downtown Calexico, you can see stores that have gone out of business during the pandemic.

“You would see empty parking lots often and that’s heartbreaking. Those are businesses of people that are trying to be successful,” said Bari Smith Bean, vice president of the new Imperial Valley Regional Chamber of Commerce in El Centro.

The chamber opened in September, but had been in the works for nearly 2 years. The regional chamber combined the El Centro, Imperial, and Westmorland chambers of commerce.

United as one, Bean said they’ll be able to make a bigger impact in Imperial County and they’re hoping to reach neighboring cities like Calexico.

“Now more than ever businesses just need our support,” she said.

Calexico’s chamber of commerce closed down during the pandemic leaving Calexico businesses to fend for themselves and find outside help.

“I think we really need to launch into this new year with the chamber, Bean said. “We want to launch some of those initiatives where we can really say show us what you are doing and let us help you evolve because there are ways where you can reach more people.”

The regional chamber represents about 300 businesses in the region.

Although some business owners like Dahdoul and Beltran haven’t seen an uptick as they wanted, Bean said overall there has been an increase in traffic flow coming into the county.

As some businesses have closed others have thrived, she said.

“There’s been success stories as well during the pandemic, but I think the biggest thing we have to do is support our local businesses,” Bean said.

According to the National Retail Federation, sales are still down compared to pre-pandemic levels, but stores saw an increase in foot traffic compared to last year.

During Thanksgiving week, Beltran didn’t see many customers, but he said he remains hopeful that things will pick up during the holiday season.

This story by Alexandra Rangel first appeared on KPBS San Diego on Monday, Dec. 13, and was produced with support from the Economic Hardship Reporting Project. 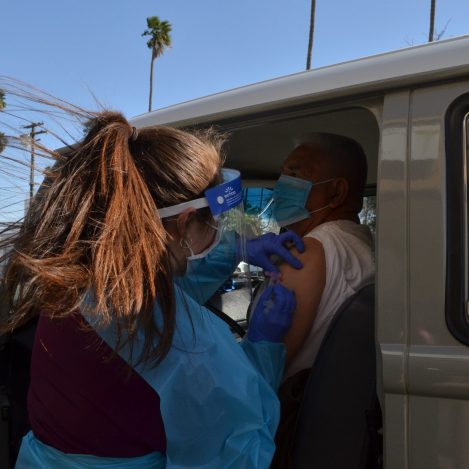