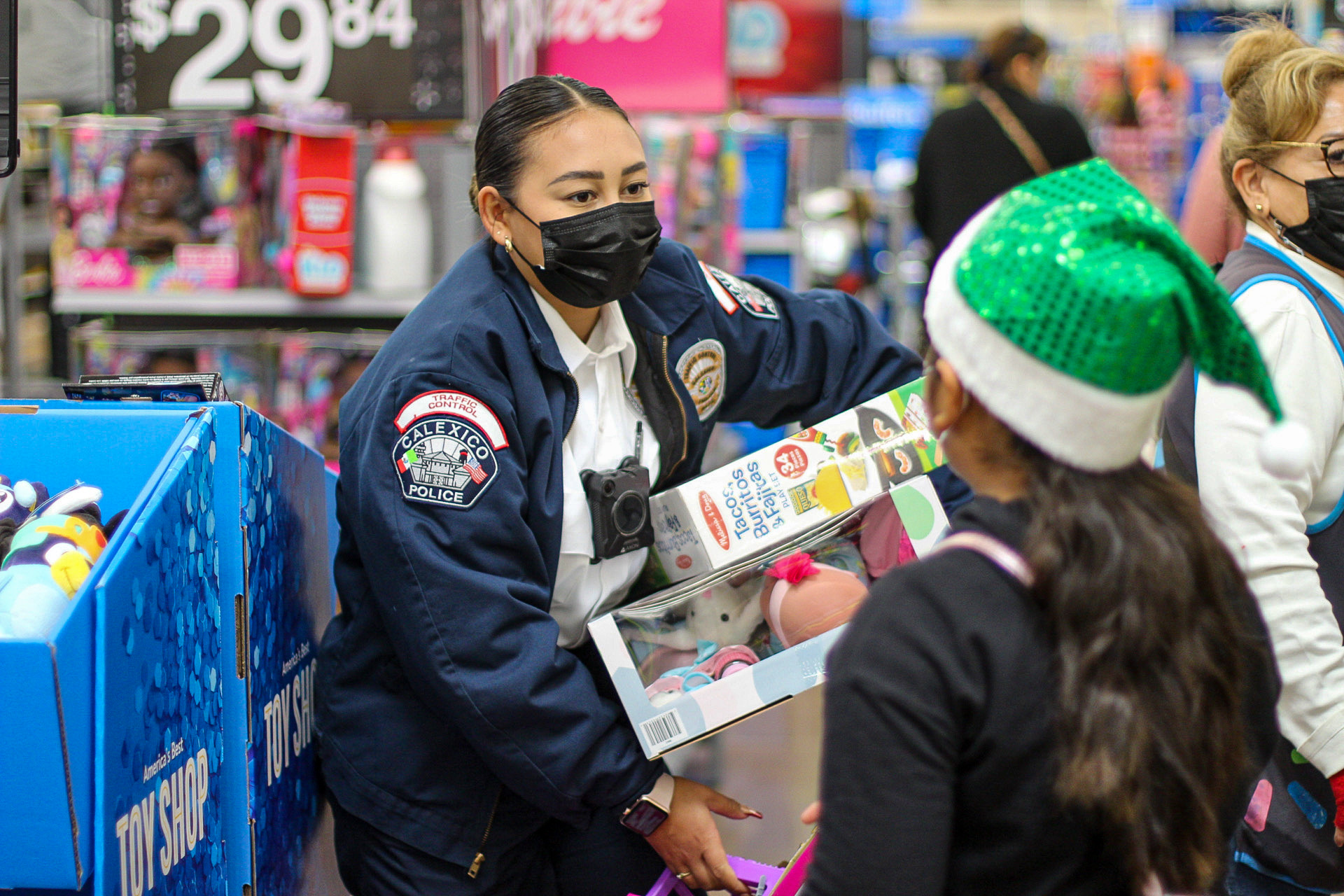 Kenya Salcido, a Calexico traffic controller, juggles the toys picked by the child she was paired with during the 18th annual Kids ‘N’ Badges on Tuesday, Dec. 14, in Calexico. | MEGAN JONES PHOTO
In Local NewsPublic Safety

CALEXICO — More than 30 Calexico children were dropped off by their parents at Denny’s, where they spent the next couple of hours in the company of cops and firefighters, eating breakfast, singing Christmas carols, and going on a shopping spree as part of the 18th annual Kids ‘N’ Badges.

The Tuesday morning, Dec. 14, event began at the restaurant where in lieu of the usual musical entertainment, soon-to-retire Police Chief Gonzalo Gerardo and Kids ‘N’ Badges coordinator police Sgt. Victor Legaspi encouraged a singing competition between the children and adults.

“Jingle Bells” soon rang out through the banquet room of Denny’s to children’s giggles as the adults entertained them with a lively rendition of the classic Christmas ditty.

Soon the breakfast platters started to arrive, and the wait staff pulled in reinforcements from the Calexico Fire Department to get the now-filled banquet room fed.

“As public servants, we are here to serve the community,” Calexico Firefighter and Paramedic Jose Duarte said. “Being able to help out and putting smiles on these kids’ faces really feels good. We’re here in a supportive capacity, helping with serving plates and drinks is new for a lot of us, but a lot of fun to be able to see the children having a good time.”

The children marveled at the coordination between the trained wait staff and the newly recruited uniformed volunteers.

“I didn’t know cops and firefighters could be waiters,” a third-grader chuckled between bites of pancakes as their table roared with laughter.

Kids ‘N’ Badges is a collaborative event that the Calexico Police Department puts together every year with the help of the Calexico Unified School District’s Family Resource Center, which is charged with compiling a list of students for the event.

“The FRC provides the students and they (Calexico police) provide the money,” said Hortencia Armendariz, coordinator of the Family Resource Center, who has been assisting with Kids ‘N’ Badges as long as it’s been in existence. “It’s always a blessing to see everybody who is willing to help our students.”

Legaspi said the funds for the event were provided by Calexico businesses and organizations such as the Calexico Rotary Club, Sun Community Federal Credit Union and Antunez Shell LLC, among many others.

After breakfast was over, the children were shuttled in a school bus from Denny’s by police escort, lights and sirens blazing, to the empty parking lot at Ashley Furniture Outlet, where a shiny red REACH helicopter stood in for Rudolph and his team of reindeer, landing in the dusty parking lot while the kids peered out of closed school bus windows to keep out all the flying dirt kicked up by the helicopter.

As the tan blanket of dirt settled with the slowing of the helicopter blades, the students trickled out of the bus to meet REACH’s cheerful cargo, the one and only Santa Claus, who was ready for photos with the kids. The children joyfully returned to the school bus once they had made their requests to Santa and were ready for their final holiday destination surprise of the day.

The children arrived at Walmart Supercenter in Calexico and were each given a $150 gift card to enjoy a shopping spree. Paramedic Duarte was among others who helped the students with their purchases. Each kid was paired with a cop, firefighters, Explorer or some other uniformed presence.

“The kids are enjoying spending their $150,” Duarte said. “But we are also using the experience to mentor the students as they navigate through the store by talking to them about the choices they’re making even while they shop.”

The impact an event like this can have on a child is not lost in the chaotic cheerfulness of the shopping spree. The students selected for Kids ‘N’ Badges by the Family Resource Center are among the neediest, Armendariz has said. During a previous interview she said 36 children were selected to participate.

“There is a need in our community,” Calexico Recreation Department manager Norma Gerardo said, who was at event assisting, along with other city staff. “The more that we do as a city to interact with each other, the more we get to see what the need is and address it.”

Service to the community seemed to be the theme of the occasion. Several public servants in attendance shared their thoughts on what they saw happening as the once-nervous children soon talked freely and even played around with the uniformed attendees.

“I’m here to give back to the community,” said Alex Valladolid, a 10-year Calexico police officer, as he helped his assigned child load his bags in a cart. “We spend volunteer time with the students to get to know them and their parents and be out more in the community. So, they can see us and call on us when they have trouble we can help with.”

The Imperial Regional Detention Facility run by Management and Training Corp. supplied transportation for the volunteer employees who helped distribute 31 bicycles donated by MTC. The bicycles were distributed to students as their final present after they received a helmet from the Calexico Fire Department to enjoy their new rides safely.

The bicycles and helmets soon found their child owners spinning in circles in the closed off east parking lot at Walmart.

Calexico Fire Department had to the task of delivering bicycles for children whose parents were happily surprised but unable to transport so many white plastic sacks filled with toys as well as the brand-new bike.

While one of the main purposes of Kids ‘N’ Badges is to provide a special holiday season to some of the neediest children in Calexico, Sgt. Legaspi said the event serves another purpose beyond serving the neediest.

“These kids may have had some police officers in action near or around their home and after being with them they get a different perspective about what police officers do,” Legaspi said. “This is one of the reasons why we do it, to serve the community.”