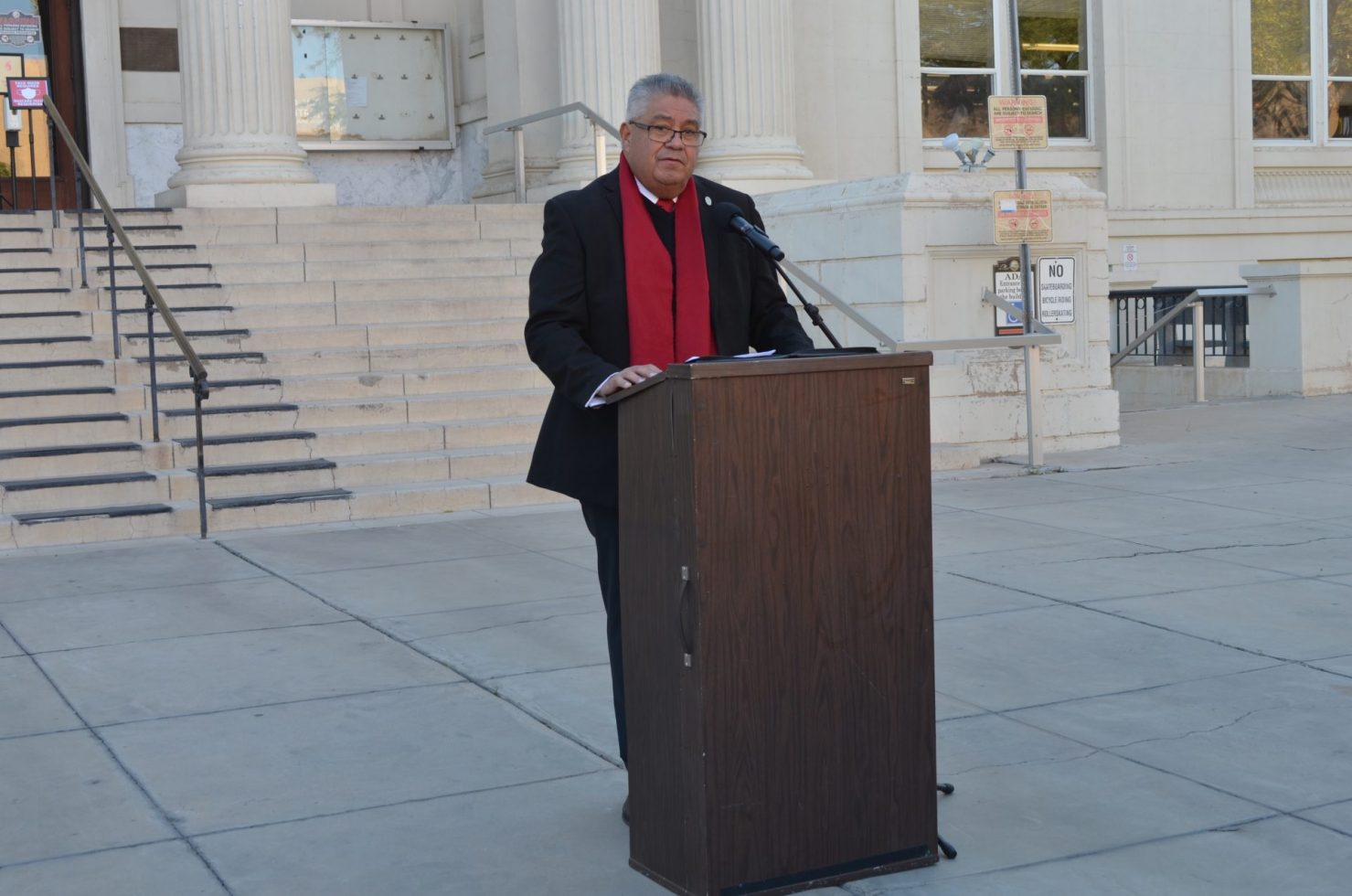 Imperial County District Attorney Gilbert Otero announces that he will not seek an eighth term in office and through his support behind Deputy DA Mario Vela during a press conference in front of the County Courthouse in El Centro on Wednesday, Dec. 15. | JULIO MORALES PHOTO
Home
Public Safety
In Public SafetyRegional News

EL CENTRO — When Imperial County District Attorney Gilbert Otero had first ran for office in 1994, and won, his intentions were to only remain for two terms, with the voters’ consent.

Yet, that anticipated tenure turned into three, then five and eventually seven four-year terms following his most recent successful candidacy in 2018.

Now, that lengthy span will come to an end in January 2023, Otero said, after deciding to sit out the June 2022 election.

“I’ve decided that I don’t want to make it eight (terms) and I’m comfortable with that decision,” Otero told a sizeable crowd during a press conference in front of the county Superior Court on Main Street in El Centro on Wednesday, Dec. 15.

As for his potential successor, Otero said that he wanted that person to be someone who cares for the victims of crime and who can bring additional energy and ideas to the office.

And in Otero’s estimation, that person is county Deputy DA Mario Vela.

“I know that the individual who should be the next district attorney and will continue, what I think, having the dignity and compassion for what we do is Mario Vela,” Otero said during his remarks to the crowd.

Vela, a native of Mexicali and graduate of Vincent Memorial High School in Calexico, was around 4 years old when Otero first won election in 1994, and has been with the agency since 2018.

“Words cannot describe how passionate I am about my job, and this is exactly why I want to become your next district attorney,” Vela told those gathered.

After concluding his remarks, which he delivered in Spanish, too, Vela then challenged any of the other DA candidates to a debate.

With Otero officially out of contention, the district attorney ballot includes El Centro council member and attorney Edgard Garcia, Otero’s sole 2018 opponent, and county deputy Public Defender George Marquez, who had also worked for the DA’s Office under Otero in the past.

Prior to seeking office, Otero admitted that he was just a 30-something-year-old trial attorney who didn’t have much familiarity with the scope of the DA Office’s responsibilities.

He also acknowledged that once he was elected to office, he had to acclimate to his new role without the help of any transition period.

Otero’s motivation to initially seek office was largely owed to the encouragement of his wife, Deborah, who had also encouraged him through the years to continuously seek reelection. Her input was also instrumental, as were Otero’s prayers and his conversations with retired colleagues, in his decision to bow out of the 2022 election.

He told those gathered at the courthouse that he is leaving office on his own terms and without any regrets or without ever having to back down to anything.

Voters were given special thanks for trusting in his stewardship through the years, while the DA Office’s staff was praised for their commitment and sacrifices on behalf of the community.

“My staff has demonstrated that they can handle anything that is thrown at them,” Otero said of the prosecutors, investigators, clerks, Victim Witness Assistance Program, and research specialists employed with the agency. “It’s because of them that my job has been easy and I thank my staff from the bottom of my heart.”

He came into office with the idea that not every offender deserved to be thrown in jail, a principle that he said he followed through with by giving people chances. Nor was he a big fan of legislative reforms that seemed to lessen the accountability of convicted offenders.

One piece of unfinished business that Otero conceded to was not being able to date to get additional classifications for his employees that would’ve help with recruitment and retainment efforts. Nor are those higher-paying classifications likely to materialize soon, without the county getting its finances in better shape and a greater level of political will.

“They should be able to do that in a fair manner for people who deserve it,” he said.

Though Otero did not express any definitive plans for after his retirement from office, he said he will continue serving the public and advocating for victims of crimes in some capacity.

‘Mario Vela for the People’

As the son of parents who were both practicing attorneys in Mexico before relocating to Calexico, Vela said that his future career path was always clear to him.

“As long as I can remember I’ve always wanted to be an attorney,” he said in a brief interview following the announcement of his candidacy.

The path to his current vocation included primary school in Mexicali, Catholic school in El Centro and Calexico, followed by a stint at Imperial Valley College before graduating from the University of California, San Diego.

After obtaining is law degree from Suffolk University Law School in Boston, Vela volunteered with the Los Angeles County DA’s Office, where he said he discovered his future lay in public service.

But it wasn’t Boston, or Los Angeles or San Diego where he said he envisioned himself litigating on behalf of the people.

“I always felt this cultural and emotional pull that drew me back here to dedicate my life to this community as a public servant,” Vela told those gathered.

Upon returning to the Valley, Vela spent some time employed with a pair of local private law firms, before being hired by the county DA’s Office in 2018.

Since then, he has prosecuted multiple jury trials and resolved hundreds of cases, including those where defendants faced charges of domestic violence, robbery, rape, attempted murder, and murder.

“I’m very tough on crime but I’m always fair,” Vela said while he was flanked at the podium by supporters, one of whom carried a campaign sigh that stated, “Mario Vela for the People.” “Anyone who worked with me can tell you that I’m always fair.”

He also offered assurances that his campaign would not distract him from the duties he was hired to perform on behalf of the citizenry of the county, and that he would do so with the same measure of tenacity, honesty, and fairness as before.

“That’s a promise I make to you all,” Vela said.

During his remarks to the crowd, Vela also vowed that, if elected, he would help further modernize the DA’s Office and its transition to paperless practices. Another area of focus would be to work with law enforcement agencies to reduce the amount of time their personnel may have to spend in court under subpoena.

“We don’t want to have cops in court every single day when they are subpoenaed, so we’re trying to streamline that so we can have better relationships with law enforcement, as well,” Vela said.

Vela said the DA’s Office’s retainment and recruitment of qualified attorneys is of the utmost concern to him. Along with DA candidate and former deputy DA Marquez, Vela had participated in a temporary strike in March 2019 that called for salaries that would better retain and recruit qualified attorneys,

“I don’t want the office of the district attorney to be a training ground for prosecutors,” he said.

As Vela continues with his campaign, he said he will seek the endorsement of other local law enforcement associations. Though Otero’s endorsement did carry significant weight.

“I am incredibly honored and humbled that you have chosen me as your successor,” Vela said during his remarks. “Your 28 years of service and dedication to this community as our district attorney will not be forgotten, I promise you that.” 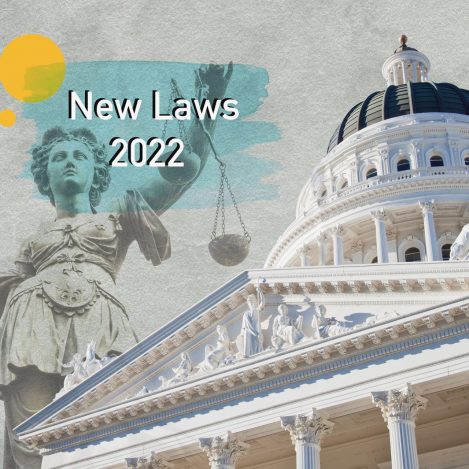 11 New California Laws for 2022, Explained in One Minute