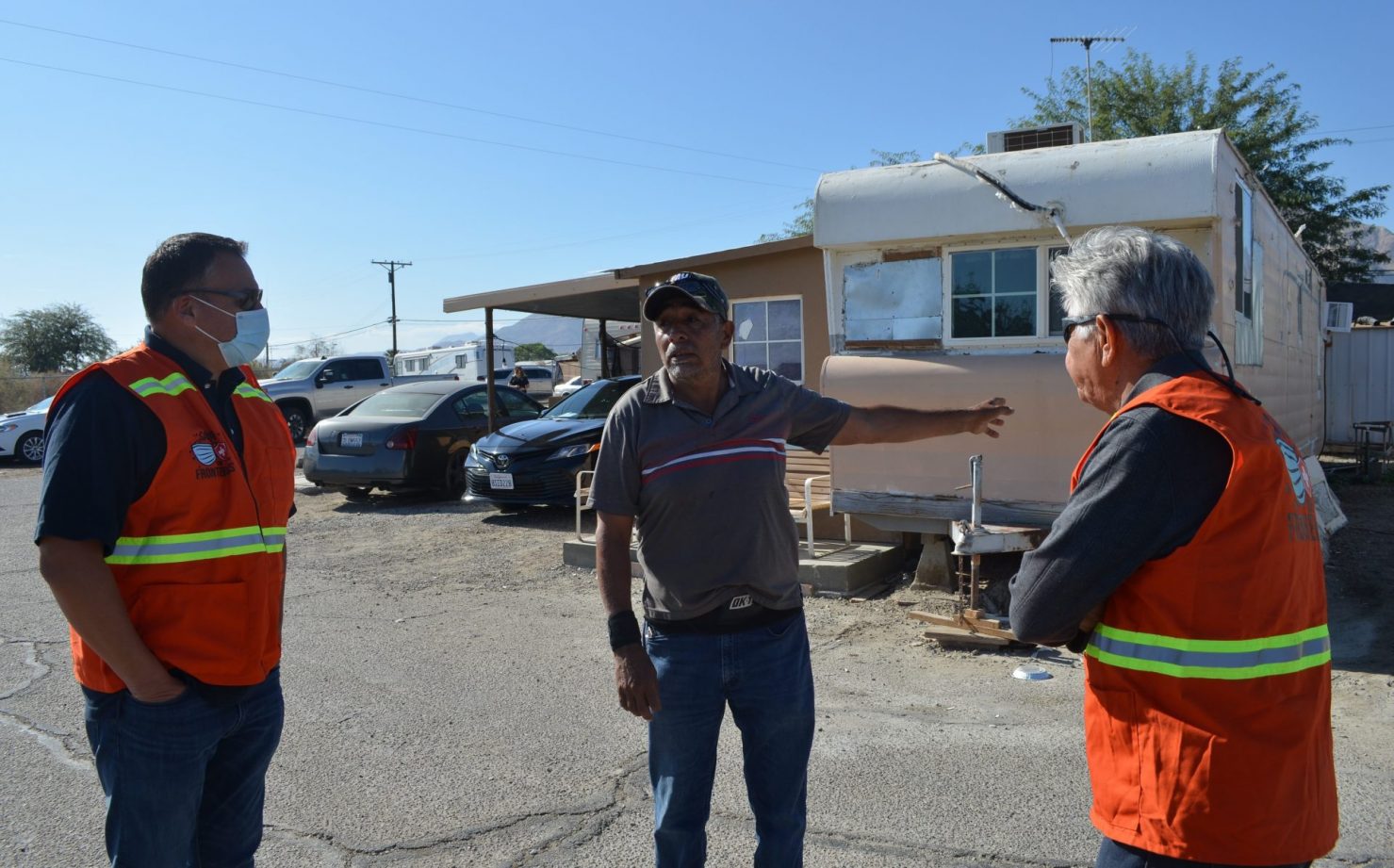 DESERT SHORES — In the nearly 10 years that Rigoberto Landero has been a resident of the Desert Shores Trailer Park, he has seen its once-green grounds deteriorate into an unkept property that management seems to accept.

The transformation dates back about five years, after the death of the previous property owner, who Landero credited with performing regular upkeep of the location. Nowadays, residents must contend with constant sewer and electrical problems with little help from the new property owner.

More troubling, though, are the structure fires that have emerged as a dire threat. The most recent one destroyed eight mobile homes on the morning of Nov. 26 and claimed the lives of a 33-year-old man and his two young children.

“My kids keep telling me that they don’t want to live here,” said Landero, who speaks Spanish. “I’m scared now. I think we’re all afraid.”

Unsurprisingly, the fatal fire elicited a widespread response from public and private entities, bringing some level of relief to weary residents like Landero and his household.

Temporary housing is in the process of being secured by the county for those families displaced by the fire. Also, monetary donations were initially provided by Comite Civico del Valle on Nov. 28 to residents displaced by the fatal fire, and subsequently to every adult resident of the trailer park on Friday, Dec. 3.

The $500 check that Landero received from Comite Civico on Dec. 3 came as a blessing. A former farmworker, Landero said an injury has prevented him from working, and his disability insurance benefit now serves as his primary source of income.

“It barely is enough,” Landero said about his disability check on Dec. 3.

In addition, the trailer park’s added scrutiny has many residents and their advocates worried that they may all soon be without homes should authorities determine that their residences are unfit for habitation.

Los Amigos de la Comunidad executive director Eric Reyes, who has visited Desert Shores Trailer Park on more than one occasion in the wake of the fire, said as much.

“Our worst fear is they would come in and start red-tagging everything,” Reyes said on Friday.

The fear of another structure fire also looms large in the minds of residents and their advocates.

The Nov. 26 fire that destroyed eight mobile homes and claimed the lives of Pedro Dominguez Dominguez, his 14-year-old daughter Viridiana Dominguez and 9-year-old son Joseph Dominguez was the fourth structure fire that residents can recall in recent years.

It remains under investigation and appears to have burned with such an intensity that its cause may not ultimately be determined, Imperial County Fire Chief Alfredo Estrada Jr. previously told this newspaper.

Prior to the fatal Nov. 26 incident, fires had struck vacant mobile homes on two separate occasions, while a third fire destroyed a dwelling whose occupants were not home at the time, residents said.

The conditions are “deplorable,” said Irene Hernandez, a Salton City resident and director of the community-based organization Rostros y Corazon, which is advocating for better living conditions on behalf of the Desert Shores Trailer Park residents.

“No other property owner would let conditions get to how they are here, because of the law,” Hernandez said in Spanish. “So, you can imagine what kind of management is here. They only care about the money and not people’s lives.”

The trailer park is one of 78 mobile home and RV parks under the authority of the Imperial County Planning and Services Department’s building inspection division.

As of the morning of Wednesday, Dec. 8, the county had yet to respond to a public record request seeking records of any potential fire and building code violations tied to the conditions or operations of the trailer park.

During his visit to the Desert Shores Trailer Park on Friday, Dec. 3, District 4 Supervisor Ryan Kelley said the conditions he observed unfortunately reminded him of similar living conditions he has seen at other trailer parks. Such conditions are often a symptom of a shortage of affordable housing, he said.

The apparent state of disrepair was enough for him to propose having the county Building Department and fire marshal do a complete assessment of the property. He repeated that request during the county Board of Supervisors meeting on Tuesday, Dec. 7.

“We need to ensure that they’re living in safe conditions,” Kelley said during his site visit on Dec. 3.

Kelley characterized the property owner as being “receptive” to the talks but noted that no substantial action has taken place yet.

The Desert Shores Trailer Park is situated in the northwestern reaches of the county. Because of its isolation from the rest of the county it is more integrated into Riverside County, said Luis Olmedo, Comite Civico del Valle executive director.

The conditions at the trailer park, located at 115 Desert Shores Drive, likely took decades to get to their current state and reflect the neglect of many previous public officials, he said.

“These conditions don’t happen overnight,” Olmedo said. “That just says that we failed them. We have to be honest with ourselves.”

In response to the needs brought on by the fatal fire, Comite Civico provided $4,000 checks to each of the seven families that were identified as having lost their home in the fire.

Because of the apparent needs within the overall community, the organization also provided $500 checks to every adult living in the trailer park.

The monetary donations totaled more than $50,000 to date and were made possible with the generous support of the California Endowment, Latino Community Foundation and Grantmakers Concerned with Immigrants and Refugees, Olmedo said.

The financial support provided to the residents is considered just the first phase of Comite Civico’s response, which is being coordinated with the county and Salud Sin Fronteras, which is made up of Comite Civico, Los Amigos de la Comunidad and Our Roots Multicultural Center, among other partners.

Comite Civico is poised to undertake a second phase of financial support in collaboration with its partners, which also includes the Coachella Valley Unified School District and state Assembly member Eduardo Garcia.

“Depending on where the county’s help stops, we’ll try to step in and help complement that,” Olmedo said. “I don’t think it takes a lot of money. It takes a coordinated effort.”

The county received approval from the California Department of Housing and Community Development to provide up to 90 days of rent and utilities assistance to the families impacted, Colio said in an email on Wednesday, Dec. 8.

Additionally, the county is coordinating with nonprofit organizations to provide additional rent assistance beyond the 90 days, as well as blankets, towels and other basic items needed to relocate the families.

Life After the Fire

Rostros y Corazon director Hernandez said her recently formed organization has been attempting to force the property owner to address the residents’ concerns for the past several months and is considering legal action.

As much as she appreciated the outpouring of support that public and private entities have shown in the wake of the fire, she questioned why it took such a tragedy to prompt people to pay attention to the plight of the Desert Shores Trailer Park residents.

“This is a tragedy that could’ve been avoided, undoubtedly,” Hernandez said.

Even so, Rostros y Corazon has found it challenging to organize the residents into action because of their collective fear and mistrust of outsiders.

“The people don’t understand we’re working on their behalf without pay because we want to see changes,” Hernandez said. “We’re going to protect them against whatever else may come their way.”

Part of that mistrust is the result of the actions of the attorney who is assisting the Rostros y Corazon organization, some residents said.

After a series of talks hosted by the organization failed to produce any results or progress, resident Roberto Gomez said he lost interest and stopped attending.

“It looked like (the attorney) was looking out for his own interests,” said Gomez, who speaks Spanish.

Gomez lived next door to the Dominguez home where the Nov. 26 trailer park fire started. He has since moved in with his son at another mobile home within the property because his home had sustained fire-related damage and was red-tagged by the county.

He was sitting outside his mobile home directly facing the Dominguez home on the morning of the fire. Gomez said he didn’t recall seeing any initial smoke or hearing any pleas for help but was alerted to the fire by its intense heat.

Gomez said he was momentarily paralyzed by fear but eventually attempted to check the residence for any occupants by banging on its doors and walls. He then turned off the power to both his and the Dominguez residence and alerted other nearby residents to evacuate.

His 12-year-old daughter was close friends with Viridiana Dominguez who, together with other neighbors, would pile into Gomez’s daughter’s room to hang out. 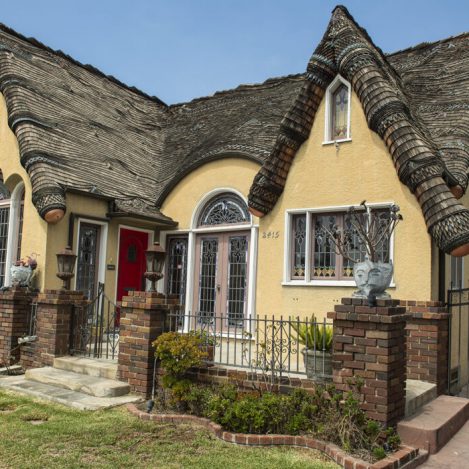