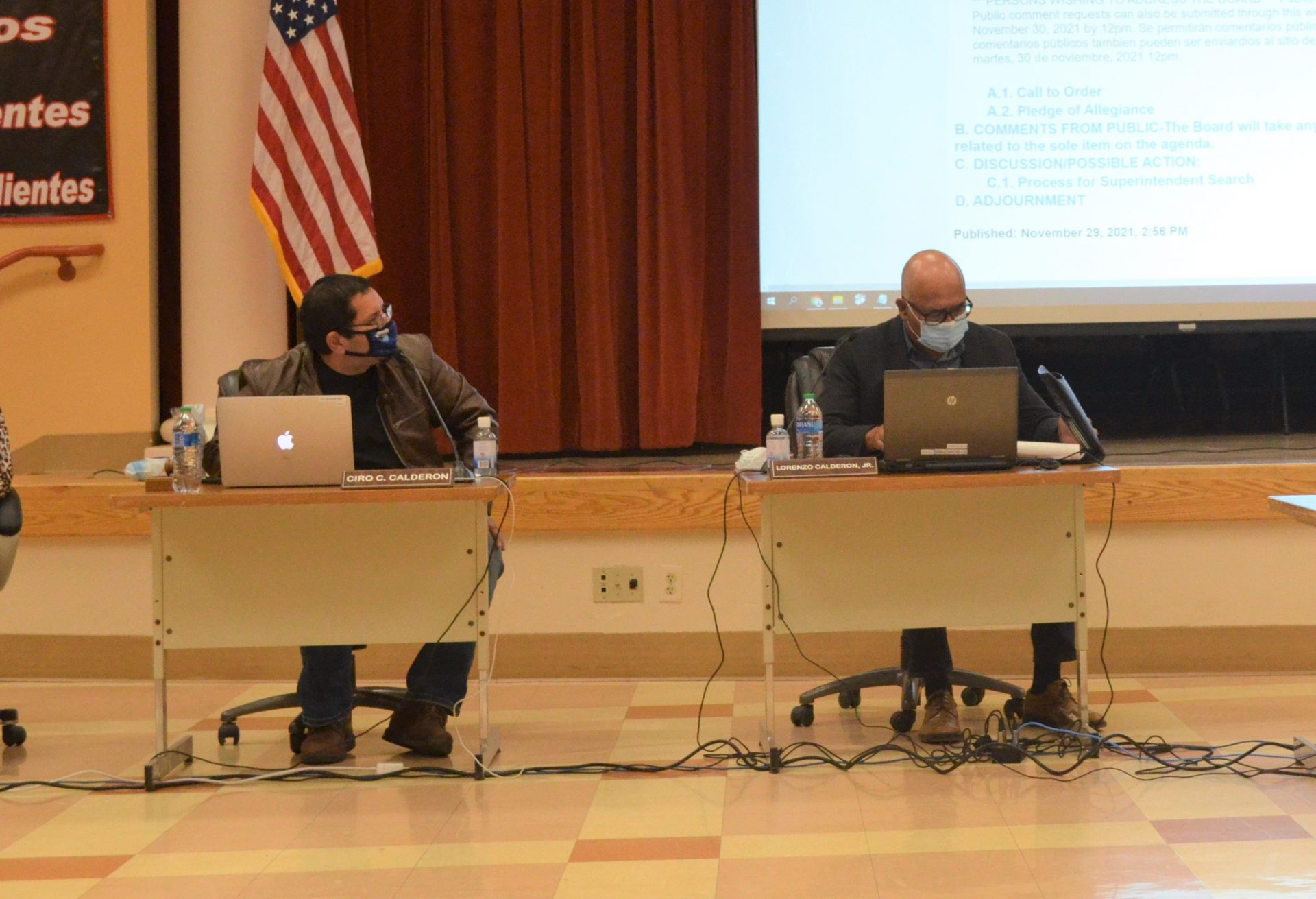 Calexico Unified School District board President Ciro Calderon (from left) and board member Lorenzo Calderon Jr. attend a special meeting on Tuesday. Nov. 30 to review options the board has available to recruit a new superintendent. | JULIO MORALES PHOTO
In EducationLocal News

CUSD Superintendent Search to Get Underway

Board Members Address Concerns Abouts its Members Raised in Probe

CALEXICO — The Calexico Unified School District will soon begin its search for a new superintendent, just as the board itself moves to address key issues that an investigation suggested had contributed to the board’s fractious relationship with the current superintendent.

Among those issues is the reported tendency of some board members to not closely follow the board’s bylaws and district’s policies, as well as engaging in behavior that apparently contributed to what a workplace investigator described as a “toxic relationship” with district Superintendent Carlos Gonzales and his executive cabinet.

“We owe the people of Calexico our best effort to make sure that we follow our own bylaws,” board President Ciro Calderon said on Tuesday, Nov. 30. “There’s always room for improvement.”

Calderon’s remarks came after the adjournment of a special meeting where the board received information from a consultant about the options available to the board to recruit a new superintendent.

The search to replace Gonzales as superintendent was prompted by the board’s 3-1 vote during a Nov. 10 special meeting to not renew his contract, which expires June 30, 2022.

Though no board member or district official has commented about the decision to not renew Gonzales’ contract, Gonzales had received notice that his performance was viewed in a negative light in a March 25 letter from the board, according to the investigation’s report.

Gonzales also had contended in the final draft of a 93-page complaint that he and his executive cabinet lodged against four members of the board on May 24 that he was ultimately given a negative performance evaluation because of the complaint.

That complaint was comprised of 55 allegations of wrongdoing by board President Calderon and Trustee Lorenzo Calderon Jr., as well as by board members Enrique Alvarado and Margarita Magallanes, to a lesser extent.

Trustee Richard Romero was not accused of any questionable behavior in the complaint, which prompted the third-party workplace investigation.

According to the workplace investigator, Carl Botterud, the district’s complaint was likely initially filed on April 19 ahead of Gonzales’ performance evaluation in an effort by Gonzales and his executive cabinet to “inoculate” him from a negative review that the board would fear would be viewed as retaliatory.

“I find it more likely than not that both sides engaged in a ‘race’ to gain an advantage over the other,” Botterud stated in his report.

Botterud, an attorney and workplace investigator based in Pasadena, was selected to undertake the investigation by the law firm of Atkinson, Andelson, Loya, Ruud & Romo, which serves as legal counsel for the district.

Following the Nov. 30 special meeting where the board was provided information about its options to recruit a new superintendent, board President Calderon said he was precluded from commenting about the allegation of retaliation because the performance review was a personnel matter.

Calderon, more than any of the other three trustees named in the complaint, was the subject of most of its allegations.

Some of those accusations alleged that he breached the confidentiality of the board’s closed meetings, and that the content and tone of his verbal and written communications with Gonzales, his direct interactions and communications with district personnel, and the use of a district credit card had violated various board bylaws.

He also disputed the investigator’s characterization of him as being “unconstrained by facts” during the probe and therefore an unreliable witness.

“The investigation is based on opinion and not on fact,” Calderon said Nov. 30 following the special meeting. “I would never lie on issues like these.”

Though the investigation sustained the allegation that Calderon misused a district credit card by spending about $315 on meal expenses for some community members and district personnel in 2019, he stated that at the time, he had the expense approved by the then-superintendent and board president.

During the Nov. 10 special meeting, the board approved a series of actions aimed at addressing the issues lodged in the complaint and sustained in the investigation.

Those actions included authorizing the use of its censure procedure bylaw to censure board members who disclose information from closed meetings, amending its censure bylaw to hold trustees accountable for violating rules of decorum, requiring trustees reimburse unauthorized credit card expenses, requiring trustees attend annual governance training and a retreat, and to have the board consider amending its bylaw requiring that board meetings do not go beyond 10:30 p.m.

Botterud, the investigator, was specifically tasked with determining whether the trustees in question had “breached their duties” as board members. The standard of proof he used relied on a “preponderance of evidence” to determine whether the disputed fact or incident was “more likely than not” true based on the available information.

His conclusions were not to be interpreted as legal findings.

Even so, Botterud concluded that Superintendent Gonzales was given a poor performance evaluation because of the district’s complaint.

In its Oct. 14 cover letter accompanying the Sept. 23 investigation report, the CUSD board highlights the report’s distinction between “truth” and the preponderance of evidence. The cover letter also offers another possible “motive” for board President Calderon to potentially mislead the investigator about whether Superintendent Gonzales’ poor evaluation was in retaliation for the complaint.

The Oct. 14 cover letter was authorized by board Trustees Magallanes, Romero, and Alvarado.

The topic of the investigation into the CUSD board’s alleged actions was hardly mentioned by any of the dozen or so individuals who spoke during the public comment session at the board’s regular meeting on Nov. 18. Nor did anyone at all mention the board’s recent decision to not renew Gonzales’ employment contract.

During the public comment session that preceded the board’s closed session, Jose Guillen asked the board whether any action was going to be taken against board President Calderon, based on the investigation’s findings that sustained many of the allegations against him.

Guillen did not receive any response from any school official.

Maria Bravo, a CUSD classified employee of more than 20 years, spoke about the investigation both prior to the board’s closed session as well as later during the meeting.

In the first instance, Bravo said she was grateful the board had disclosed in June the complaint that the district’s executive cabinet had filed against the board, which prompted the subsequent investigation.

Yet, she was disappointed when the board chose not to publicly release the results of the investigation during the board’s Nov. 19 meeting, and afterward made it solely available to the public by filing a formal public records request.

“I take this as censoring the public, from speaking for or against the document,” Bravo said. “That was not transparency.”

During her second public comment appearance, Bravo highlighted the fact that the investigation sustained about 90 percent of the allegations contained in the complaint.

She also expressed dismay that the investigation’s findings determined Calderon’s credibility was lacking.

“It’s shameful, it’s disheartening,” Bravo said. “You’re supposed to be our role models and I don’t see that happening.”

During the Nov. 30 special meeting at Cesar Chavez Elementary School to discuss the new superintendent’s recruitment options, Calderon was just one of three board members present.

He was joined by Trustees Lorenzo Calderon Jr., and Enrique Alvarado. Board members Margarita Magallanes and Richard Romero were absent, as was Superintendent Gonzales.

Both Calderon Jr. and Alvarado declined to comment about the investigation report or the allegations against them.

Calderon Jr. was accused of approaching the contractor tasked with Calexico High School’s construction of a new 16-classroom building in a “rather aggressive, threatening, and hostile manner.”

Calderon Jr. was also alleged to have attempted to investigate an incident where a high school administrator was stuck temporarily in the elevator of the new classroom building, even though he reportedly has no authority as a board member to initiate such an investigation.

As for Trustees Alvarado and Magallanes, they were alleged to have sided with both Calderons, who are not related, in pursuit of questionable and unprofessional actions whose purpose was to discriminate against Superintendent Gonzales.

One of those alleged actions include the manner in which the board presented Gonzales with his evaluation on April 29, which reportedly did not allow him the opportunity to provide input.

Despite the investigator’s findings that both Alvarado and Magallanes were “unreliable” narrators and overtly biased against Gonzales, neither was found to have breached their duties as trustees.

The investigation report did not make any explicit recommendations but did suggest that board members should mind their actions.

As for the planned superintendent recruitment efforts, consultant Alan Robinson advised the three board members present during the Nov. 30 special meeting that the board had three options that it could choose from.

Robinson advised the board members present against having the district conduct their own search because of its time- and labor-intensive process.

And while contracting with a specialized firm typically brings in the most qualified candidates, it is the pricier of the available options. A less-expensive options would be the assistance of a facilitator, Robinson said.

Regardless of which option is selected, Robinson recommended having the community and stakeholders provide input about what it would like to see in a qualified candidate.

“That information is important for you to take in for this process,” he said.

The recruitment process can take anywhere between four to six months, depending on the options selected.

The board members present did not take any formal action and decided to recall the matter in the presence of all five board members at an upcoming board meeting. 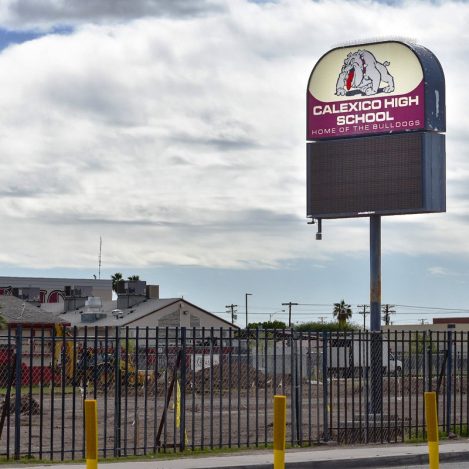