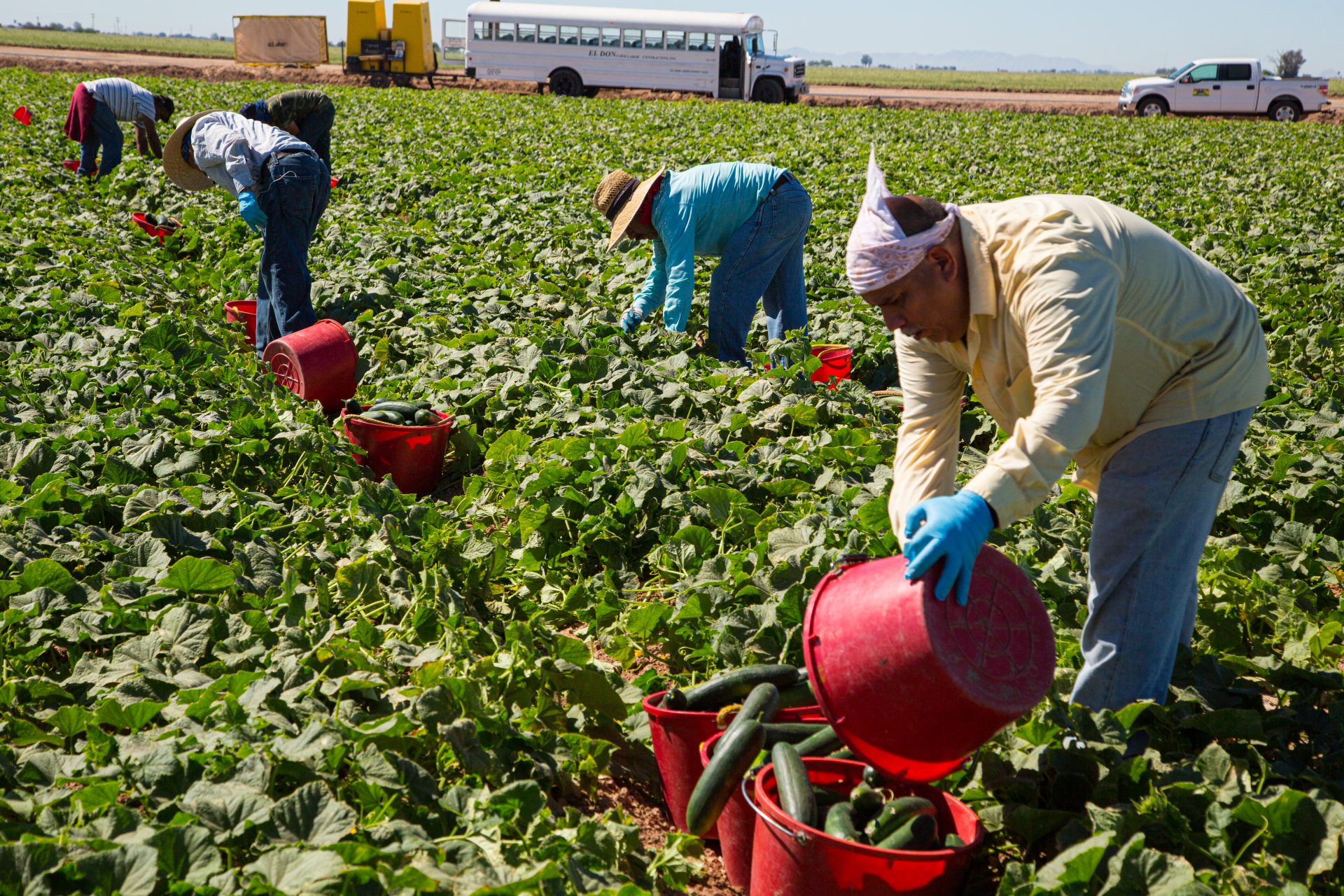 Farmworkers in Imperial County toil in a cucumber field in the years before the pandemic. | ALEJANDRO DÁVILA FRAGOSO PHOTO
In AgricultureEducationLocal News

CALEXICO — It was the second semester of the 2020-2021 school year, as regular as a morning could be during the height of the COVID-19 pandemic, and Yara Yareth Araujo, a Calexico High School junior at the time, had just gotten her siblings up for online classes.

Their mother had already gone out to the agricultural fields to work for the day and Yara was in charge of her younger siblings while the whole family was staying in Coachella.

Nothing was going right that morning. The internet was not working, her siblings had lost the chargers for the computers, there was no way to log into class on time, and their mom was not there to help.

Yara was so stressed she was ready to throw in the towel for the day.

But then, without really thinking about it, Yara said she was knocking on the neighbor’s door asking for their Wi-Fi password.

“I think I might have said ‘Hi, hey, good morning,’ but at this point I was too stressed to think about how rude it could sound or how disrespectful it would be to just be asking her for the Wi-Fi password,” Yara said, “but she said yes and gave it to me.”

Even though she and her siblings were all able to log into class that day, 17-year-old Yara remembers still being frustrated thinking, “If we weren’t here, this wouldn’t be happening.”

Yara is the third child of six in her household, and a child of migrant farmworkers. Her grandmother worked in agriculture, a single mother who was trying to support her family. Yara’s mother does the same, traveling with the crops as the jobs change to different places while bringing her family along with her.

It has created a stressful, difficult childhood for Yara and her siblings, but her story touched the Imperial County Office of Education Migrant Education Parent Committee, which recently her to be the 2021-2022 Migrant Honor Student of the Year for the Imperial County.

The Migrant Honor Student of the Year is awarded to the student with the most moving story and academic background. Part of the interview is the student’s story, how they have overcome their situations, and what it means to be a migrant and to pursue their education. Migrant parents who are part of the Migrant Parent Committee in the Valley are the ones who conduct the interviews.

“These are all such beautiful and inspiring stories from our students, and many times the parents are crying because these kids go through so much,” said Dr. Sandra Kofford, senior director of Migrant Education for Region 6 at the Imperial County Office of Education.

Students from school districts with a high school migrant program were all considered for the award. The Imperial County or Region 6 has participants come from Brawley, Calexico, El Centro, Holtville, Calipatria, and Imperial. Yara will be one of 20 representatives from the California migrant programs.

There will also be a Migrant Parent of the Year and an Alumni of the Year to represent the Imperial County. All three, student, parent, and alumni, will speak at the bi-annual Migrant Parent Conference in March on their experiences with the regional migrant program and about their personal stories as migrants.

Incidentally, this year’s Migrant Parent of the Year, Zobeida Velazquez, was also chosen out of Calexico.

Yara has pushed herself to go for higher education, a pursuit that will make her a first-generation college student for her family. She says the Calexico Unified Migrant Program, a program she has been a part of since fourth grade, has helped give her the boost she needs to reach these goals.

Being a migrant has been stressful at times, Yara said, and it was not always the best life for the family. However, she said he wanted to support her mother and help the family, so she would go along when it was time to move on with the crops.

Yara said sometimes she and her siblings were not able to stay in the same house as their mother, or at the times are not able to see their mom for days due to work. She admits this kind of life has made her more adaptive to situations and, as a result, she feel she feels she can take on any situation she is thrown into.

The 2020-2021 school year stands out in particular for Yara because of how difficult it was, with some days like the day in Coachella she described to the committee. Last year in Coachella, the family was living in a two-bedroom house, with Yara waking up the younger children up, connecting them online, and getting herself ready for online classes. This was all going on during the Advanced Placement testing season, final exams, and in the middle of a global pandemic, making the whole situation even more stressful, she said.

“It was stressful, and sometimes it got really discouraging to keep up with everything,” Yara said. “But then I always kept in mind why I was working in the first place, to not be in that situation again, and I kept going.”

Yara pushes herself academically. This year she is taking three AP classes on top of being part of the high school drumline and several clubs including Circle of Friends, Women Entitlement Club, and Students for ACT. She is also in the Imperial Valley College dual-enrollment program.

Despite the struggles, Yara said she is someone who sees a challenge as a way to keep pushing through.

“I didn’t want anything that was happening to discourage me,” she said.

The Migrant Student of the Year Award is just the culmination of all that hard work that came out of a tough school year last year.

“It really does feel like a recognition, that everything I’ve been working for is being recognized, it’s being noticed,” said Yara

Calexico Unified Migrant Program Coordinator Alejandra Limon said Calexico Unified works with its students to find the top ones to send to the main interview. This year they interviewed three students, and out of the three Yara was the top.

“We are very proud,” Limon said. “Calexico Unified School District is very proud of our migrant students, especially since this is the second year in a row that our students have been selected.”

Neither of her two older sisters went into higher education, so she will be the first in her family to pursue a college career, she said.

Yara has ambitions for her senior year as well. Yara is pushing to graduate in the top 20 of her class and walk in one of the top 20 gowns during the ceremony. She said she does not know what career she will go into, but knows there will be science involved. She plans to stay in California but is unsure if she will stay in Calexico or the Imperial Valley.