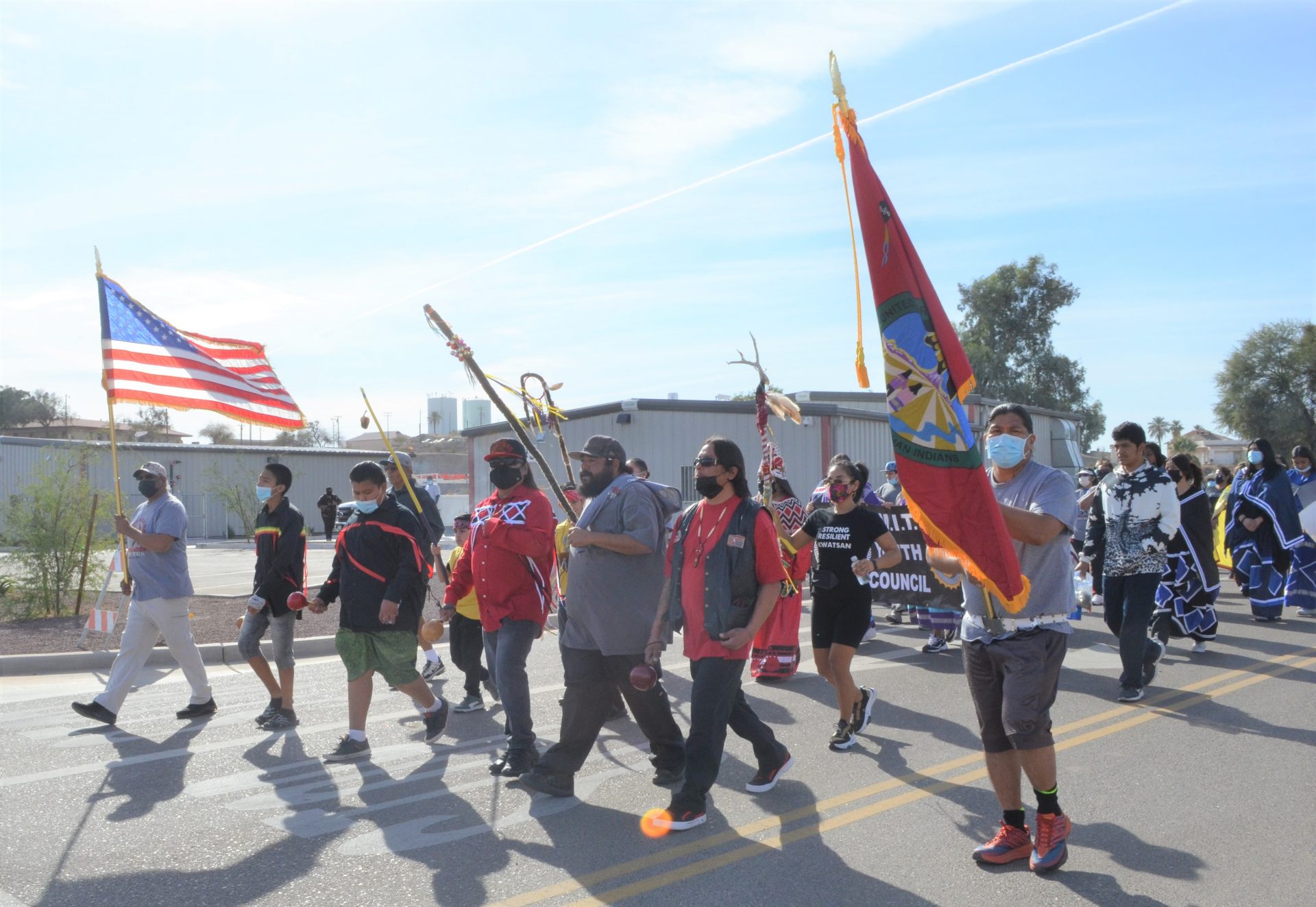 Members of the Fort Yuma Quechan Tribe along with members of the tri-state Fort Mojave Indian Tribe, Gila River (Ariz.) Indian Community, Cocopah Indian Tribe, as well as local community members and environmental activists took part in a “spirit walk” on tribal land in Winterhaven on Saturday, Nov. 20 to stand in opposition to a proposed mine at Indian Pass by Imperial Gold. | JULIO MORALES PHOTO
In Featured StoriesRegional News

WINTERHAVEN — More than 20 years after the Fort Yuma Quechan Tribe successfully halted a gold-mining proposal in the Indian Pass area, it is mobilizing against another proposed project on the land the tribe considers sacred.

The area, located on federal land in the southern part of the Chocolate Mountains and north of the tribe’s reservation, contains multiple cultural artifacts, including a trail that connects to the tribe’s mythic birthplace, Spirit Mountain, in Nevada.

Much like he did decades ago, Quechan Tribe member Preston Arrow-weed finds himself front and center in the current effort to prevent the new mining proposal by Imperial Gold from becoming operational.

And while the 81-year-old El Centro resident did not physically take part in a “spirit walk” the Quechan hosted in opposition to the mining project on Saturday, Nov. 20 in Winterhaven, Arrow-weed was at the walk’s end to provide the participants with some advice.

The highly respected elder, culture bearer, actor and playwright urged those gathered at the tribe’s community center to dispense with diplomacy in times when their very survival was at stake.

“When you see the danger coming, don’t be diplomatic,” Arrow-weed said. “Stop them, say something, do something. The best way to do that for young people coming up is to learn your language, learn your songs, learn your story.”

Preserving The “Trail of Dreams”

For millennia, the Indian Pass area in eastern Imperial County has held religious and historical significance for the Quechan Tribe. The area contains sleeping circles, geoglyphs and pottery shards left behind by the tribe’s ancestors, to name some artifacts.

The area is also known as the “Trail of Dreams,” whose trails allow tribe members to navigate the spirit world in their dreams.

Speaking to the crowd after the walk, Quechan Tribal Council President Jordan Joaquin said he was among the tribal members who had met with Imperial Gold representatives before the tribe decided to end further talks in late 2020.

He had also served on the council when Glamis Gold Ltd. had proposed a gold mine at Indian Pass more than 20 years ago.

“We won a victory decades ago but they’re back again,” Joaquin told those gathered. “We will always say ‘No’ to the desecration to our sacred lands.”

As with the tribe’s opposition to the previous mining proposal, its current struggle has attracted a supportive coalition.

Among the 100 or so individuals present for the spirit walk were members of the tri-state Fort Mojave Indian Tribe, Gila River (Ariz.) Indian Community, Cocopah Indian Tribe, as well as local community members and environmental activists.

During his remarks, Quechan Tribe member Zion White told attendees that currently there are no specific cultural sites at Indian Pass that have been formally recorded for protection under federal and state historical site preservation laws.

“As indigenous people it’s really hard to do that because the areas that we traveled and the history that it’s connected to is so vast and far and wide that we can’t put it into a single, certain location,” he said. “We definitely have to think more critically about how to do those things.”

Just about every individual who spoke during the rally acknowledged that the success of their efforts depended largely on young tribal members’ involvement.

Lycia Maddocks, a Quechan member who resides in Washington, D.C., and is employed as the political director for the indigenous-led NDN Collective, said she recently attended the United Nations Climate Change Conference in Scotland as part of a global delegation of indigenous people.

There, she witnessed young people stand up to the billionaire corporations and worldwide government officials that Maddocks said continue to think they can take from indigenous people’s land without their consent.

“The youth today have the most powerful voice,” Maddocks said. “You have the power and I’m asking you to please use it.”

She also called on the Quechan Tribal Council to formally draft and approve a resolution opposing the Imperial Gold mining proposal.

The last to speak at the rally was Wendsler Nosie Sr., a San Carlos (Ariz.) Apache Tribe member who had visited Indian Pass on Oct. 15 as an act of solidarity with the Quechan. He met with Arrow-weed and other tribal members.

The San Carlos Apaches are fighting against a proposed copper mine at the Oak Flat area of the Tonto National Forest, land they consider sacred. Nosie went before the U.S. Court of Appeals for the Ninth Circuit in San Francisco on Oct. 22 for oral arguments intended to prevent the United States from transferring the land to Resolution Copper, a multinational mining firm.

The court hearing left Nosie deeply concerned, he said, after hearing a U.S. attorney argue that “it does not matter” if the Oak Flat land transfer displaced indigenous peoples from their sacred land.

“This should become a No. 1 issue to hold the United States responsible for what they just said,” Nosie told those gathered. “We have to go to the Supreme Court and put the United States on call for all the negligence they have done. Not only to us but more importantly to Mother Earth.”

A Different Kind of Gold Mine

Currently, Imperial Gold is in the process of seeking an operating permit from the U.S. Bureau of Land Management, a process that is expected to take up to four years or more and will allow the public an opportunity to provide input, Imperial Gold Chief Operating Officer Marc Leduc said.

A self-described “gold nerd” with decades of executive-level experience in the mining industry in the United States and elsewhere, Leduc is well aware of the history and controversy of the previous mining proposal at Indian Pass.

Though Imperial Gold plans to use the same open-pit, cyanide heap leaching method that Glamis Gold had previously proposed, its project would minimize physical alterations to the landscape, Leduc said.

Such reclamation efforts are required by a 2003 state law that was largely prompted by the Quechan Tribe’s opposition to the previous mining proposal. The law mandates that areas disturbed by hard-rock mining are backfilled with material to within 25 feet above or below the original ground level.

“The whole reason for the reclamation standard was to satisfy the Quechan complaint,” Leduc said during a tour of the proposed project site on Nov. 16. “What we want to do is return (the landscape) back to what it was.”

The company has its sights set on a mineral deposit that is projected to yield about 2.2 million of ounces of gold worth an estimated $4 billion.

When Glamis Gold had proposed its mine at Indian Pass in the late 1990s, gold was selling for about $300 per Troy ounce, Leduc said.

“Because gold is now $1,850 (per Troy ounce), we can pay for the higher reclamation standard,” he said.

The company, a subsidiary of Canada-based KORE Mining, is also proposing a novel idea to both satisfy the state reclamation standard and help mitigate the public health risk that is posed by the drying Salton Sea.

The proposal, dubbed Project ACES (A Clean Environment for the Salton Sea), would take about 83 million tons of clean earthen materials dug from the proposed gold mine to create a one-foot-thick layer of material to cover the exposed Salton Sea playa, or lakebed, to help prevent toxic particulate matter from getting airborne.

“This is the perfect material for whatever project they want to do over at the Salton Sea to mitigate air problems,” Leduc said.

Imperial Gold’s mining proposal is expected to be a financial boon for the county as well, by generating some $5.9 million in local taxes, on top of $162 million in federal taxes, and $74 million in state taxes.

The project’s construction is projected to create more than 500 jobs, and more than 220 direct jobs with an annual payroll of more than $23 million when completed, according to information provided by Imperial Gold.

The company is also keen on highlighting local mining history as much as its potential future.

Though less expansive as the Quechan’s historic ties to Indian Pass, the surrounding region looms large in the nearly 300-year history of gold mining in the county.

Imperial Gold’s logo prominently features a gold-colored mountain whose flank contains the silhouette of two young boys, a reference to the nearby Cargo Muchacho Mountains.

Legend has it that the mountains were named in the late 1700s after two young boys who had returned to the Spanish colonists’ mining camp with their shirts filled with gold ore, earning them the title of muchachos cargados, or “loaded boys,” said Frank Salazar, Imperial Gold director of government and community engagement.

“What we decided to embody when we started Imperial Gold was to bring out rich mining history of gold in Imperial Valley,” Salazar said during the Nov. 16 visit to the proposed project’s site.

The company has applied for permits from BLM that, if approved, would allow it to establish 58 exploratory drill sites in two separate areas located between the Mesquite Gold mine and Imperial Gold’s main project site, Salazar said.

The exploratory drilling program is considered part of the overall project’s first phase. If exploratory studies show that a gold mine can be established without having undue degradation to the cultural and biological resources of the area, then Imperial Gold would proceed with the project’s second phase.

“Prior to making any land disturbance such as developing a drill pad there would be a trained archaeologist and cultural resource monitors provided for the local tribes to ensure that the areas of disturbance do not contain any cultural artifacts or human remains,” Salazar stated in an email on Nov. 16.

To date, the company has hosted two in-person and two virtual meetings with Quechan Tribe members, the last of which occurred in December, when representatives of the tribe reiterated their opposition and decided to end the dialogue.

During its talks, Imperial Gold had indicated that it would be willing to hire Quechan members during the project’s exploration phase and explained how the tribe could stand to benefit financially from Project ACES were the Quechan able to establish a company to transport the earthen material from the mine site to the Salton Sea.

“My wish is that we could have a good cooperative relationship with them,” COO Leduc said. “The only way to do that is through dialogue.”

It remains to be seen when that dialogue will resume between the tribe and Imperial Gold, but clearly there is a long road ahead in the process. Imperial Gold’s permit application with the federal government can take up to four years.

It appears the Quechan are ready to stand firm in their opposition for now.

“We’re not fighting to take the land back. We’re trying to stop it from being destroyed,” said tribal elder Arrow-weed on Oct. 15, when he was joined at Indian Pass with the San Carlos Apache’s Nosie.

“I know that we’re stopping progress, but progress kills, too. Progress is dangerous if you don’t know how to do it,” Arrow-weed said. “They are not thinking about the ecology … They think that if one little lizard dies it won’t make no difference.” 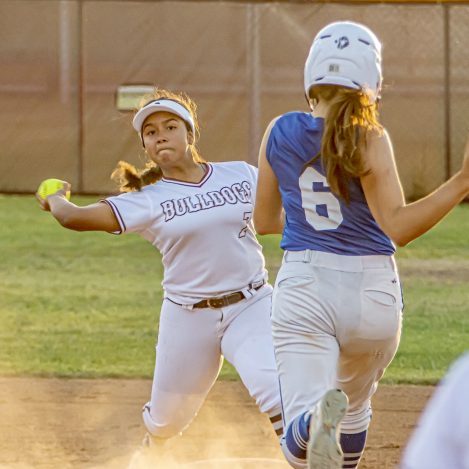