CALEXICO — The following reports were collected from the Calexico Police Department call logs from Nov. 15 through Nov. 21.

2:22 p.m.: A security guard at Western Union on Imperial Avenue called police after witnessing one man pushing a cart with a 60-inch TV on top and another man overdosing on drugs near the business. The security guard called 911 to get medical assistance for the overdosing subject and the man who had been pushing the cart fled the scene. The subject who had appeared to be overdosing refused medical aid and also left the area. Police took possession of the TV and labeled it found property.

10:38 p.m.: A police officer patrolling the downtown area detained a male subject due to the man acting suspiciously. The man was later found to be on parole and an active member of the prison gang Green Lights. A search of his vehicle revealed a used methamphetamine pipe, a crystalline substance suspected to be methamphetamine and several rounds of ammunition. He was cited and released at the Calexico Police Department due to COVID-19 restrictions at Imperial County Jail.

11 a.m.: An unknown suspect shattered the window of a black Chevrolet Suburban while its owner was inside the Wells Fargo bank on East Third Street. The thief made off with two Samsung phones worth an estimated $2,500.

6:16 p.m.: Police responded to the 700 block of Harold Avenue for reports of a man who was refusing to leave an Alcoholics Anonymous meeting. Police made contact with the man, who had locked himself inside a restroom and was refusing to leave. The man exited the restroom and while he was being escorted from the building, he allegedly attempted to assault another man and threatened to beat him. The man also began to resist officers and had to be handcuffed. He was charged with resisting an executive officer and taken to Imperial County jail.

4 p.m.: A locked silver Nissan Xterra was reported stolen from the 200 block of Fifth Street.

12:47 a.m.: Police responded to reports of a fire at the Fillco gas station on Imperial Avenue. Arriving officers noticed a male subject wearing all black and carrying a burning piece of cardboard while attempting to flee from the scene. The man, later identified as Erick Martinez, was detained and told police that he started the fire by accident when he threw a cigarette on the ground and had been attempting to extinguish the flames. Martinez was found to be in possession of a lighter, but no smoking materials. Police found four separate small fires near the gas station and fire department personnel determined that the fires had been set intentionally. Martinez was arrested on suspicion of arson and taken to Imperial County jail.

2 a.m.: An unknown suspect shattered the window of a locked Toyota Corolla on the 300 block of East First Street and stole documents from the vehicle’s glove compartment including a birth certificate and tax returns. 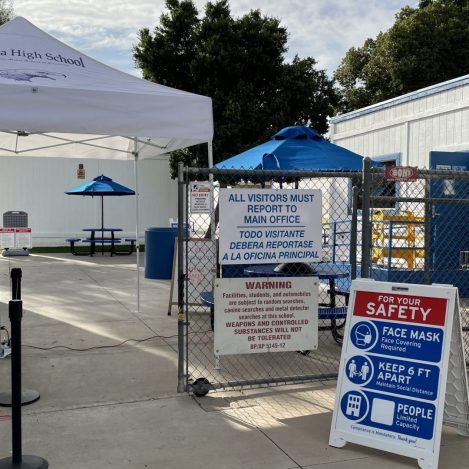