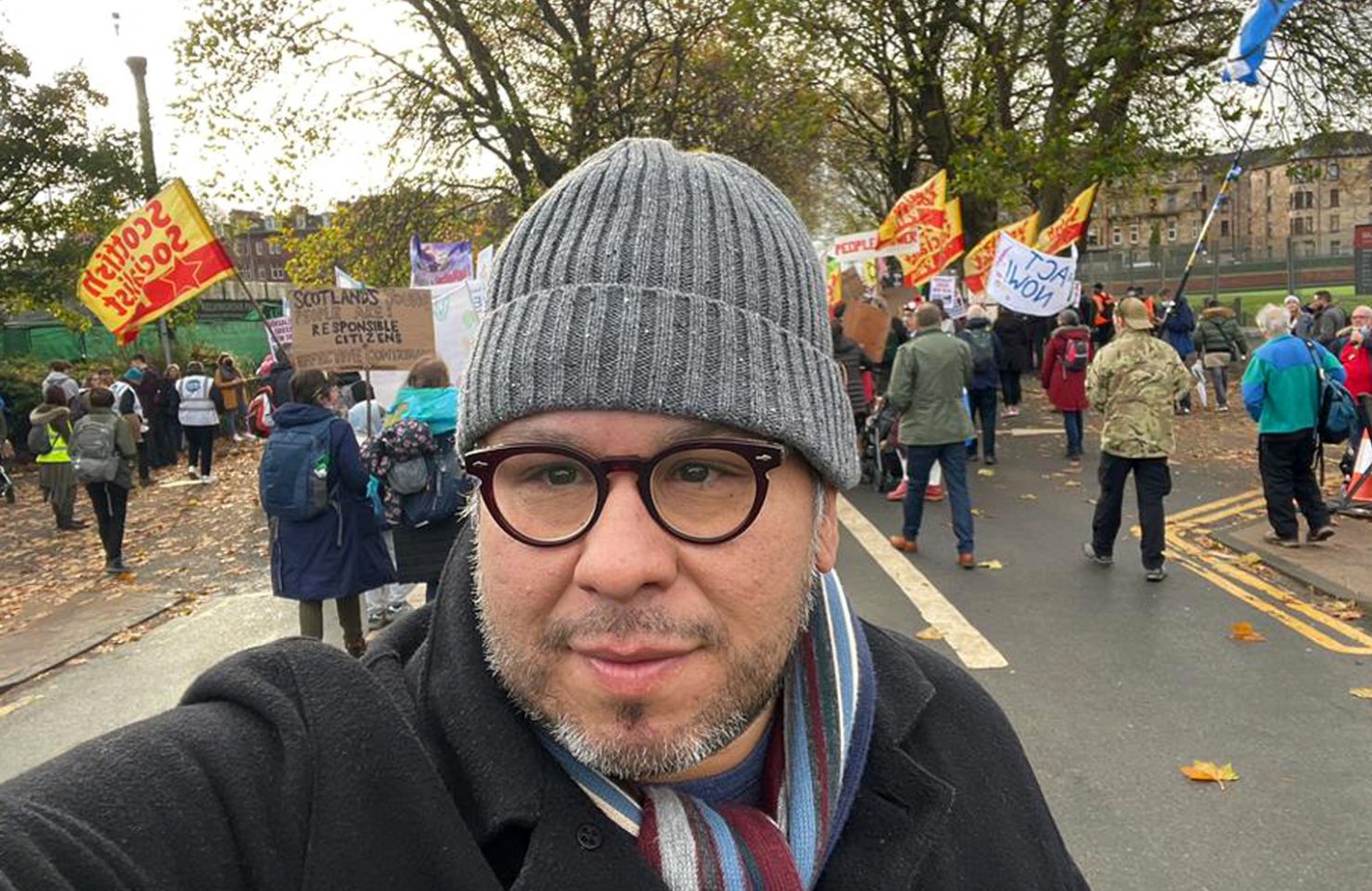 California District 56 Assembly member Eduardo Garcia grabs a selfie during a street demonstration taking place outside the COP26 conference which he attended as part of the California delegation.
Home
California
In CaliforniaRegional News

The 2021 United Nations Climate Change Conference, also known as COP26, resulted in a “final communique,” signed by representatives of the 197 countries, on Saturday, Nov. 13. In the agreement, the nations pledged “to accelerate the fight against the climate crisis and to commit to tougher climate pledges,” according to CNBC.

While some hailed the agreement reached in Glasgow, Scotland, as containing important milestones, many others said it would not do nearly enough.

California sent a large delegation of officials to attend a portion of the meetings and events. District 56 Assemblymember Eduardo Garcia, who represents the eastern Coachella Valley and Imperial County, was part of that delegation.

A veteran of two previous COP conferences, Garcia has been influential in the passage of at least seven state bills addressing climate-change mitigation and the restoration of California’s natural resources. He recently spoke to the Independent about his experience at the conference, including how it differed from previous conferences.

“One difference, I’d say, is that there was some enthusiasm that the United States government would be present in the conversation,” Garcia said. “The last four years have been very unique in the sense that there has been an absence of commitment from our federal government to work hand in glove with other nations to address global warming and climate change.”

Garcia also said it was different to have “sub-nationals”—states in the U.S. and other countries—playing a larger role.

“California—which is the fifth-largest economy in the world, and home to innovation and technologies that have been attributed with helping to address the issues of renewable energy goals and climate improvements—has a story to tell,” Garcia said. “There was a lot of enthusiasm in our discussions with delegations from Germany, from India and from Scotland. We met with a number of different (non-governmental organizations). … I think the real takeaway was that there is a need for greater investments in underdeveloped nations, which is the same argument that we make in California for our economically disadvantaged communities that are disproportionately impacted by the climate changing.

“Here we are in November, and it’s over 90-some degrees (in the Coachella Valley). So, clearly, there is something happening that we must plan for in order to ensure that our existence will remain in place as we know it.”

Garcia said the challenges that climate change will create in the Coachella Valley were foremost on his mind—as were the opportunities that could be created here.

“For us, there was a lot of discussion regarding the issue of clean transportation,” he said. “That presented the (context in which) to talk about our district, and the opportunities to recover lithium for purposes of battery storage and electric vehicle battery production.”

He said the issue of heat, and the goal to keep any average global increase below 2 degrees Celsius over the next decade, was a frequent discussion topic. Garcia said that in January, he plans to start working on legislation to create a heat-event-ranking system, similar to the system used to evaluate the relative strength of hurricanes and the potentially dangerous impacts. The system would also gather data.

Here we are in November, and it’s over 90-some degrees (in the Coachella Valley). So, clearly, there is something happening that we must plan for in order to ensure that our existence will remain in place as we know it.”

“Data leads to other actions, right?” Garcia said. “Data leads to centralized efforts to mitigate and minimize the (negative) outcomes. It leads to the isolation of resources with the intentional purpose of deploying them to these areas that have been highly ranked as a really hot place in California, where significant human health damage, and also economic damage, (could occur).”

While Garcia could point to no other immediate legislative actions in California that were spawned by the COP26 experience, he mentioned the benefits yet to be derived from previous legislation and environmental objectives.

“The work that we are already involved in, like the lithium recovery effort, is part of a strategy that would help meet California’s (goals for) deployment of 5 million electric vehicles on the road, and 250,000 infrastructure charging stations,” Garcia said. “We’ll need power to charge these vehicles, and that could be deployed from renewable energy like geothermal here in Southern California. … We are ambitiously planning to achieve 100% of our renewable energy goals. That’s going to require different technologies even beyond solar, wind and what we know today. … At COP26, we learned about offshore wind (technology) that’s taking place in Europe and how that’s become a major focal point of some nations in their efforts to go green. Also, we got to hear about the issue of carbon neutrality and carbon-capture technologies. So, it’s going to require a diverse portfolio of renewable energy. Now, can California do more? Most definitely. From an economic standpoint, and from a permitting and processing standpoint, we’ll be focusing on these issues, particularly pertaining to the Salton Sea lithium-recovery efforts.”

COP26 was the subject of massive media coverage—and large demonstrations in Glasgow. Garcia said those calls for action from the streets had an obvious impact on the conference.

Students with Disabilities Across California Stuck in Limbo

“I was involved in one (demonstration) at the University of Glasgow,” Garcia said. “I walked right into a little protest and was talking to students from other parts of the world who just feel—and I don’t disagree—that there’s been a lack of investment and action by the entire world. … You can always look at it through the lens of, ‘It’s not enough,’ and since some of the main countries who failed to have a presence in (this year’s) conversation are serious polluting nations, there’s a high level of frustration among young people and families who care about this issue.”

It’s not a coincidence that the two most-pressing global issues of today—climate-change mitigation and COVID-19—are a source of major concern in the more disadvantaged communities around the world.

“The reason why certain populations were more susceptible to getting COVID-19 was because of underlying health conditions that are either hereditary, or result from environmental damage,” Garcia said. “Whether it’s about breathing emissions in the air because they live by the freeway, or drinking contaminated water, it’s the same population that is coming together to speak up and ask for more.”

Garcia said Southern Californians can do their part to help mitigate the effects of climate change.

“Whether it be knowingly or unknowingly, everyone is doing their (part) to reuse and recycle, which is great,” Garcia said. “But for us, it (needs to be) about how we build our communities in terms of the type of transportation systems we can develop. Some 70% of the emissions we are trying to reduce come from our transportation system. There are technologies and cleaner fuels that are being developed right here in our community. Imperial Western Products (located in Coachella) recovers fatty oils and other disposable foods that are turned into diesel fuel. So there are efforts under way.”

“Yes, driving an electric vehicle is contributing to helping the environment, but our goal in the Legislature is to make sure that we can make that an opportunity for everyone, because currently, that isn’t the case. … We know, too, that there is still a lot of education (to be done) around the issue of the environment. I’ll bring it back to this issue of extreme heat. We’ve got communities out here that have had an interruption of power during some of the hottest days of the summer. So, how we plan properly for those circumstances is really what this (heat event) legislation is about. How do we deploy resources to these high-ranking geographically hot areas of our state? We have alert systems for air-quality issues, for hurricanes and for earthquakes, so we want to treat this issue of extreme heat through the lens of a public-health crisis, and not just an emergency reported as another hot day in the Coachella Valley and Imperial Valley.”

The Local Climate Crisis: Assemblymember Eduardo Garcia Talks About His Takeaways From the U.N. Climate Change Conference by Kevin Fitzgerald is a story from Coachella Valley Independent, the Coachella Valley’s alternative news source. 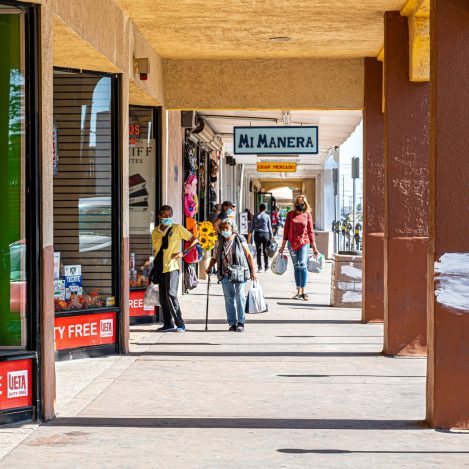