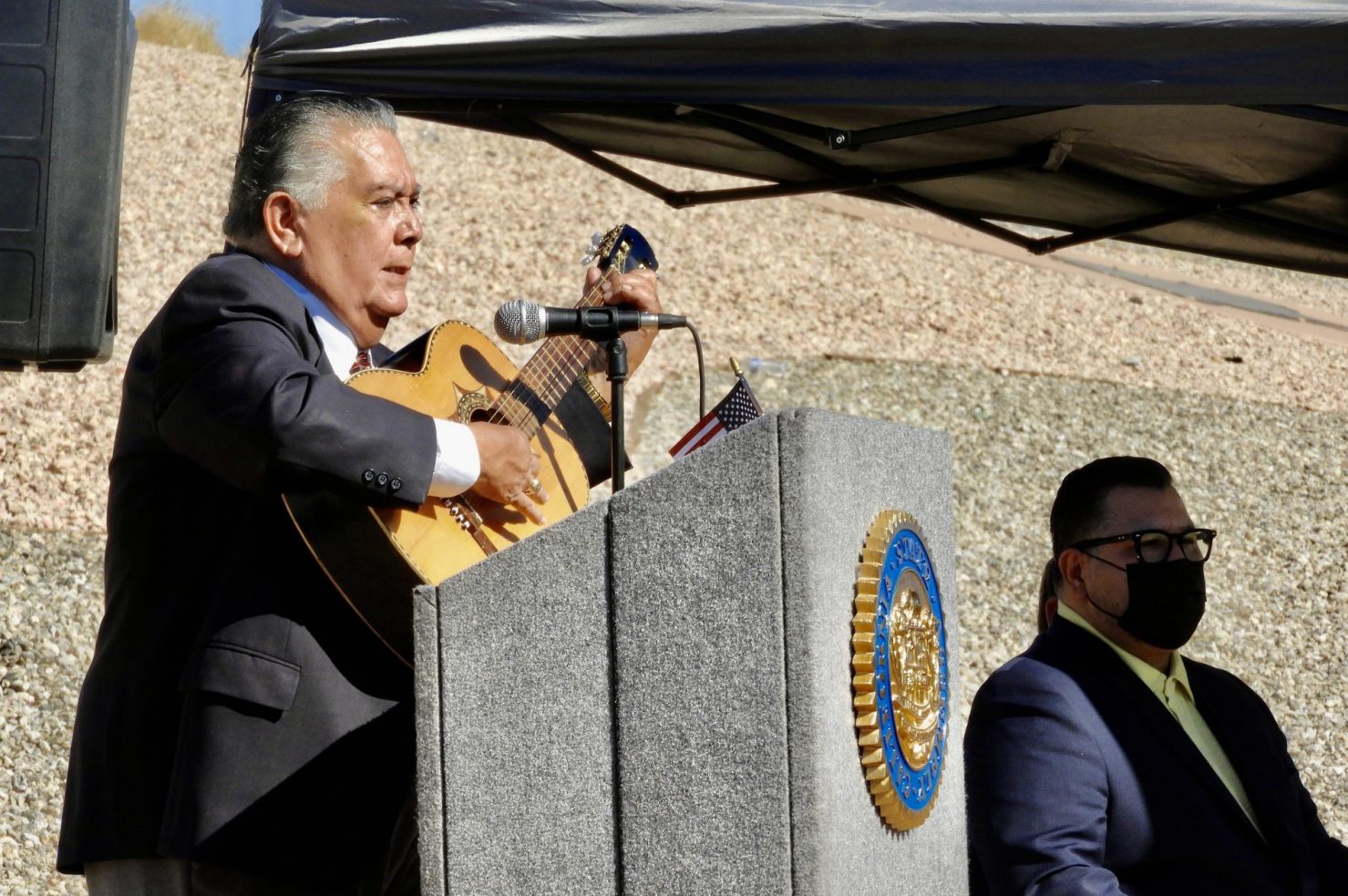 EL CENTRO — In case Imperial County residents forget there is an ongoing pandemic, numerous members of the public, including state and federal officials, at several events late last week were exposed to COVID-19 thanks to everyone’s favorite singing supervisor, Raymond Castillo.

District 5 Supervisor Castillo announced his status off-handedly during the Imperial County Board of Supervisors meeting on Tuesday, Nov. 16, where he was teleconferencing from his Holtville home while in quarantine after testing positive for novel coronavirus.

“On a side note, Friday (Nov. 12), I wasn’t feeling well. I went to the doctor — well, the hospital — and I was tested for it and found out I had COVID-19. And that’s why I’m not here this morning (Tuesday) because I’ll be in quarantine for the next couple of weeks,” Castillo said during the county board meeting.

“On the positive side, I got given a medication called Regeneron, which is very effective. I’m double vaccinated, and I still got COVID. But the reality is that my symptoms — I was symptomatic — but I didn’t really realize that I had COVID,” he said. “I thought it was just a case of the flu coming down. But with that Regeneron, I feel great right now.

“There’s no effects of any kind, so thank God for medication. I’ll see you guys, the public, in person there probably the first week of December,” Castillo added.

That’s right, Castillo did not feel well on Friday, yet showed up to the well-attended Alamo River Bridge renaming and sign unveiling in Holtville for the late Marine Cpl. Erik Silva, where he played guitar and sang into the microphone, was in close contact with Assembly member Eduardo Garcia, D-Coachella, several county and city officials, and Naval Air Facility El Centro commanding officer, Capt. William Perkins, and conducted close interviews with members of the media.

Nearly 40 travel nurses and respiratory therapists, provided by the state Emergency Medical Services Authority, arrived in the Valley on Friday, according to El Centro Regional’s Dr. Adolphe Edward, in anticipation of rising COVID infection case rates and hospitalizations in some 29 states.

Castillo said during Tuesday’s meeting that his physician informed him he was contagious as far back as Wednesday, Nov. 10, where that morning he spoke at a ceremony for Gold Star families at the empaneling of the AV Wall: The Mobile Vietnam Memorial Wall at Bucklin Park in El Centro, and also attended the county Public Administrator’s Office’s indigent burial ceremony at Terrace Park Cemetery in Holtville.

Castillo did ask that the county’s public information officer put out a statement in case members of the public that were exposed need to be tested.

On Wednesday morning, Nov. 17, the county put out a statement about Castillo’s illness.

Case rates in Imperial County are holding or going through a period of incremental decline, but hospitalizations and especially ICU cases have been on the rise in the Valley for more than a week, Edward and Imperial County Public Health Director Janette Angulo said in separate interviews on Friday.

“It is a downward trend in cases. However, what we are seeing is an upward trend when it comes to hospitalizations. … our 14-day average — this is an average — is at 36.8 COVID-positive hospitalized patients,” Angulo said. “That’s only COVID-positive; there’s much more going on at the hospitals.”

Angulo was referencing the increase that comes along with the late fall and early winter, such as flu and injuries from the off-roading season, among other causes.

Edward said there were 40 COVID-positive patients between both hospitals and all of the ICU patients in ECRMC on Friday morning were unvaccinated COVID patients.

“Eleven patients today in the ICU, all 11 of them are COVID-positive, none of them have been vaccinated, and all of them are on vents,” Edward said on Friday afternoon.

For the first time in months, the Imperial County Board of Supervisors meeting was without an update on COVID conditions by Public Health Department officials. But on Tuesday morning, the twice-weekly update showed new COVID cases were at 23.4 per 100,000 residents and a seven-day positivity average of 9.4 percent for the period of Nov. 1 through Nov. 7.

“We just had Halloween and we are seeing again a lot more activity in our community,” she added.

Following Cattle Call Week activities, where a number of huge public events, from the Chili Cook-off on Nov. 6 to a packed Plaza and Main Street for Mariachi Night on Nov. 10 and the parade and three rodeo performances the weekend of Nov. 13-14, Edward believes that by the end of this week, case rates will start creeping up again.

That data, however, would not be reflected until an update sometime next week based on the seven-day lag of case rates and positivity data, according to Angulo.

Hospitalization is more of a real-time marker, Angulo said, and Edward added that the state Emergency Medical Services Authority believe that Imperial County needs to be prepared for a winter surge. State officials requested that ECRMC and Pioneers expand “surge” bed capacity and assigned the personnel to accommodate.

Already, the county has been seeing an increase in transfers outside Imperial County, something that does come and go but hasn’t been seen in big numbers for quite some time.

“In the past week and a half or so we’ve had over 40 transfers, and this includes COVID and non-COVID-related,” Angulo said on Nov. 12.

Seven days after any significant event will bring with it the infections, Edward said, adding that Imperial County will likely see increased cases following the Nov. 8 “reopening” of the border to nonessential fully vaccinated travel (data starting Nov. 15) and other large events.

One that caught the eyes of local officials was Mariachi Night. While some could be seen masking at the event, the crowds were in cramped quarters as event organizers said it was perhaps the largest Mariachi Night, even pre-pandemic.

“We’ll be seeing the mariachi festival team — I say team, sorry — we’ll see them arrive at our hospital seven days from … when was it? Call me on Thursday morning (Nov. 18), and yep, we’ll probably be up by 12 (patients),” Edward said on Friday.

“We’re gonna be going backwards. I mean, I hate to be saying this, but can you imagine if the President now is getting reports that every state is back into the same stuff we were doing a year ago?” he said, referencing reports that cold-weather states where infections were not expected to be rising, such as Minnesota and Illinois, are on an upward trajectory.

There are some breakthrough cases, like Angulo mentioned, but while overall infections in communities with strong vaccination rates are down, it’s the unvaccinated who are being hospitalized. And even that is a mixed measuring stick, Edward said, due to the ever-mutating nature of the virus.

Vaccination is effective, Edward said, but it’s advisable to vaccinate in tandem with other measures like masking and avoiding large gatherings.

Imperial County was nearing 85 percent fully vaccinated residents prior to the recent inclusion of children ages 5 to 11 as part of those eligible to be inoculated, Public Health’s Angulo said.

Imperial County has a little more than 21,400 individuals between ages 5 and 11, which knocked about 10 percentage points off the fully vaccinated numbers in the Valley. As of Nov. 12, the number of fully vaccinated was 73.5 percent, she said.

There has been much controversy brewing locally over reports that a child in that age range fell ill after receiving the vaccine and had to be transferred to Rady Children’s Hospital’s ICU last week. Edward took to Facebook Live to address it and spoke in more detail on the issue on Friday.

Facebook prayer groups referenced a 7-year-old girl named Amanda who had been vaccinated and ended up on a ventilator. Edward acknowleged that it did occur but said there much more going on.

“I think a lot of people were very quickly pushing it as a story not to vaccinate their children. I’m sorry, I can’t share with you a lot of the case, but that are underlying issues in the conversation regarding the clinical case that would lend itself to a closer review,” he said. “I would ask the public to not rush to conclusions and based on what I’m seeing again, with an uptick of cases, please vaccinate your children. Get them vaccinated.”

Children are especially susceptible and that was seen in a big way in Brawley, where two entire classes at Myron D. Witter Elementary School were closed for 10 days.

Brawley Elementary School District officials seemed to downplay this during a school board meeting last week.

“I am not aware of any individual classroom or school closures,” Angulo said.

Two classrooms closed at Witter Elementary School, and students and the two teachers who tested positive were sent home for 10 days of home study.

BESD policy dictates students are to stay home when testing positive. If more than three students from a single source test positive, then the classroom will be closed for quarantine. BESD also follows contact tracing to notify parents and employees who might have been in contact with the person.

All the students who were sent home were already back in class as of Friday, Nov. 12, per the district requirements of returning to campus after 10 days of quarantine.

BESD Board Trustees Gil Rebollar and Armando Padilla praised Principal Ivan Vildosola at the board meeting on Nov. 9 for his handling of the situation, with Padilla saying Vildosola was “so cool and collected.”

Katherine Ramos and Marcie Landeros contributed information to this story. Marcie Landeros was exposed to Castillo, including conducting close interviews following two of the three appearances referenced. She was tested as a result.

(This story was updated at 9:30 a.m. Wednesday morning, Nov. 17, with acknowledgement of the county’s press release.)