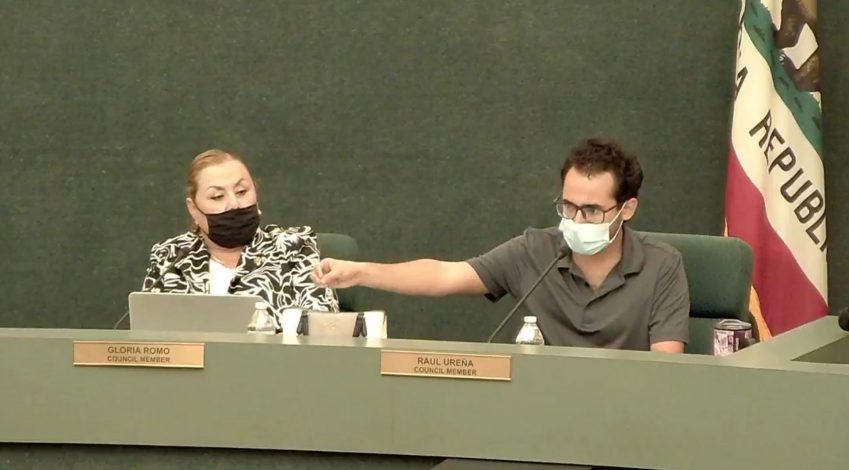 CALEXICO — One after another, Calexico city employees, from veteran management to those early in their careers, hammered home that the $7,000 in hazard pay offered to them was the least they were owed for working through the pandemic.

Calexico Firefighter Josh Paddock, just four years with the city, said 80 percent of the department contracted COVID and that he personally worked 200 days in 24-hour shifts last year, as did many of his fellow fire service members, Calexico’s police officers and front-line city employees, he said.

“City employees came in when they couldn’t (because) their kids have to stay at home … they had to provide for sitters,” Paddock cited as an example of how a diverse range of city staff was affected in numerous ways.

Calexico fire crew members in their encounters with the infected had been exposed to more than 1,100 COVID-positive patients throughout the course of the pandemic, both Paddock and fire Engineer Oscar Pesqueira told the Calexico City Council.

They and other city staff members were put in a defensive posture on the night of Nov. 3 when all of those who spoke found themselves having to justify a justified use of roughly 10.7 percent of Calexico’s share of American Rescue Plan Act funding.

Often-outspoken Calexico City Council member Raul Ureña clearly came to that night’s meeting ready to upend what was supposed to be a smooth approval of the one-time award. The discussion quickly de-escalated into city staff vs. Ureña, whether that was the council member’s intention or not.

Issuing the payment, which would amount to $1.02 million of the city’s anticipated $9.52 million in total ARPA funding to be used through 2026, was folded into the evening’s consent calendar, meaning one decision with no discussion would have approved the payment.

Yet Ureña was champing at the bit to get the item pulled from the consent agenda so it could be aired fully, and he had a written statement ready to voice his disapproval at awarding the funds. Ultimately, the issue passed 3-2, with Ureña’s silent voting partner, council member Gloria Romo, saying nothing as Ureña took on fire — from not just the firefighters but department heads and his own council members.

After the meeting that night, Ureña offered his intent and assessment.

“I am not happy about Hero Pay for most city employees but not for the people or temp workers that staff the city. Two ways to remedy this: Spend ARPA funds on affordable housing or on direct stimulus to essential workers. Unfortunately, with so many essential workers in Calexico, I can expect each essential worker to get max $50 to $100 each if we allocate an equal total amount as we did to the employees,” Ureña said outside the Nov. 3 meeting.

“I would highly prefer a lasting investment for that community that missed out on Hero Pay like affordable housing. I will be proposing this soon,” he added.

Even at the meeting, as Ureña attempted to make his point about why he was in opposition, restating the council’s prior resistance to Hero Pay for essential workers at businesses in excess of 200 employees or an eviction moratorium that never got off the ground with any local municipality, his point was drowned out in the contentious delivery.

Calexico Police Chief Gonzalo Gerardo, who at one point last year saw an entire shift’s worth of his officers, including himself, sidelined with COVID, came back at Ureña strong.

He talked of how some cities gave more in ARPA funding to first responders, or how some cities awarded funds based on job type or hours worked, but at the end of the day, he said the formula before the council was fair despite Ureña’s reaction.

“They want to be fair across the board with everybody; everybody gets the same amount, even though some people were more exposed than others; some people got sick, some people didn’t,” he said. “But you know what? As a city you show your appreciation to your employees that come in and work shorthanded. Day in, day out.

“We make those downtown events happen in four days,” Gerardo said, specifically taking a jab at Ureña’s excitement over the success of Feria Pa La Raza in the downtown more than a week ago.

“I will keep be doing a disservice to my staff if I don’t speak for them. They’re not here,” she said.

“Our staff had to work and show up, had to do services by themselves without the extra help. I only think that it’s just, that it’s doing justice to them to give something back,” Lobatos said. “I understand your point, Mr. Ureña … about the Hero Pay.”

Lobatos implied it. Gerardo touched on it. Pesquiera and Paddock made the point. This use of ARPA funding is in line with what it was intended for; not for farmworkers or longer-term items.

“I can appreciate the farmworkers; they do bring food to our table. But they don’t work directly for the city. We work for the city,” Pesquiera said.

One of the more impassioned pleas came from Lorena Minor-Montes, president of the Calexico Municipal Employees Association, who called in over Zoom to speak.

“I’m really appreciative of what the council has decided to do for the city employees as a whole. However, Mr. Ureña, this will be towards you. These members you’re talking about are part of my membership. I fight for them continuously, all the time, because they are part-time employees and have no benefits,” she said. “You know why? … these people are part-timers through a consultant agency because of you, the council. It’s the council’s fault, not anyone else.

“I’m very, very disappointed in your comments. Who are the people that took care of your carnival this last week? Who put it together? You say that they brought the city of over $1,000, but how much money did it cost in labor time for the members of my membership?” Minor-Montes asked.

“If we could give more, we would,” Garcia said answering to Ureña’s assertion that the money should be focused on more permanent methods to pay city workers.

“We would give each and every one of you more, and I think Rosie alluded to that, across the board, we will give you more, but I think that this is something that it’s on the table. Due diligence was done, this was not just pulled out of a hat,” Garcia added.

“Maybe it’s not what you know that you deserve. I understand that, but I think it’s something for all of you and I truly appreciate what you do,” Garcia said speaking to city workers from the dais.

Ureña asked that the vote be delayed and the issue tabled, but that was rejected 3-2. The motion was called to approve the payments as proposed; it passed, 3-2.

No one begrudged Ureña’s intent, which did appear to come from a genuine place of equity for all city staff. But it was the timing and the manner in which he did it that caught most off guard.

“I know why you are defensive about me being against this one-time money. But I will remind you that I’m the only one up here who’s talked about raising your salaries and benefits. I want you to have the permanent piece of the pie. And the only way that can happen is if we make the right investments with this money so we can come back and hire staff, move people from part- to full-time and get you the higher benefits and salaries permanently that you deserve,” Ureña said at one point.

“Give money to the essential employees directly. Have the city give money to the grocery workers that we denied, that fed us, that got sick; to the farmworkers that got more sick than police officers, who had the highest death rate than anyone sitting in this room, that kept us fed through this pandemic,” he added.