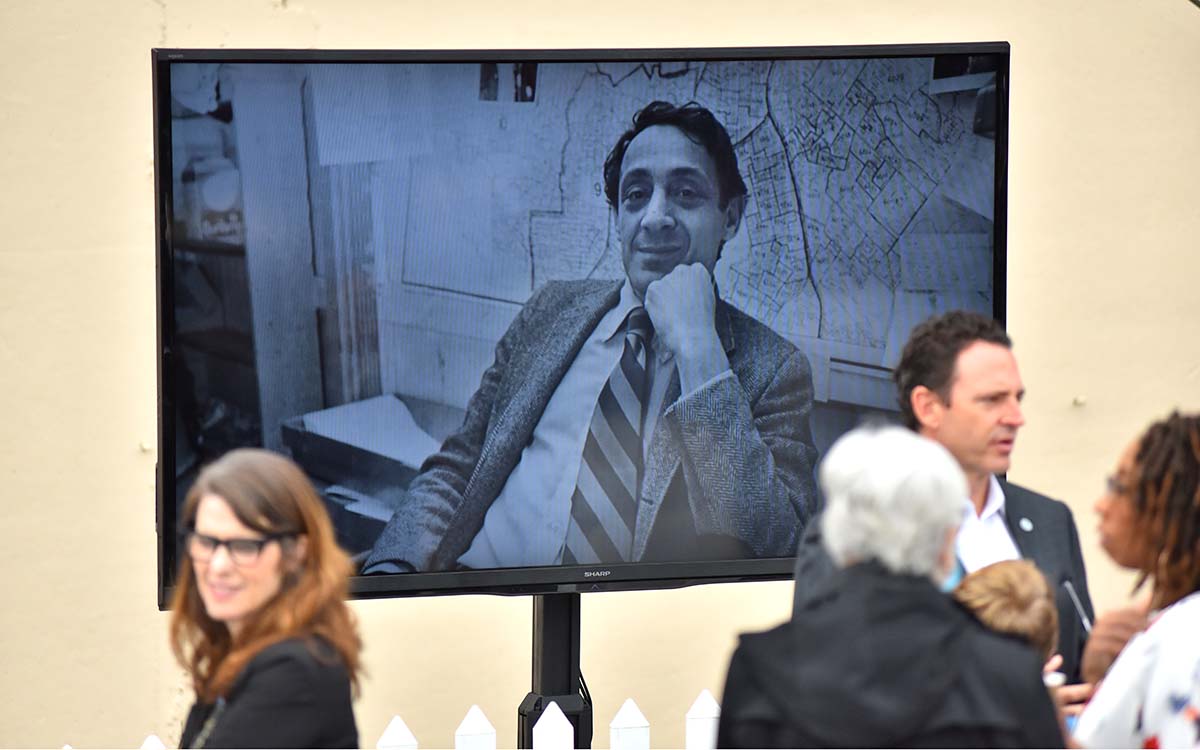 Photos of Harvey Milk were projected for attendees. Photo by Chris Stone
Home
California
In California

In August 2016, then-Secretary of the Navy Ray Mabus announced that a yet unbuilt Navy fuel-supply ship would be named for slain San Francisco Supervisor Harvey Milk, a gay rights icon.

About 7,700 miles away from that Treasure Island ceremony, a 15-year-old Kuwaiti named Khalil heard the news.

“In Kuwait, it’s still illegal to be LGBT,” Stuart Milk told an audience at General Dynamics NASSCO, including Mabus, 73.

But fearing that coming out as gay would prompt his family to conduct an “honor killing,” Khalil planned his own suicide — “so that his parents did not have to go through the trouble of killing him,” Milk said.

After hearing about the ship being named for Milk, though, Khalil wrote the Harvey Milk Foundation that Stuart co-founded and said: “I’m sitting here in the port in Kuwait, waiting for the … Harvey Milk to come. I have put aside my plan of suicide and I think I have a future.”

Voice cracking at times, Stuart Milk said his group is still in touch with Khalil.

“He is safe. He is hopeful,” said Milk, 17 when his uncle was killed. “The U.S. Navy ship Harvey Milk has already began to spread hope and the dream of my uncle around the world.”

Hundreds attended the ceremony under tight COVID protocols to hear Navy and NASSCO leaders tell the story of Harvey Milk — a life cut short in 1978 — and the ship celebrating that life.

Navy Secretary Carlos Del Toro spoke, and after the ceremony said: “I think it sends a message to all of our LGBT community and to all Americans that the Department of the Navy is a very welcoming community for all Americans who want to serve our country in uniform and civilians in the department as well too.”

He called Harvey Milk a brave soul and an example “for all of our sailors and Marines to be bold… have strong courage of convictions, always do the right thing.”

Todd Gloria, the first openly gay San Diego mayor, hailed Del Toro and others for noting that the christening was not just a show of tolerance but celebration.

“This is a day many of us could never have dreamed of happening,” Gloria said. “I have no doubt that there are sailors all around the globe who heard those comments, and they were so powerful, and they were made possible by Harvey Milk many decades after his assassination, continuing to bring people hope who need it.”

A transgender leader did the christening honors — live-streamed by NASSCO.

“May God bless this ship and all who sail on her,” said Paula Neira, Navy veteran and clinical program director of the Johns Hopkins Center for Transgender Health, as she broke a bottle of sparkling wine across the bow at 10 a.m.

The civilian-staffed USNS Harvey Milk is the second ship in the Navy’s John Lewis class of fleet replenishment oilers, which will serve to refuel Navy ships at sea — even several at once.

Del Toro said that when he travels the world meeting Navy personnel, he always tells them, “Be bold, be brave and take care of the people you lead. Fight for them, that’s what your uncle did,” speaking to Milk’s nephew.

“Uncle Harvey did not set out to have a ship, school or park named after him,” Stuart Milk said. “He did have a dream, however. Yes, Uncle Harvey was forced to resign because he was gay. Let’s teach his story, teach about our flaws so we don’t go backward.”

Milk presented books and Oscar-winning documentaries about Harvey Milk to the captain of the ship for its library.

“Harvey actually dreamed of today,” Stuart said. “His dream gave him courage. Harvey left this world seeing all of us fulfill our potential and making his dream a reality.”

Neira said that when the USNS Harvey Milk sails, it will send a strong message around the world.

“There’s a place for you,” she said. “These ships will inspire our sailors, our country to express our values of honor, courage and commitment.”

The John Lewis class of ships are each planned to be named after notable civil rights leaders and activists, including Robert F. Kennedy, Earl Warren and Sojourner Truth.

Milk served in the Navy during the Korean War as a diving officer, then became the first openly gay elected official in California when he was elected to the San Francisco Board of Supervisors in 1977.

“And that is so important,” he said. “It brought tears to my eyes. This is a great step, but we still have a long way to go.”

Stuart and the Milk family asked that the official bio say that Harvey was dishonorably discharged, but that didn’t happen. Murray-Ramirez also said it was “very disappointing,” despite weeks of effort, that christening organizers didn’t let certain gay veterans in.

Stuart Milk told the audience of officials including enough San Diego City Council members to form a quorum that it’s important to teach how America has evolved as a society and culture — “that me move forward.”

“But we have to teach our history to prevent ourselves from going backwards and repeating it,” he said.

The military’s former “Don’t-ask-don’t-tell” policy, when it was ended in 2011, sent the message that LGBT service members could serve with honesty and openly, Milk said.

“Secretary Mabus and the Obama White House had asked me about reversing Harvey’s dishonorable discharge, which thankfully you now can do,” he said. “[But] I explained that I thought it was important not to do that — to keep the memory of how we did not honor every one in this very honorable service.”

(This story by Ken and Chris Stone first appeared on Times of San Diego and is made available as part of the CalMatters Network.) 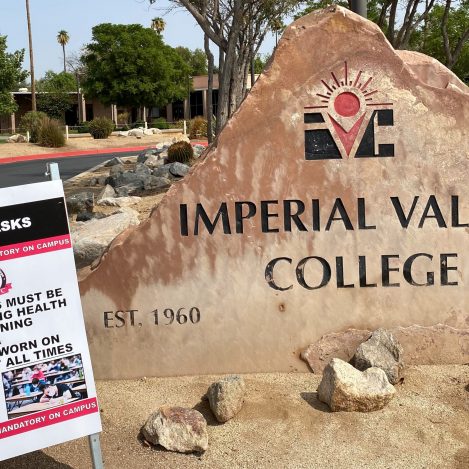