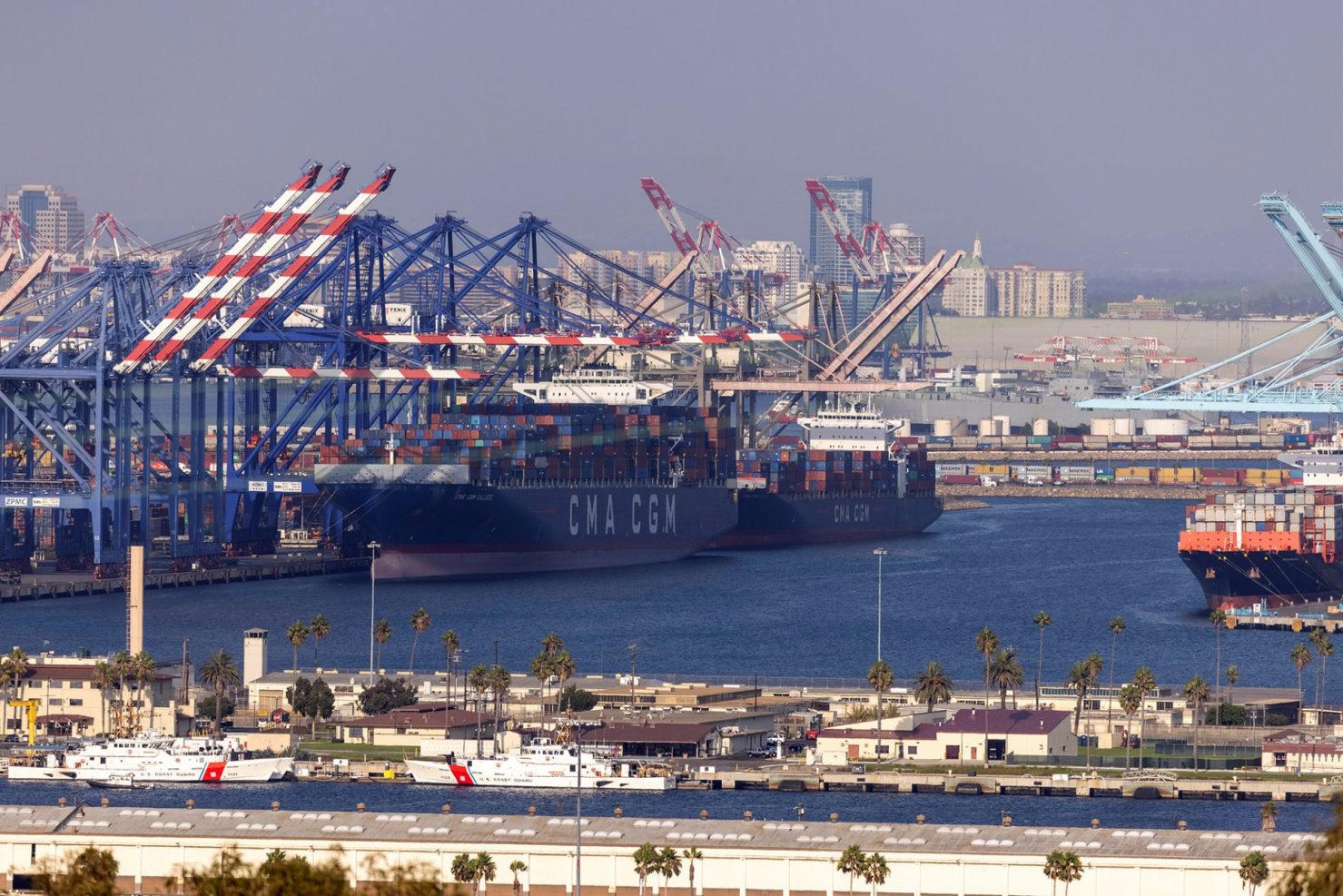 The congested Port of Los Angeles is shown in San Pedro on September 29, 2021. | REUTERS/Mike Blake/File Photo
Home
California
In California

Here’s What California Could Do to Fix the Supply Chain

Global supply chain problems have led to a massive backup at Southern California ports. At a hearing on Wednesday, California lawmakers talked with experts about what the state government could do to help, including locating temporary storage, growing the truck driving and warehouse workforces, suspending regulations, and creating a new inland port.

If you’ve never really thought about California’s ports or the global supply chain before the past month, that’s normal. But they’re having problems now, driven by the pandemic, and it’s causing a shortage of everything from computer chips to kitchen supplies.

California’s problem is a national one, too: The ports of Los Angeles and Long Beach together bring in 40% of all goods shipped to the U.S. by water. So now everyone from port directors to President Biden is interested in fixing the situation.

The backlog’s origin story is complicated. Early in the pandemic, factories had to shut down or reduce their output. Shipping companies reduced their schedules, assuming people would be buying less stuff. Protective gear was sent to locations across the globe that don’t export many goods, so some of those shipping containers didn’t get returned.

Then, people did buy stuff — a lot of stuff. Warehouses struggled to hire enough workers to keep up with demand and they started getting backed up, leaving containers full of new goods at the ports, where they started to create traffic jams, said Chris Tang, a professor at UCLA’s Anderson School of Management who studies supply chain issues.

This week, California lawmakers talked with experts and stakeholders about what the state could do in the near term to resolve the backlog, and in the longer term, to prevent similar backups in the future.

“I mean, the simple answer to this crisis is that people stop buying stuff, but that’s not going to happen,” said Assemblymember Patrick O’Donnell, a Democrat whose district includes both the ports of Los Angeles and Long Beach. “So we need to respond, and we need to respond quickly.”

Already, federal, state, and local policy makers have taken action. On Oct. 13th, President Joe Biden announced the Port of LA would operate around the clock, a decision that came after the Port of Long Beach also decided to extend its hours. A week later, Democratic Gov. Gavin Newsom signed an executive order directing state agencies to look for land that could be used as temporary storage, identify freight routes that should be exempted from vehicle weight limits and identify training partnerships with private industry for port and logistics workers. In late October, the federal Department of Transportation said it would offer billions of dollars in loans to shore up California’s port and supply chain infrastructure. At the local level, authorities have allowed containers to be stacked four high, rather than the usual two, and said companies would be fined for leaving containers too long at the ports.

But, experts say the backlog may not be resolved until sometime next year. In the meantime, loitering ships are causing pollution and businesses across the country are facing shortages.

“It has become clear that this is a multifaceted problem, and it will require multifaceted action,” said O’Donnell at the hearing. “There is not one switch you can flip.”

So what can the state of California actually do to help?

Dee Dee Myers, director of the Governor’s Office of Business and Economic Development, said the solution she’d heard most frequently is for the state to identify parcels of land, either inside or outside port complexes, that can be used as additional temporary storage for containers.

Myers said the agency now has a list of several dozen potential sites, though there are complications for each. The government has a deadline of Dec. 15th to complete its survey, though they may be done sooner, Myers added.

Using other locations as temporary storage is something that private marine terminal operators have been doing for some time, says Robert Leachman, a professor in UC Berkeley’s Industrial Relations and Operations Research program. It makes sense, he said, as a short-term solution.

But leaving goods strewn across Southern California could create new problems, such as how best to retrieve them later and negotiate with communities opposed to having a ton of big rigs coming and going, experts said.

Contributing to the backup is a shortage of truck drivers. Truck drivers are independent contractors and are paid per delivery rather than by the hour, Leachman said. When they’re stuck waiting at the ports for hours to get their container, it means they’re working more hours for the same take home pay. Fewer drivers are willing to take that deal.

There’s also a shortage of warehouse workers. “The jobs are hopelessly unattractive so we can’t get enough people to fill them,” Leachman said. He thinks wages will need to rise to fill those positions.

California transportation secretary David Kim said he’s met with the White House, the Governor’s Office of Business and Economic Development, California’s Labor and Workforce Development Agency, and the Department of Food and Agriculture to discuss driver recruitment and retention. The federal transportation department will also be working with state DMVs to expedite the licensing process for truck drivers.

The jobs are hopelessly unattractive so we can’t get enough people to fill them.”

A coalition of more than a dozen business groups sent Newsom a letter requesting that he suspend several regulations and laws to help solve the supply chain issues. Among their proposals:

A quick response came from Assemblymember Lorena Gonzalez, the San Diego Democrat who introduced both worker laws. She pointed out that the independent contractor law does not currently apply to truck drivers; a battle over an exemption for the drivers is currently wending its way through the legal system. Additionally, the warehouse law isn’t slated to go into effect until January of 2022, leading Gonzalez to call the proposals “deceptive.” She also said the shortage of truck drivers has been decades in the making, driven by deregulation of the industry and decreasing working conditions.

“Instead of offering good-faith proposals that address the underlying problems contributing to labor shortages and congestion at our ports, the industry-backed proposal is a thinly veiled attempt to cut costs on the backs of essential workers and skirt future enforcement efforts,” she wrote.

When asked if the administration would reconsider laws regulating warehouses, Myers didn’t offer a conclusive response. “I think we’re willing to look broadly; I think there’s some things that we won’t be willing to change,” she said. She also said the administration may relax regulations such as some weight limits for trucks.

The industry-backed proposal is a thinly veiled attempt to cut costs on the backs of essential workers and skirt future enforcement efforts.”

Another, longer term solution suggested was the creation of an inland port — sometimes called a dry port — to function as a distribution point for incoming goods. Inland ports are connected to sea ports by road or rail.

“An inland port in the Central Valley would do wonders in terms of relieving choke points, and facilitating the movement of cargo from the San Pedro Bay ports up to northern and central California by truck or rail,” said Transportation Secretary Kim at the hearing. He said a proposal is currently being developed by the Fresno Council of Governments, who have secured a $1 million grant from the US Department of Transportation to study the idea.

This would alleviate some of the pressure at water ports, Vyas said.

But Leachman is dubious of the value of a new inland port. It would require building additional terminals for cranes to unload containers, he said, which is costly. He thinks those investments could be better made elsewhere. If a new inland port was built somewhere in the middle of the state, like Fresno, it could result in a lot of extra miles for truck drivers. Most of the distribution facilities are in the Inland Empire and near Southern California the ports.

“If you end up needing to go to those warehouses anyways, it’s sort of wasted miles right? You go to Fresno, they’re going to have to double back to Ontario or Pomona,” Leachman said.

So how much can the state really do?

In short, not a lot, Vyas said. The California ports are just one point in the very long supply chain, stretching from manufacturers across the globe, to consumers in small midwest towns and large east coast cities. California’s state government has limited influence on the international actors involved, and the millions of consumers across the U.S. who order goods. There aren’t quick fixes for growing the warehouse and truck driving workforces.

But the issues could be resolved before too long anyway: Tang expects things will calm down by February or March of 2022.

(This story by Grace Gedye first appeared on CalMatters and is made available through the CalMatters Network.)

Previous
As UN Tackles Twin Climate Threats, California Struggles with Them, Too 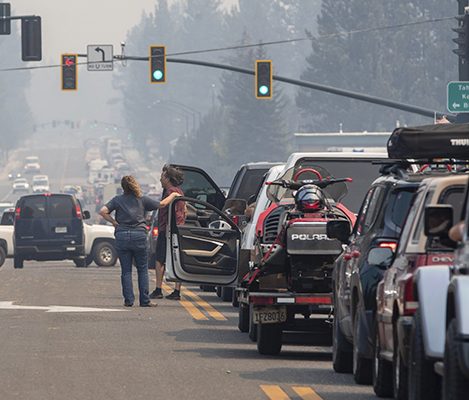