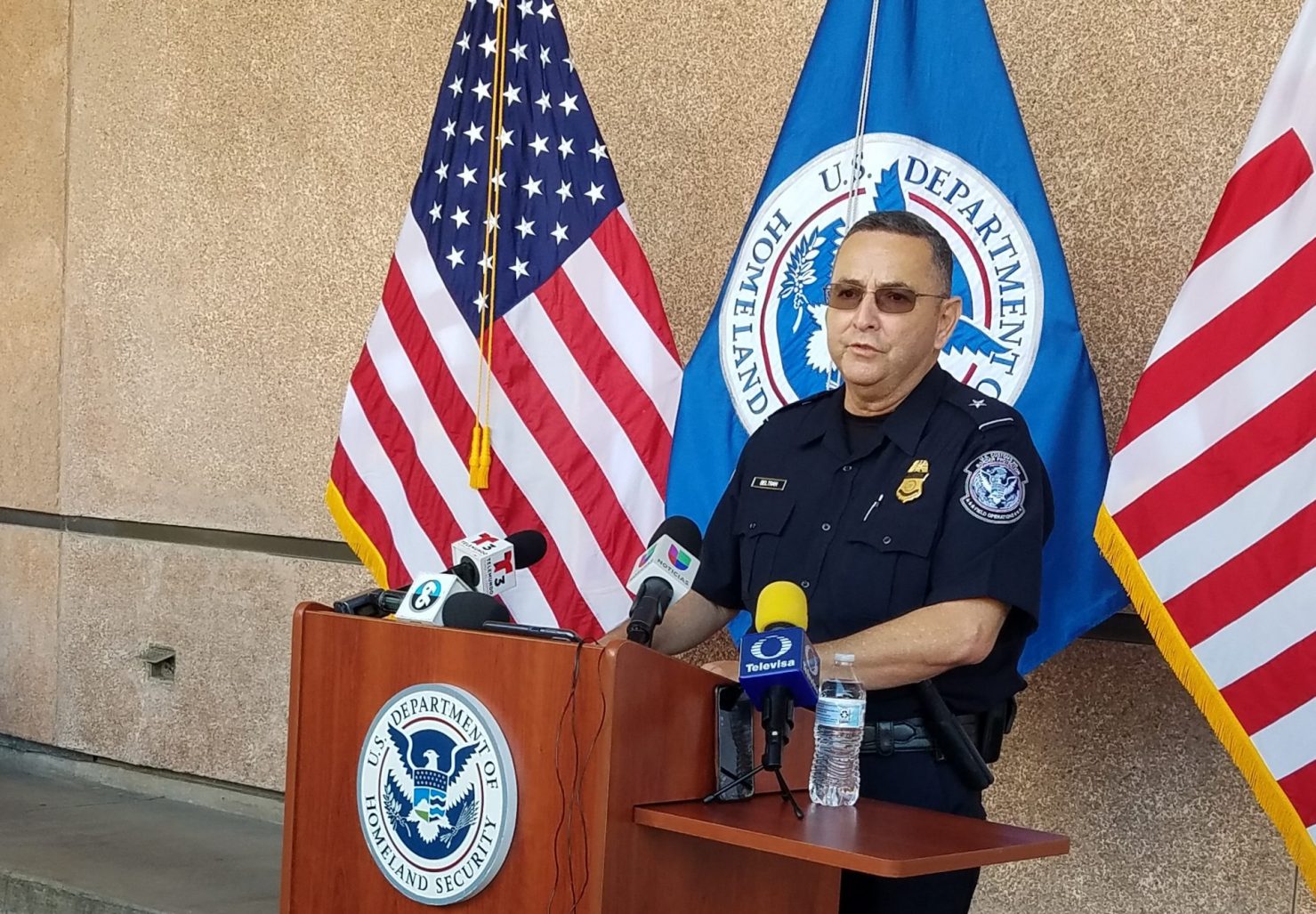 Sergio Beltran, U.S. Customs and Border Protection officer in charge of the Calexico ports of entry, speaks during a press conference on Wednesday, Nov. 3, as he explains what is expected when travel for fully vaccinated nonessential travelers resumes on Monday morning, Nov. 8. | JULIO MORALES PHOTO
Home
Local News
In Local News

CALEXICO — Come Monday, Nov. 8, when fully vaccinated foreign nationals will be allowed entry into the United States for non-essential purposes, infrastructure impacts are expected on both sides of the border.

On Wednesday, Nov. 4, federal officials sent a message that appeared aimed toward Mexican audiences, one in which prospective northbound travelers at Calexico’s ports of entry were told to anticipate longer wait times.

“Let’s not make our peak travel times more congested than they need to be,” said Sergio Beltran, U.S. Customs and Border Protection officer in charge of the Calexico ports of entry. “Let’s save those times for essential trips across the border.”

Meanwhile, Calexico officials gave more of a glimpse into how the surge of expected border-crossers would be moved around and outside the city once they make it past the port, largely relying on public transportation.

Calexico City Manager Miguel Figueroa explained during his report to the City Council on Wednesday night that a special meeting will need to be convened in the coming days to address permitting for a bus operator to serve the thousands of nonessential travelers expected to return to Calexico’s streets on Monday.

“I want to reference the bus service that we’re looking to provide at the local level. We are ready right now. The Planning and Building Services Department, along with the Calexico Police Department, have vetted and determined that we have current business that wishes to provide such service in our city, in order,” Figueroa said.

“In order for this to proceed, once all the documentation has been vetted by staff, this council have to consider a public necessity and convenience permit for the operation to occur,” he added.

Figueroa did not reveal the company taking on the task, but whichever service has stepped up would have to made public once the permit approval comes before the council.

The impending special meeting, the city manager said, will come with the required advance public notice in accordance with California government codes.

It’s yet unclear what the expectations are in terms of Calexico vehicular and foot traffic increases in the immediate days following the easing of travel restrictions, but in pre-pandemic conditions, daily border-crossers could regularly exceed 50,000 people.

In 2014, Imperial County saw 18.6 million people traveling into Imperial County from Mexicali through the Calexico-area ports of entry, according to a 2017 Imperial Valley Border Economic Impact Study. An average of 51,100 individuals entered the county each day during the study period, with 32,300 people entering Calexico daily through the downtown port alone.

As of noon on Thursday, Nov. 4, the city of Calexico had yet to call its special meeting.

In terms of the CBP’s preparation for Monday, Officer Beltran communicated tips meant to help ease what is anticipated to be congestion at the port entering from Mexico.

Some of those measures Beltran mentioned include verbally declaring one’s fully vaccinated status upon encountering a CBP officer at the ports’ vehicle inspection or pedestrian lanes.

Prospective travelers are also being encouraged to have their proof of vaccination ready to display in case a CBP officer asks for such documentation, he added.

Locally, peak times include 4 a.m. to 9 a.m. Monday through Friday, and 2 p.m. to midnight, Saturdays and especially Sundays, Beltran said.

Additionally, travelers in need of an I-94 permit are being encouraged to use the “CBP One” mobile app to apply and pay in advance of their crossing. The mobile app enhances the traveler’s experience while shortening the time it takes to obtain the permit, Beltran said.

Lastly, would-be travelers are reminded to use the correct lane to gain entry into the United States, whether it be a SENTRI, Ready Lane or general lane.

Those travelers who are determined to not be fully vaccinated will be returned to Mexico. Instances where an unvaccinated foreign national is repeatedly ordered to return to Mexico will not result in any kind of monetary fine but will be archived in the individual’s travel history records, Beltran said.

“Officers are going to be conducting spot checks to make sure travelers are carrying proof of vaccination,” Beltran said. “Every traveler will not be asked to provide proof, but they will all be required to carry it.”

The lifting of the nation’s restriction against non-essential travelers comes some 18 months after the policy was put in place in March 2020 to help prevent the potential spread of COVID-19.

Starting in January, all essential and non-essential travelers will be required to be fully vaccinated to enter the country, CBP stated. This includes unvaccinated individuals who previously had been crossing the border for essential travel, such as employment and medical reasons.

The requirement to be fully vaccinated to enter the country does not apply to U.S. citizens, permanent legal residents or documented foreign national under the age of 18, CBP officials stated.

Only those foreign nationals who have been fully vaccinated with a vaccine that is recognized by the U.S. Centers for Disease Control and Prevention will be permitted to enter the U.S. A list of those CDC-recognized vaccines can be found at its website, https://www.cdc.gov/coronavirus/2019-ncov/travelers/proof-of-vaccination.html

A person is considered fully vaccinated 14 days after receiving a dose of the single- or double-dose vaccine, CBP stated.

In preparation for the expected surge in northbound cross-border traffic, CBP has adjusted the assignments of its personnel to help facilitate the experience.

“We are prepared to staff all available lanes during those peak times,” Beltran said.

Two weeks ago, City Manager Figueroa had said that a press conference would be announced to release additional information on some of the impending concerns for the city. During Wednesday night’s council meeting, council member Raul Ureña asked whether a conference was still planned.

Figueroa said there is not, but that keep details would emerge over times as these special meetings tied to the opening are held.

“Moving forward, especially here in Calexico, I anticipate that there’s going to be more items that are going to continue to incentivize and support the economy and the local businesses, specifically for the border crossings for the tourists,” Figueroa said.

Previous
California Redistricting 101: What You Need to Know