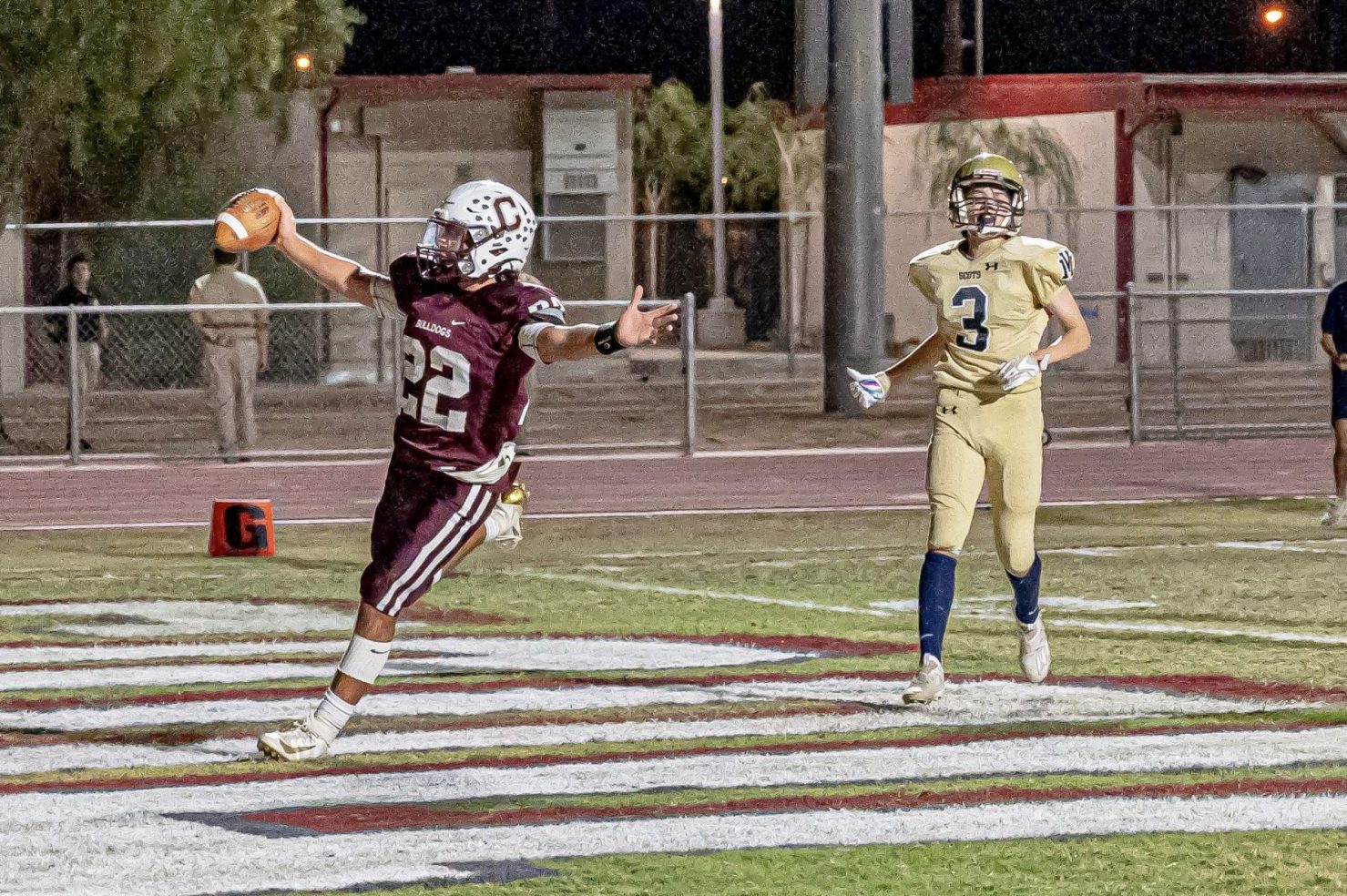 Calexico High senior quarterback Abram Zazueta scores a touchdown in the first quarter of the Bulldogs’ 34-30 victory over Vincent Memorial Catholic in the Battle for the Border rivalry game at Ward Field in Calexico on Friday, Oct. 29. | CAMILO GARCIA JR. PHOTO
Home
Sports
In Sports

CALEXICO — One yard. It’s only three feet but it means so much in the sport of football.

On Friday, Oct. 29, it was the difference between winning and losing in the annual Battle for the Border clash between crosstown rivals Calexico and Vincent Memorial Catholic at Ward Field on the Bulldogs’ campus.

Trailing 34-30 with just six seconds left and 40 yards from the end zone, Vincent Memorial sophomore quarterback Jacobo Elias eluded a ferocious Calexico pass rush, got himself some space and heaved a final game-winning pass attempt toward the end zone as time expired. Waiting at the 4-yard-line was his teammate, junior receiver Andre Rodriguez.

Rodriguez got behind a Calexico defender, caught the ball and turned toward the end zone. Bulldogs’ senior defensive back Pedro Cruz lunged at Rodriguez and knocked him out of bounds at the 1-yard-line to preserve Calexico’s thrilling 34-30 victory over the Scots.

“When I missed him on the sack and saw him throw the ball, my heart dropped,” said Ernie Sanchez, Calexico’s senior running back who was in the game on defense late to chase after the elusive Elias. “When I saw him catch it and dive for the pylon, there were so many emotions going through me at once. I saw them say he went out of bounds at the one and I knew we had done it.”

Celebration ensued on the Calexico sideline while disbelief was abound on the Vincent Memorial side as the Scots and their faithful fans thought Rodriguez had gotten to the pylon.

“I knew I needed to have my offensive line get me some time and I saw my guy (Rodriguez) get behind the defender,” Elias said about the final throw. “We had the mindset that with our two-minute drill we could go down and win the game.”

Trailing 30-28, Calexico got the go-ahead touchdown with 2:50 left in the game when senior quarterback Abram Zazueta scored on an eight-yard run. Zazueta had the option to pitch the ball or keep it and he found his opening and exploded into the end zone. The two-point conversion failed but the Bulldogs had the lead, 34-30.

“He (Zazueta) was clutch for us all night,” said Fernando Solano, Calexico High’s second-year head coach. “He was big on offense and on defense for us. That last touchdown he saw the pitch man was covered and kept it and found his lane up the middle.”

Zazueta finished with 81 rushing yards on 10 carries and two touchdowns, plus 2-for-3 passing for 23 yards and on defense he had a key third-quarter interception that would lead to a Bulldogs’ touchdown.

“That was probably the best game I’ve ever played,” said the 16-year-old Zazueta. “Tonight we just played with a lot of energy and after you hear the crowd you get hyped up even more.”

Calexico played a near-perfect first quarter, rattling off a 14-play, 81-yard opening drive with Zazueta finishing it with a nine-yard touchdown run. The drive gave the Bulldogs a 6-0 lead, ate up more than nine minutes and kept the high-powered Scots’ offense on the sideline.

After a three-and-out by Vincent Memorial on its first possession, Calexico needed just four plays before Sanchez sprinted 32 yards for a touchdown and ran in the two-point conversion to give the Bulldogs a 14-0 lead after the first play of the second quarter.

Sanchez finished the game with a whopping 202 yards rushing on 22 carries and three touchdowns.

“I couldn’t do it without my linemen. They do all the hard work and I just have to follow their blocks,” said the 17-year-old Sanchez. “We knew it was the last game of the (regular) season and we had to ball out for this one.”

Calexico took a 14-9 lead into halftime with the confidence of knowing it had held the potent Scots’ offense to 46 yards of total offense in the first 24 minutes.

But the second half was a different story as Vincent Memorial got going behind the arm of Elias, who was just 1-for-9 passing in the first half for three yards.

On the opening drive of the third quarter, Elias hit junior Armando Apodaca for a 54-yard touchdown pass and then Elias kicked the extra point to give the Scots their first lead at 16-14 with 10:38 left in the third quarter.

Three plays later the Bulldogs fumbled the ball back to the Scots, who would find the end zone in just five plays when Elias connected with junior Max Ascolani on a 16-yard touchdown strike. He again booted the extra point and Vincent Memorial was up 23-14 midway through the third quarter.

Elias finished the game completing 12-of-30 passes for 200 yards, three touchdowns and an interception.

The loss ends the Scots’ season at 5-5 overall and 2-2 in the Desert League. Vincent Memorial finished third in the DL behind Palo Verde Valley of Blythe (4-0 in DL and 8-2 overall) and Holtville (3-1 in DL, 8-2 overall). 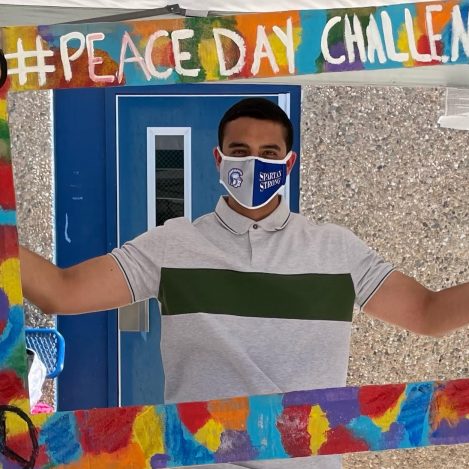 Peace at the Heart of El Centro Teacher’s Message