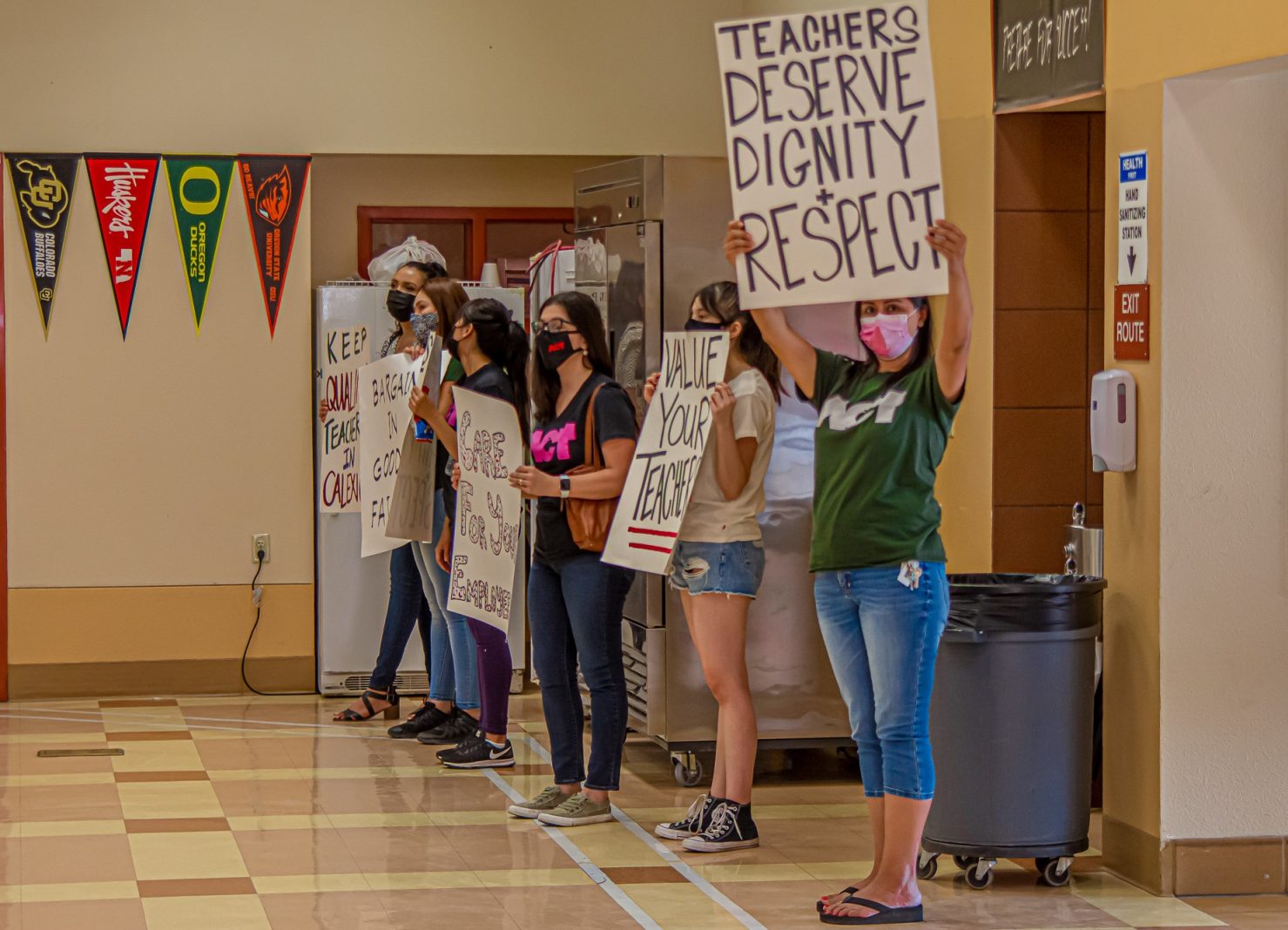 A special meeting of the Calexico Unified School District board was packed with teachers carrying signs upset over ongoing contract strife. Several district staff members stood at the back of the Cesar Chavez Elementary School multi-purpose room holding up signs on June 22. The district on Wednesday, Oct. 27 issued a statement on its website seeking to determine whether it is an impasse with its teachers. | CAMILO GARCIA JR. PHOTO
Home
Education
In EducationLocal News

Teachers’ Union is Seeking Advice on Legal Obligations, Next Steps

CALEXICO — Contract negotiations appear to have come to a standstill between the Calexico Unified School District and the Associated Calexico Teachers.

The district stated it is requesting the California Public Employment Relations Board determine whether an impasse has been reached in its contract negotiations with ACT, the district announced Wednesday, Oct. 27.

The district is requesting a PERB determination and potential appointment of a mediator because, it claims, the teachers’ union “continues to ignore” the district’s health benefits proposal.

“The District team informed the ACT team that it believes the negotiations are at impasse,” the district announced in a “Negotiations Update” posted to its website on Wednesday.

“The District asked ACT if they wanted to file a joint request with PERB. ACT has not yet responded to the District’s invitation to file the request jointly.”

The district’s announcement stated it planned to submit its request for a determination to PERB sometime this week. The announcement followed a brief meeting between negotiators earlier in the day.

Juan Rodriguez, ACT negotiator, said that meeting concluded quickly after the district’s legal counsel made it clear the district did not intend to offer a counteroffer to the district’s previous salary proposal offer.

Legal counsel also advised ACT negotiators that the district’s current salary and benefit proposals represented all the district was “able to give,” Rodriguez said.

“There’s a big difference between can and want to give,” he said in a phone interview Thursday, Oct. 28.

He made it clear that the district is alone in believing an impasse has been reached. For its part, ACT has plans to consult with the California Teachers Association to determine its legal obligations and next steps.

Legally speaking, an impasse is generally defined as the point when an employer and a union reach a stalemate in contract negotiations where one or both sides believe to continue talks would go nowhere. Customarily, this is the point an employer can impose its last, best offer. A union can also chose to strike at this point if the collective body agrees.

Calexico Unified School District is offering a 15 percent salary increase over a three-year period. It is also proposing to place a $21,500 cap on the amount of monies it expends for a teacher’s annual health benefits.

Since the start of negotiations, ACT has made it clear that it wanted to resolve negotiations regarding salary proposals prior to any negotiation of health benefit proposals.

Further, ACT team members have been attending health insurance benefits meetings in recent months so that they can inform themselves and educate union members about the proposed changes in benefits.

If anything, the district’s failure to include the 2017-2018 school year in its salary negotiations with the teachers’ union suggests it is the one that is ignoring the other party’s proposal, Rodriguez said.

The union has also rejected the district’s initial proposal that would have provided a mixture of on- and off-schedule pay increases that the district characterizes as a 15 percent boost in compensation.

Calexico Unified School District board President Ciro Calderon said that as much as he believes that the teachers indeed deserve to be compensated in a manner that is agreeable to them, the district simply cannot afford it.

At present, the district is anticipating expenditures to exceed revenue by about $9 million during the 2023-24 school year, Calderon said.

And though he said he felt that negotiations could be salvaged, the idea to bring in a mediator would likely produce the best results.

“I’m hopeful that with this mediator both sides will see what is really needed for the betterment of our students and our teachers,” Calderon said in a phone interview on Thursday, Oct. 28.

The district is currently looking at different health benefits plans and is considering one whose family plan tops out at about $23,000, less than the current $26,000 family plan that the district offers and for which a union member does not have to contribute to, Calderon said.

Should the district settle on a health benefits provider that offers plans less than its currently available plans, teachers would still be offered the district’s 15 percent salary increase proposal.

“So, they would end up getting more of a raise,” he said.

If PERB determines that the parties are at impasse, it will assign a mediator to attempt to negotiate a resolution between parties. The mediator has the authority to work with the parties for days or months.

“If and when PERB confirms that impasse exists, the District will continue to negotiate and participate in the impasse mediation process in good faith with the hope that an overall agreement can be reached,” the district stated in its announcement. 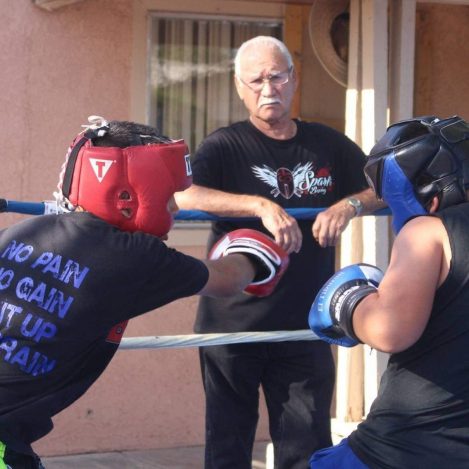