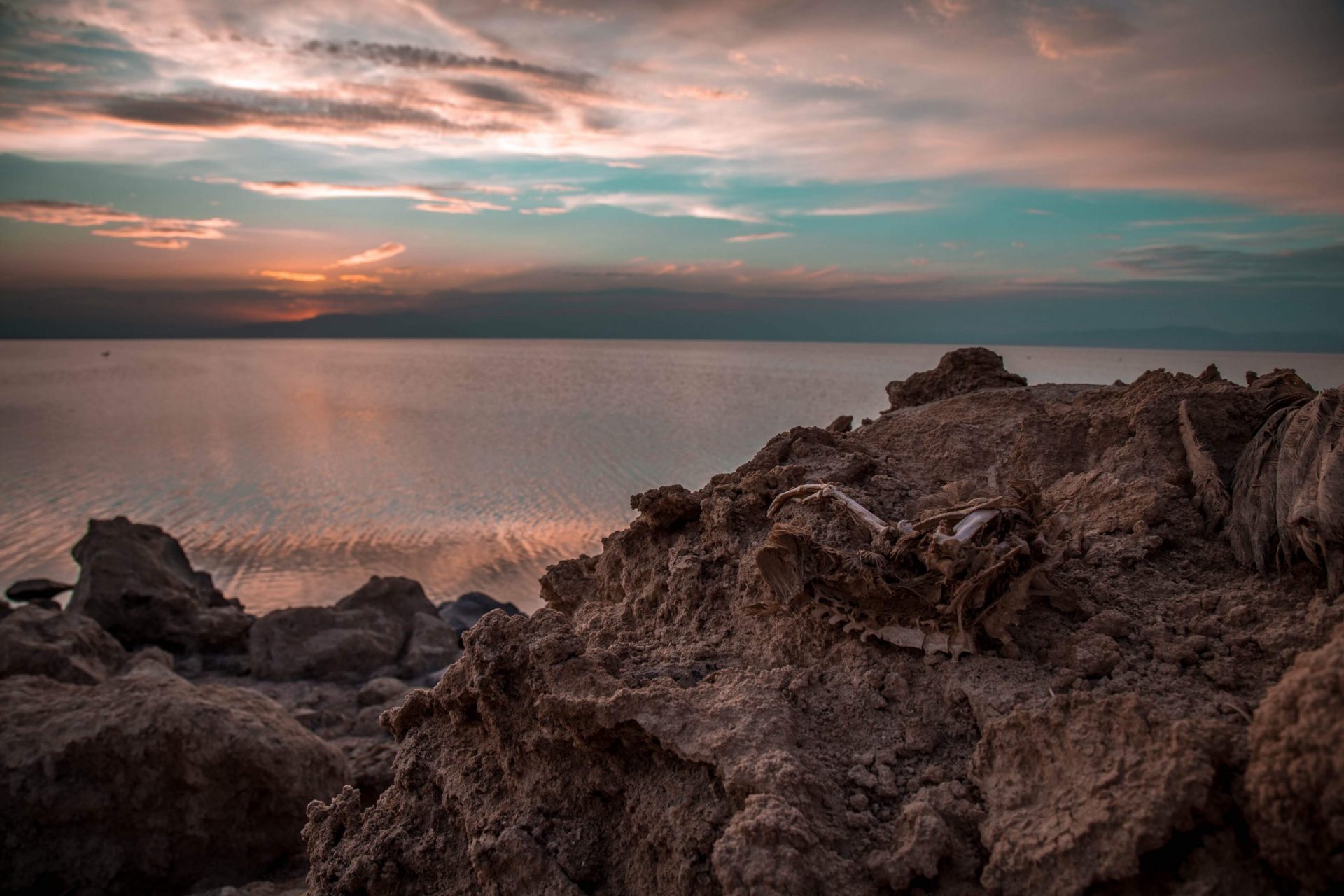 The carcass of a sea bird blends in with a rock near the southern edge of the Salton Sea, not far from the site of a new wetlands restoration project that broke ground in January. | LUKE PHILLIPS PHOTO
Home
Regional News
Share

SALTON CITY — The Salton Sea needs no introduction. In its heyday, its seaside resorts were the darling of real estate developers and investors, and a playground for the likes of Marilyn Monroe and Frank Sinatra.

Boy, have times changed. The lake is dying, and real estate investors moved on decades ago. Most of its coverage focuses on local officials imploring Sacramento or Washington to fix the lake, or businesspeople with complicated proposals and dollars signs in their eyes.

Unfortunately, the voice of the community — the people that live at the Salton Sea — usually gets drowned out in the noise.

But not last weekend.

Those community voices took center stage on Saturday, Oct. 23, in Salton City at the second edition of the Salton Sea Film Festival. As well, the community is invited to view the films at Salton Sea Film Festival’s Facebook page and YouTube channel and vote for their favorite film for the People’s Choice Award through Nov. 14 by putting a “Like” or a “Thumbs up” on their favorite film.

Imperial resident Roy Dorantes conceived of the festival last year as a creative outlet for locals to encourage them to research and think about the Salton Sea.

Despite the pandemic, locals took him up on the opportunity last year, and the Salton Sea Film Festival was born.

The format is simple. Current or former residents of Imperial County are welcome to participate. Submissions were to be three to five minutes in length, with a focus on the Salton Sea.

The judging panel, composed of journalists, entertainment industry workers and environmental advocates, were to evaluate films according to content, creativity, visual and image quality, sound quality and story structure.

Winners of this year’s entries were announced at the event, which was on Oct. 23 in a common room at Sea View Estates & RV Park & Spa, 336 Seaview Drive, Salton City.

Nelly Jade Manoiu’s film, “The Ancient Lake,” won first place in the high school category, and was declared the best film of the festival. Her father, Daniel, accepted the award.

Tamara Rodriguez was awarded first place in the adult category for her film, “Salton Sea Poem.”

“There’s talent among these filmmakers. And you can tell they really care, not just about the future of the sea but in communicating to the outside world the heart of their home,” said judge Richard Montenegro Brown, editor of the Calexico Chronicle/Imperial Valley Weekly and Holtville Tribune.

The simple format gives filmmakers plenty of room to tackle the Salton Sea as they saw fit.

Take, for instance, two documentaries produced by local middle school students. Both films do an admirable job of educating viewers about the lake.

Jack F., Jesus G., Sebastian Z. and Aiden A. presented facts about the Salton Sea’s past, its present situation, and pointed out that, “Fixing the Salton Sea would be the largest liquid project in the northern part of the United States of America since the Hoover Dam.”

Wendy A., Aly J., Mariana C., Avril L., Serenity G. and Vida B. went further and included charts and data about the lake’s elevation drop and the detection frequency of herbicides like glyphosate in various bodies of water.

Lilia, a high school student, produced “A Very Special Place,” a heartfelt tribute to her town at the edge of the Salton Sea.

Lilia spoke in Spanish about the things she loved about her town, wide-angle shots filmed from a moving vehicle show viewers what she sees: shore, lake, sky, markets, and more.

“I don’t like to go outside in the afternoons very much because it’s always hot in the afternoons, but it it’s getting darker,” read the English subtitles. “I go outside just to watch the sunset and watch until nightfall. And about the lagoon, perhaps nothing can be done with it, but it’s quite beautiful from a distance. And much more if it is dawn because it reflects the sun very beautifully against the water.”

Father and daughter team Daniel and Nelly Jade Manoiu produced “The Ancient Lake,” in which Nelly Jade explores the remnants of the historic Lake Cahuilla, which once filled the Salton Sink. The wide-angle shots and sweeping vistas depicted in the film work just as well in a classroom and a tourism website. As for the clever ending, you’ll have to see it for yourself.

Alejandra Matus and Keely Mikkelsen produced an animated film in which they recalled their elementary school’s air quality flag system. A green flag meant that it was a good air day, and everybody could play outside. On the other end of the spectrum, a red flag meant that the air quality was at its worst, and everyone was advised to stay indoors.

Last year’s winner, Jose Renteria, produced “Sea Wishes,” a music video for a song he wrote about the lake.

Renteria worked at the Salton Sea State Recreation Area and the Sonny Bono Salton Sea National Wildlife Refuge and used last year’s film to counter the negative ideas that visitors initially had about the Salton Sea.

This year’s entry, the music video, has a decidedly soothing vibe.

“I wanted to show the Salton Sea in a positive way,” he said. “Most people tend to focus on Bombay Beach. There are abandoned homes, but it doesn’t represent the Salton Sea fully. I’ve been in it, I’ve kayaked it, I’ve fished it, live here and I have a totally different perspective.”

There is no denying that some of the films are rough around the edges. But that’s part of the festival’s charm. It’s open to everybody regardless of skill level or equipment budget.

Roy Dorantes, the festival’s organizer, said he posted some short videos online on how to make a film.

“Use whatever is available to you, whether it’s a phone, a camera or a DSLR,” he said. “Don’t wait until the time is perfect. Use what you have. Last year we had a kid who didn’t have anything, and we let him borrow equipment. When you have a story to tell about where you live, technology is not a limit.”

In addition to the juried selections, filmmaker and actress Shaun Rylee showed her independent short film, “Question Everything,” which is nominated for several independent film festival awards. The backdrop, of course, is the Salton Sea.

The film festival is supported by Dorantes’ RDMedia Films, Court Appointed Special Advocates, and EcoMedia Compass. Winners will share a combined $3,000 in cash prizes, and the Saturday’s event will be recorded and broadcast on Yuma-Imperial County’s CBS affiliate, Channel 13, on Oct. 30.

(This story was updated on Monday, Oct. 25, with the winners of the event and additional media.) 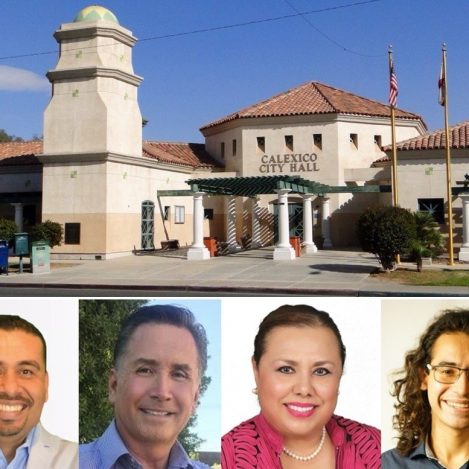