CALEXICO — The following reports were collected from the Calexico Police Department call logs from Oct. 11 through Oct. 16.

4:02 p.m.: Police responded to a traffic accident on the 700 block of Imperial Avenue involving two vehicles that collided head on in the center turn lane. One of the drivers sustained minor injuries and was taken to El Centro Regional Medical Center.

4:16 p.m.: A man out for a walk on the 1000 block of Luna Court reported finding a black and brown shotgun with the serial number removed. The man took the gun back to his residence before calling police to collect it.

8:34 p.m.: Police responded to a fire at the former Pizza Hut building located at 525 Imperial Ave. A tire had been propped up against the building and had been used to ignite the fire, which was deemed an arson. A Calexico Chronicle photographer at the scene of the fire told police that he saw a man wearing all black running away from the area westbound on Sixth Street. The man was described as being approximately 6 feet tall and 240 to 250 pounds. Police searched the area for the suspect but were not able to locate him.

1:51 a.m.: Police responded to a suspected arson fire at a residence on the 400 block of Grand Street. Arriving officers found a studio to the rear of the main residence in flames and heavily damaged. Police evacuated the residents, who were asleep at the time, and searched the area but were unable to locate any suspects. The fire caused an estimated $5,000 in damages.

12:41 a.m.: A police officer in plain clothes and an unmarked car was conducting surveillance on the 100 block of West Fifth Street, on the lookout for the arsonist at large in Calexico, when he witnessed a man enter a parked Ford F150 and remove the vehicle’s stereo. Ivan Ramirez was arrested on the scene and cited for theft and for possession of stolen property.

4:25 a.m.: An officer conducting arson surveillance spoke with a suspicious subject on the 1000 block of Ollie Avenue. The man, later identified as Rene Gilberto Romero, consented to a personal search and was found to be in possession of a knife with the blade extended and in the locked position. When asked why he was carrying a knife that way, Romero told police that it’s because he “likes to cut things.” The search also revealed a suspected methamphetamine pipe and Romero later admitted to using methamphetamine three times per week. Romero was arrested and cited for possession of a concealed dirk or dagger and for possession of drug paraphernalia and was later released on a promise to appear in court.

2:52 a.m.: Police responded to reports of a vehicle arson on the 100 block of McKinley Street. Arriving police located a suspect in the area that matched the description given by the reporting party, later identified as Ivan Nunez Ramirez. The witness was later able to pick Ramirez out of a lineup of suspects. Ramirez was found to be in possession of a lighter, but no smoking materials. Ramirez told police that he just happened to be riding his bicycle through the area and denied setting anything on fire. Ramirez was arrested for arson and was booked into Imperial County jail. 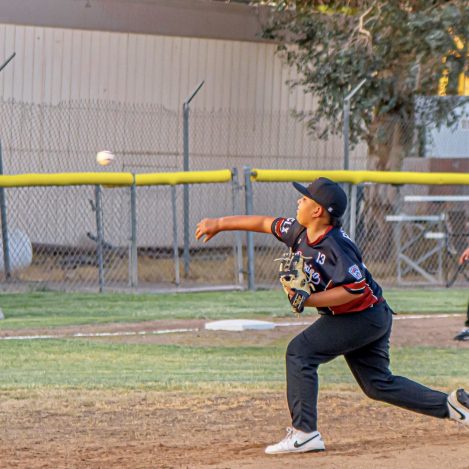 LITTLE LEAGUE: Calexico All Stars Knocked Out of Tourney