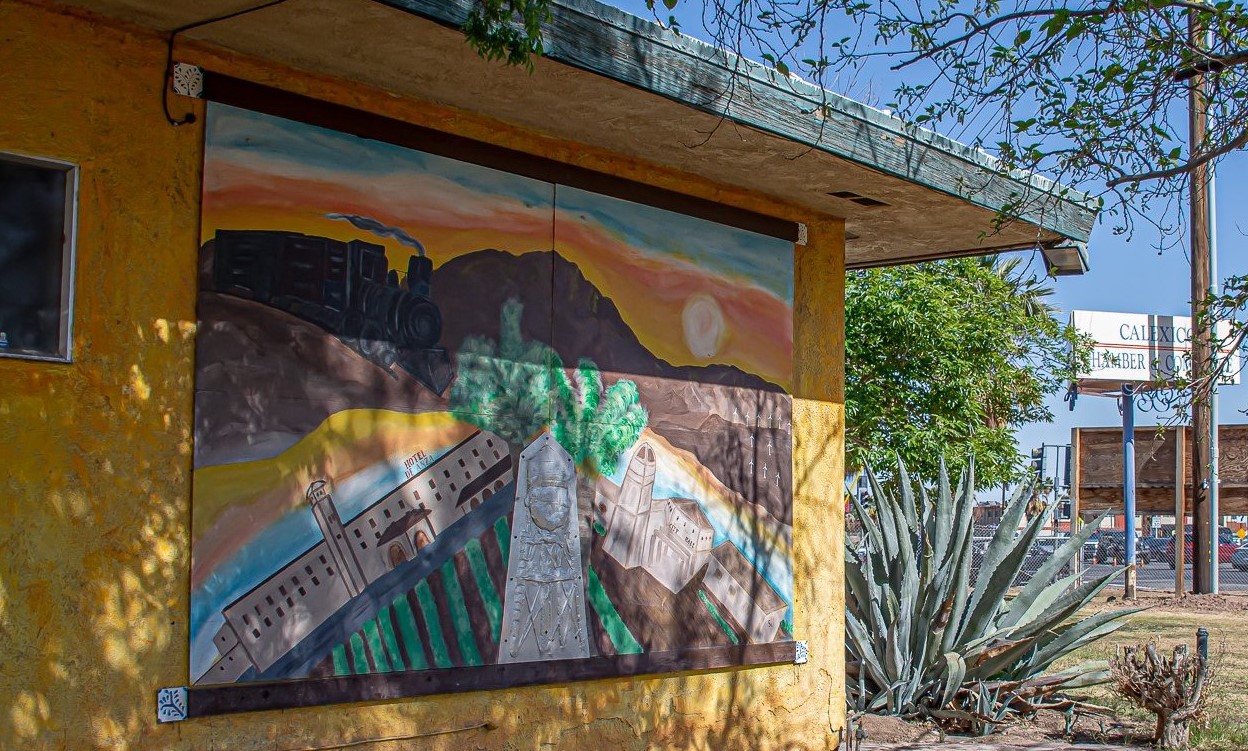 A piece of art that adorns the southwest facing wall of the Calexico Chamber of Commerce building at 1100 N. Imperial Ave. depicts a mixed media rendering of Hotel DeAnza, the Calexico water tower, and City Hall. On Wednesday, Oct. 20, the new president of The Chamber of Commerce for Greater Calexico, Katie Luna, will make a presentation to the Calexico City Council. Although she declined to reveal further details ahead of the meeting, it is believed Luna is helping lead a rebranding and reconstitution of a chamber that went dormant at the start of the pandemic. | CAMILO GARCIA JR. PHOTO
In BusinessLocal News

CALEXICO — Elected officials shared a sense of positive anticipation over what seems to be the public debut of The Chamber of Commerce for Greater Calexico before the Calexico City Council this coming week.

For Calexico Mayor Pro Tem Camilo Garcia, Luna is a known quantity who brings a certain level of professionalism to this nascent organization.

“I know that Katie is a proven leader,” Garcia said on Saturday, Oct. 16. “Whoever it is that’s part of this executive group for this new chamber, I think they’re really lucky. And we’re lucky as Calexicans to have such a great person and great leader as what Katie is bringing to the chamber and to Calexico.”

It isn’t entirely clear whether this group is a reconstituted and rebranded version of the former Calexico Chamber of Commerce that effectively closed at the start of the pandemic and saw its longtime executive director retire, but Luna’s involvement does signal a change of focus for the organization.

Garcia said he understands that the core executive board of The Chamber of Commerce for Greater Calexico is made up of the old chamber.

The newly named organization incorporated as a domestic nonprofit on Sept. 21, according to an online document. The address is listed at 110 N. Imperial Ave., which does not exist but appears to be an incorrect version of the old chamber address, 1100 N. Imperial Ave. The filing attorney is listed as Mitch Driskill of El Centro.

Luna, who identified herself as “president of the board,” declined to reveal any information until after Wednesday’s presentation. The meeting agenda posted on Friday evening, Oct. 15, had no backup materials.

“The board anticipated that we would receive early outreach and has agreed to save all commentary until after the City Council meeting,” Luna messaged the Chronicle when she was contacted on Saturday.

In additional documents found Monday, Oct. 18, the makeup of the new chamber became clearer in its connection to the dormant Calexico chamber.

An electronic filing with the California Secretary of State’s Office from Sept. 15 listed the chamber as a corporation and shows Luna registered as the “chief executive officer,” Gil Acuna as “secretary,” Daniel Romero as “chief financial officer,” and Steven Walker as the attorney of record.

Acuna and Romero have been long associated as board members of the dormant Calexico Chamber of Commerce.

Garcia said Luna and Calexico City Manager Miguel Figueroa have been meeting, but Garcia said he knows little about the group. Figueroa did not immediately return a request for comment.

At least one other Calexico council member was trying to find out more about the organization on Saturday afternoon.

“I’m very hopeful for the Greater Calexico Chamber of Commerce. I’m hoping that it focuses on small and micro businesses and that it is responsive to specific business needs and the nature of border commerce,” council member Raul Ureña said.

To that end, Garcia is optimistic that a revamped chamber will be essential to assisting the city in business attraction and retention efforts moving forward, especially in light of a decision on Oct. 6 to delay the hiring of an economic development staffer so that new public safety dispatchers can be hired.

A strong chamber working in the tandem with the city can fill that gap, Garcia indicated.

“I’m very excited for that because I know that there is someone out there that can actually follow up and execute. It’s very, very exciting to have Katie on board,” he said.

What a rebrand means is not entirely known. But looking to Brawley’s evolution as a clue, the initial press release stressed on building the Brawley chamber’s status as a “3C” chamber: “The Chamber of Commerce for Greater Brawley will continue to be a ‘Convener’ for leaders, a ‘Catalyst’ for business growth, and a ‘Champion’ in our community.”

While catchy for sure, chambers of commerce tend to be of the “3C” variety or the “3P” variety, according to various rebranding sources found online. While “3C” appears to move toward business education, growth, and advocacy for business-friendly policies on the local and state level, “3P” chambers appear to be those organizations that focus their efforts on “parades,” “pageants,” and “parties,” or more specific to Calexico’s past history, mixers, mariachi festivals, and the Lava Lamp awards.

Neither Garcia nor Ureña had any inkling whether this new iteration of the chamber would seek any monetary support from the city, but Garcia said that is not the role in a city-chamber dynamic.

“Financially right now, we’d have to look at it, but I don’t think that is something we can provide … and my take on that also is that we want a chamber to be independent,” the mayor pro tem said.

“Their job is to advocate toward the business community. A lot of times, we as a council, we have to make decisions that will go against the businesses that might have to do with regulations,” Garcia added. “We don’t want that relationship, or at least from my perspective, to be influenced because we’re contributing.”

At the request of the council back in April, Figueroa gave a brief recap of the city’s financial contributions to the chamber over the years.

Figueroa said at the time that between fiscal 2005-2006 and fiscal 2010-2011, the city’s now-defunct Redevelopment Agency had inked six agreements with the Calexico chamber that resulted in what was apparently some $337,000 in redevelopment dollars going to the chamber.

Those direct payments ended when the state dissolved redevelopment agencies with the passage of Assembly Bill 26 on Feb. 1, 2012. Before that, cities with established redevelopment zones had portions of their property taxes redirected back to cities from the state to address blighted areas.

Figueroa then revealed that $850,755.13 had been paid out in some form to the Calexico Chamber of Commerce between July 1, 2005, and Dec. 9, 2019. In addition to the six RDA-funded agreements, the total included membership fees, sponsorships of events, monthly allocations, and asset forfeiture funding that went to the chamber.

The pandemic has seen much change occur in the chamber landscape in Imperial County. Along with Brawley’s rebranding and Calexico’s move away from the spotlight, this past month saw the official debut of the Imperial Valley Regional Chamber of Commerce, a synthesis of the El Centro, Imperial, and Westmorland chambers that actually started work during the late summer.

In an article in the Calexico Chronicle earlier this year, in addition to Calexico’s chamber going dark, the Calipatria Chamber of Commerce also was inactive and still appears to be so. Holtville’s chamber has remained operational on a part-time basis and operates more under that “3P” direction.

There was an attempt by former Calexico Business Improvement District board member and downtown merchant Jesus Gallardo to establish the Calexico Independent Chamber of Commerce, which has gone before the Calexico City Council to ask for support in the past.

However, it appears that organization is active in name only and Gallardo has told the Calexico Chronicle in the past that it does not have a member base per se as it did not collect membership dues. There has been no updated posts or activity of that group’s social media site since April.

(This story was updated on Monday, Oct. 18, with additional documentation.) 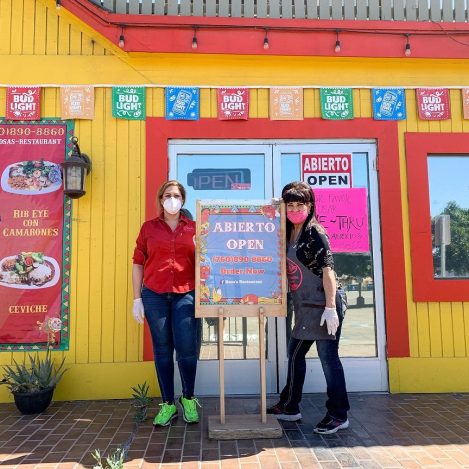 Can Restaurants Recover? Eat This, COVID