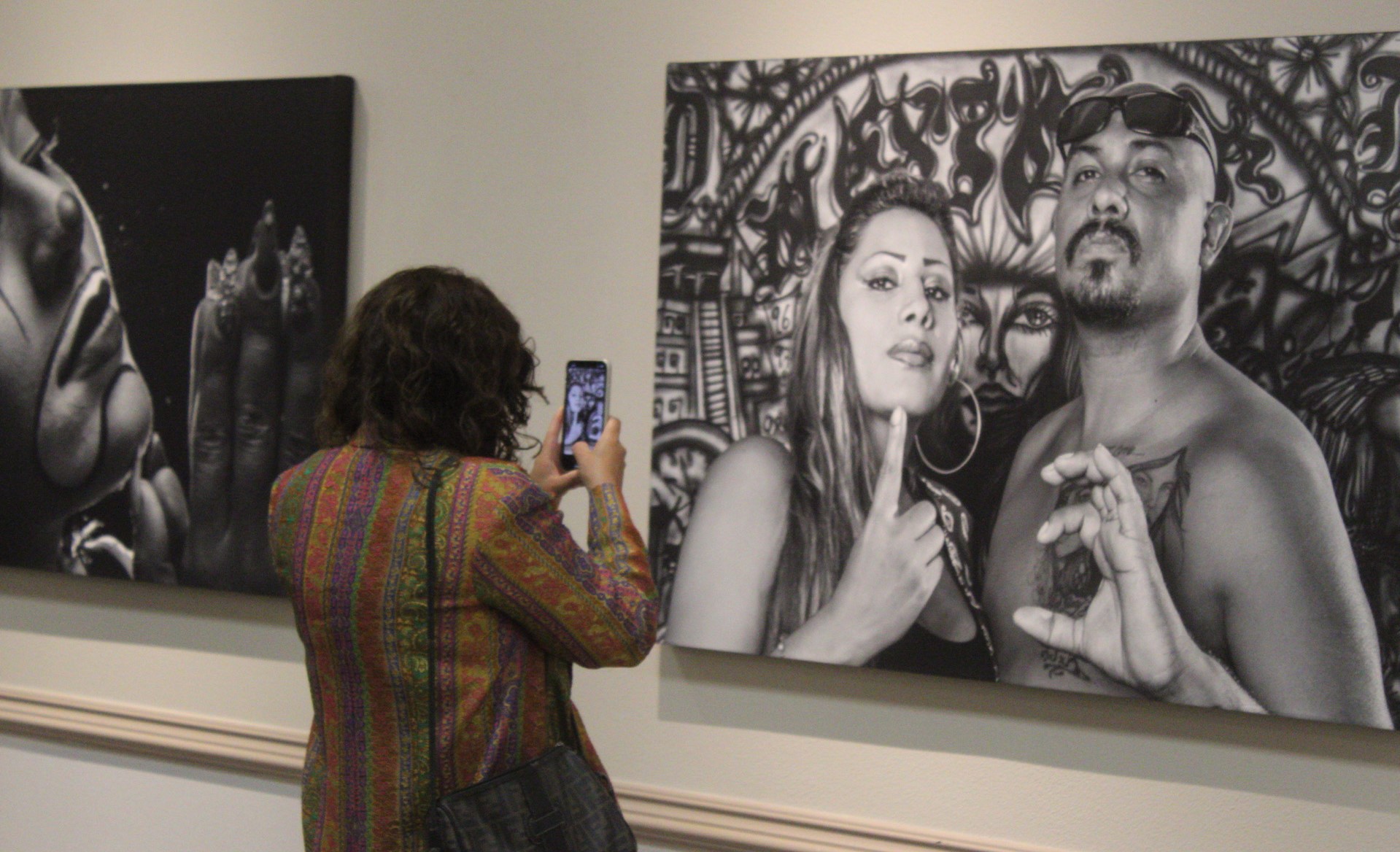 A patron of the Carmen Durazo Cultural Arts Center uses her cell phone to capture of a photo of a photo on display as part of Héctor Banda Hernández’s “Barrio Frontera” exhibition, which opened on Tuesday evening, Oct. 12, in Calexico. The exhibit will run through Oct. 25. | MEGAN JONES PHOTO
Home
Featured Stories
Share

CALEXICO — Reflecting the complexity of a subculture too often reduced to violent hooliganism, the black and white portraiture lining the walls of the Carmen Durazo Cultural Arts Center has been Héctor Banda Hernández’s attempt to reclaim the imagery of the cholo.

Inspired by the cholos and cholas he came in contact with during his five-year run as a community events photographer for Mexicali’s La Cronica newspaper, Banda documented “cholismo” because he saw a group of individuals that had members who were musicians, artists, and athletes, not just stereotypes of gang members or addicts.

The subjects of his photographic exhibition, “Barrio Frontera,” “were cholos who’d gotten away from gangs and drugs,” Banda said in an audio message left on Thursday morning, Oct. 14.

His use of the term “cholism” and “cholismo” are not to be confused with the European Spanish soccer term, but a proud reclamation of a subculture born in the U.S. that has migrated south and honors Mexican, Mexican-American, Chicano and migrant identity.

“I thought maybe one day, ‘I’ll give a voice to these people and help break the stigma that surrounds the subculture,’” he said in Spanish from Mexicali on Thursday.

The intent was to dignify them as part of an overall cultural project — “It’s a tribute to cholism and the culture that Mexico has,” Banda said.

On Tuesday evening, Oct. 12, Banda’s acclaimed exhibit — which debuted in Mexicali’s city gallery in 2015 and Centro Cultural Tijuana in 2018 — made its United States premier with an opening event at the Durazo Cultural Arts Center.

The man who was named Grupo Fotográfico Imágenes’ “photographer of the year” in 2015 could not attend Tuesday’s opening, unable to cross into Calexico due to nonessential travel restrictions still in place due to the ongoing pandemic.

In his stead, friend and colleague, Guadalupe Lopez, introduced the art installation.

“(This exhibit) was born more than 10 years ago from the need to give voice to vulnerable groups who have experienced discrimination and social intolerance. It has in its content, a distinct discourse of stories of greatness, struggle, overcoming social pressures, and pride for our roots in our cultural and ethnic diversity,” Lopez said during Tuesday’s opening reception. The exhibition will be up through Oct. 25.

Banda has a passionate sense of duty to be aware of social injustices and how he wants to participate as an artist in creating solutions for the progress of this community. His photographs humanize his subjects and tell their intimate, personal stories.

His subjects are not delinquents, he said on Thursday, but represent inspiring stories about people who’ve left behind their troubled pasts. His work is meant to uplift the community, highlight the relationships that exist among its citizenry and give a voice to vulnerable and marginalized groups.

“It is a message of peace and that things have to change,” the photographer said.

Married couple Claudia and Ruben Loera of El Centro and Mexicali are two of Banda’s friends and photo subjects. Claudia said she hopes that the exhibit will show people that cholos are not to be feared or judged for the way they look.

“It’s a community where we help out a lot of people,” she said Tuesday night while attending the opening, where she and Ruben were interviewed next a photo Banda took of them about two months ago. “People judge who you are just by looking at you; we hope this will help change that.”

Ruben and Claudia own Tumbado Clothing and are members of Revolution Car Club, one of several clubs, including Del Valle Car Club, Uniques Car Club and Holtville Car Club, which were participants in the opening reception.

Ruben Loera explained on Tuesday how car club culture fits in with the aesthetic and subject matter of Banda’s “Barrio Frontera” exhibition, and how the culture has changed for the more positive over time. A number cars were parked outside the Durazo art center at 412 Heffernan Ave. that evening.

“Back then, the car shows did have a lot of fights, but it has been about 10 years now where it did a 180,” he said. “Now it is more family oriented with clubs being more strict about not having any gang activity.” The Loeras said they hope the community will be receptive to the show as more cholo art is appreciated as such.

On Tuesday evening, as car club members and local dignitaries gathered to cut a ribbon signifying the opening of the exhibition, Calexico Recreation Department Manager Norma Gerardo presented certificates to the car club members who had loaned their vehicles for the event.

Mayor Pro Tem Camilo Garcia was in attendance and expressed his appreciation for the organizers and participants. He encouraged all attendees to “spread the word” about the exhibit so that these types of events can become more commonplace. The Calexico Arts Council and the California Arts Council have provided the funding for these type of art installations to be made available to arts center.

One request that Banda had made, he said, was that the opening of the exhibit occur on or near Monday, Oct. 11, long recognized in this country as Columbus Day, but increasingly recognized as Indigenous People’s Day or Día de la Raza.

Latin American countries have celebrated Día de la Raza for many years, with Mexico recognizing it as such since 1928. Christopher Columbus has come to be known among indigenous peoples and Latinos as a colonizing figure often having been credited with “discovering America”; it was never lost the native peoples up and down the Americas.

After the ribbon was cut and Tuesday’s attendees milled about the gallery space, people could be seen transfixed by Banda’s images. One portrait shows a man as he holds and looks delicately into the eyes of a baby whose skin is a blank canvas against the man’s ink-covered body.

Another is a rendition of The Last Supper, where instead of wine, all the cholo apostles are partaking in Tecate beer while the center Jesus character drinks Bud Light.

The artwork documents the subjects seamlessly, from undertaking mundane tasks like walking a dog to a close-up portrait of a woman in full sad clown makeup admiring her gorgeously manicured fingernails. Throughout the event, a common theme of inclusivity and diversity were discussed among the attendees.

“The cultural center has been doing activities for the community in general but also we have had open doors to different artistic expressions,” said artist Eduardo Quintero, who is the assistant director of the Cultural Arts Center. “(If you are an artist), come and knock on the door, because ultimately, we believe that art makes you a better human being.” 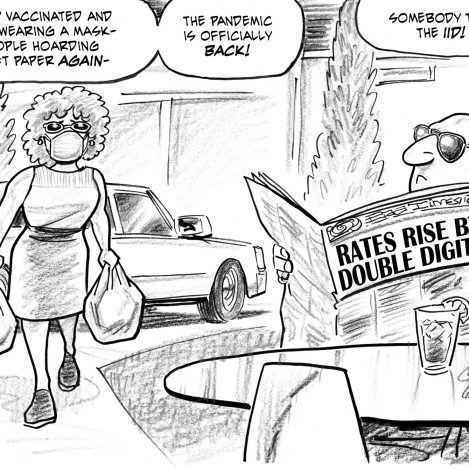