CALEXICO — The following reports were collected from the Calexico Police Department call logs from Oct. 4 through Oct. 9.

4:53 p.m.: Police responded to reports of two men with knives fighting in the middle of the street in the 500 block of East Fifth Street. An arriving officer witnessed one of the men, Eriberto Martinez, attack another man with a lettuce knife. Officers instructed Martinez to drop the knife, but he refused and walked away. After ignoring further commands, an officer deployed a taser against Martinez. The suspect continued to struggle and was hit with the taser a second time and then a third time when he attempted to retrieve his dropped knife. Martinez was arrested and continued to resist as he was placed in the back of a police cruiser. Police noted that Martinez appeared to be under the influence of a stimulant. The victim told police that Martinez attacked him for no apparent reason. Martinez was arrested on a count of assault with a deadly weapon and transported to Imperial County jail.

8:43 a.m.: Police counseled a youth who reportedly brought a knife with him to Blanche Charles Elementary School and brandished it while threatening other students. The student told police that he brought the knife to school to “feel cool” and did not intend to hurt anybody.

11:10 a.m.: Police were dispatched to Enrique Camarena Junior High School after somebody left a note in the girls’ restroom threatening to kill the principal.

12:08 p.m.: Police were dispatched to the vacant Fiesta Restaurant building on the 200 block of East Third Street after an anonymous caller reported vandalism in progress. Police arrived on the scene to find the front window broken and Brian Samid Blanco inside allegedly attempting to steal a bench. Blanco was arrested for burglary and vandalism and was later released due to Imperial County jail not taking non-violent offenders due to the COVID-19 pandemic.

5:20 p.m.: An officer patrolling the 100 block of Rockwood Avenue pulled over a black Saturn with expired tags. A search revealed the driver to be in possession of 3.4 grams of methamphetamine and a glass pipe. The individual was cited for possession of methamphetamine and for possession of drug paraphernalia and was later released on a promise to appear in court. A male subject riding in her passenger seat was released without charges after being detained briefly. The black Saturn was towed.

6:19 p.m.: Police were called to the GameStop store on Imperial Avenue after a man grabbed a Nintendo Switch Lite game console off the front counter, shoved it into his bag and walked out the front door without paying. Police were provided with video evidence of the incident, photos of the suspect and his social media handle.

7 p.m.: Police responded to reports of a fire in the 1000 block of Rockwood Avenue. A concerned citizen contacted police after spotting smoke coming from the rear of an abandoned residence. Personnel with the Calexico Fire Department extinguished the flames and told police that they believed the origin of the fire to be arson. Police were unable to locate any further witnesses or evidence.

7:42 p.m.: Police responded to reports of a Dumpster fire in the rear of the 7-Eleven store on Imperial Avenue. Officers found a small pile of clothes burning near the Dumpster and were able to put the fire out with a hose and a Styrofoam cup. Video surveillance footage revealed a subject walking away from the area of the fire, named as a person of interest by police. Calexico fire Capt. Shannon Mohamed said that he recognized the man, a Hispanic male in his 30s, as a spectator at other recent arson fires. The man is approximately 6 feet tall and 230 pounds and was late seen wearing a black shirt, blue jeans and a gray or light blue backpack.

8:13 p.m.: Police responded to reports of a brush fire along Highway 111. Officers found a 40-foot stretch of brush fully engulfed. Police interviewed a nearby homeless man who said the man who started the fire was a Hispanic male, approximately 25 years old and 5 feet 3 inches tall. The witness didn’t know what the suspect was wearing but said he didn’t have a backpack and left northbound. Police checked the area for the suspect but were not able to locate anybody fitting the description. Calexico fire personnel extinguished the flames and once again deemed the fire to have been caused by arson.

9:56 p.m.: Police responded to reports of two trash bins fully engulfed in flames in an alleyway in the 200 block of East Second Street. Calexico fire personnel arrived to put out the fire, which had spread to the walls and roof of a nearby building. Police were unable to locate any witnesses or evidence as to who started the fire.

11:06 p.m.: Police responded to a fire in an alleyway in the 100 block of Roosevelt Street. Officers found two black bags that were set on fire by an unknown suspect and had spread to the wooden slats of a nearby chain link fence.  Firefighters put out the flames and police took a report. 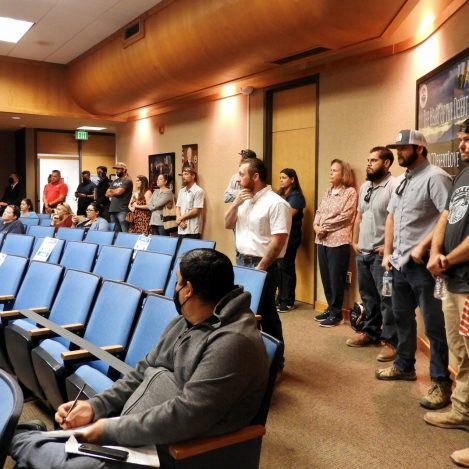