Despite being in jail on her conviction on four felony counts related to election fraud, an opinion from the state Attorney General’s Office regarding whether Annette Gonzalez-Buttner had a conflict in holding two elected offices was released recently. | IMPERIAL COUNTY JAIL AND COURTESY PHOTOS
Home
Regional News
In Regional News

EL CENTRO — The state Attorney General’s Office has found that a likely incompatibility of offices existed when former county Board of Education Trustee Annette Gonzalez-Buttner sought to simultaneously retain that seat and her seat on the local community college board.

Yet, the state agency characterized the Imperial County Office of Education’s previous application to legally seek Gonzalez-Buttner’s ouster from the county board a “moot point” because she was ultimately removed from both public bodies in June following her sentencing on multiple felony charges.

On Nov. 1, an opening brief in Gonzalez-Buttner’s appeal of her sentencing and conviction on four felony counts tied to election fraud and other related crimes is due to the Fourth District Court of Appeal, which granted her an extension on Oct. 1, so that she could file additional paperwork.

The opinion issued by AG’s Office on Sept. 24 came in response to ICOE’s December 2020 request to pursue a civil lawsuit, known as “quo warranto,” that sought Gonzalez-Buttner’s ouster from the Board of Education for holding two publicly-elected offices that ICOE believed were incompatible.

Though the state agency did not grant ICOE approval to pursue the lawsuit because of Gonzalez-Buttner’s previous removal from both public offices, its opinion did conclude that her tenure on the two elected seats presented potential “significant clashes of duties or loyalties.”

The AG’s Office’s finding represents its first formal ruling for a quo warranto application involving the elected offices of a county education board and a community college board. As such, the opinion should prove helpful should a similar issue arise, Finnell said.

“The Attorney General’s analysis of incompatibility of these offices will be beneficial to all County Offices of Education across the state should this issue present itself again,” Finnell said in a written statement on Monday, Oct. 4.

In arriving at its determination, the AG’s Office reviewed the responsibilities of an elected trustee of both the county education board and local community college board. In the present case, the state agency found some areas that could present potential issues.

Its opinion cited the fact that both boards may approve the purchase, leasing, and disposal of property within their overlapping jurisdictions. Another potential “clash of interests” included the possibility that the two boards could enter into agreements with each other.

Similarly, because members of the Imperial County Board of Education serve as the Imperial County Committee on School District Organization, there arises the potential for conflicted loyalties, since school district organization representatives can have authority over “the establishment, rearrangement, or abolishment of trustee areas in any community college district or increase or decrease the number of members of the governing board.”

“In sum, we find that several potentially significant clashes of duties or loyalties might exist between the two offices at issue here, and therefore conclude that a substantial question of fact or law regarding incompatibility of offices exists,” stated the opinion authored by state Attorney General Rob Bonta and Deputy AG Lawrence M. Daniels.

Currently, Gonzalez-Buttner is serving a three-year jail sentence after she was remanded to the custody of the county Sheriff’s Office by county Superior Court Judge Christopher Plourd following her sentencing hearing on June 3.

A jury found that Gonzalez-Buttner moved to Santa Clara in 2014 and had established her permanent residence, or domicile, outside of Calexico, the area she was elected to represent on the county Board of Education.

She is appealing both her conviction and sentencing. On Oct. 1, that appeal with the state’s Fourth District Court of Appeal was granted an extension to augment its appellate court filings with additional court reporter transcripts. Gonzalez-Buttner’s opening brief, which will argue the merits of her appeal, is due Nov. 1, according to the Fourth District Court of Appeal website.

She is also appealing a restitution order that Plourd imposed during a restitution hearing on Sept. 2 in the local Superior Court. During the hearing, Plourd ordered Gonzalez-Buttner to pay a total of about $164,000, plus 10 percent interest.

The monies, of which some $124,000 will go toward the Imperial County Schools Voluntary Employees Benefits Association, and about $39,800 to ICOE, represent medical benefit expenses paid on her behalf, local court records stated.

Both of her former trustee seats have since been filled by provisional appointments by members of each respective board. 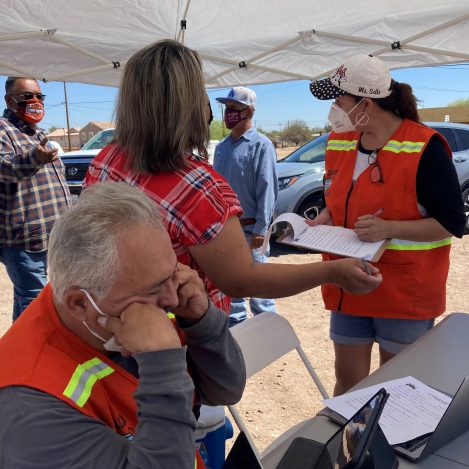