Johanna Trenerry of Happy Valley holds a photograph of herself with her husband, Art Trenerry, who died last year of COVID-19 while staying at Windsor Redding Care Center. His family members, including Johanna, are named as plaintiffs in a lawsuit against the facility. Photo by Matt Bates for CalMatters
Home
California
In CaliforniaCOVID-19

A lawsuit describes nursing home magnate Shlomo Rechnitz and his companies as the “unlicensed owner-operator” of a troubled Redding facility.

The state’s largest nursing home owner, Shlomo Rechnitz, is facing a lawsuit alleging that one of his homes is responsible for the COVID-related deaths of some 24 elderly and dependent residents.

The catch? Five years ago, the state denied Rechnitz and his companies a license to operate the place, the state’s own records show.

The case brought against Rechnitz, his companies and the home itself, Windsor Redding Care Center, is yet another footnote in an ongoing nursing home licensing saga documented in a CalMatters investigation last spring.

That investigation revealed an opaque and confusing state licensing process frequently marred by indecision and delays. CalMatters found that the California Department of Public Health has allowed Rechnitz to operate many skilled nursing facilities for years through a web of companies as their license applications languish in “pending” status — or are outright denied.

(EDITOR’S NOTE: One of Rechnitz’s main companies, Brius, owns Imperial Heights Healthcare and Wellness Centre in Brawley, which was the site of a major COVID outbreak in 2020 and has had a track record of major state health violations.)

The lawsuit — which includes a total of 46 plaintiffs, including 14 deceased residents and 32 family members — specifically calls out Rechnitz and his management companies as being an “unlicensed owner-operator” of the skilled nursing facility. The plaintiffs also are suing the previous owners, whose names and companies remain on the license.

Family members of residents who died as a result of a COVID-19 outbreak last fall are suing the facility for elder neglect and abuse, alleging that Windsor Redding forced employees to come into work while symptomatic with the virus, triggering the outbreak.

The complaint further alleges that dozens of residents who fell ill were left isolated and neglected due to “extreme understaffing.” One nurse told state inspectors that she alone had to pass out medications to 27 COVID-positive patients, meaning the medications were often late, according to an Oct. 21, 2020, inspection report, also cited in the lawsuit. Another nurse told them that nurses on the COVID unit, or “Red Zone,” were “stressed, overloaded and tapped out” and unable to take breaks, the report said.

The complaint lists 142 violations substantiated by investigators including neglect, abuse, staffing and infection control issues between January 2018 and June 2021. In November 2020, the federal government fined the facility $152,000 as a result of the inspections.

“The fact that this facility had its license application denied and yet they continued to operate during this pandemic, which unfortunately led to an alleged 24 deaths from COVID, highlights the urgent need for the state to fix its broken licensing system,” he said.

On Tuesday, the Assembly Health Committee will hold an informational hearing to discuss problems with nursing home oversight and licensing in the state.

They know this operator is running the facility, and they’re not doing anything about it. In a sense, the state could be co-defendants in this case.”

Rechnitz, a Los Angeles entrepreneur, was in his mid-30s when he began buying nursing homes 15 years ago. He and his companies, including Brius Healthcare, have acquired at least 81 facilities around California, making him the state’s biggest for-profit nursing home owner.

Rechnitz and his companies operate more than a quarter of those facilities despite the fact that the California Department of Public Health has not approved — or has outright rejected — their licensing applications, according to state records. In the case of five “Windsor” facilities, including Windsor Redding, Rechnitz and his companies continue to run them after the state’s license denial. The previous owners’ companies, affiliated with the Windsor brand, are still listed in state records as the official license-holders.

Mark Johnson, an attorney who represents Rechnitz and Brius, said in an emailed statement that he could not comment on pending litigation except to say that: “The facility vehemently disagrees with the allegations and it intends to defend the action vigorously.”

Johnson has previously declined to answer detailed questions about the licensing issues. But he has expressed frustration in emailed statements to CalMatters about the state’s inconsistent approach to Brius homes — approving some, denying others, and leaving still others stuck in pending status.

The Death of Art Trenerry

Art Trenerry arrived at Windsor Redding on Aug. 6, 2020, after suffering a stroke, his family and attorney say. Several of Trenerry’s family members are named as plaintiffs in the lawsuit.

Visitors weren’t allowed inside at the time, they told CalMatters. Instead, Johanna, his wife of 60 years, and their children would visit outside the window, said one of their daughters, Nancy Hearden, in an interview. Sometimes the facility would wheel the wrong person out, she said.

Johanna said she would ask nurses to hold the phone to her 82-year-old husband’s ear so she could tell him “Hi Dad, I love you.”

His daughters called twice a day to check on him, growing concerned by their perception that “things aren’t right,” Hearden said. They began looking to move him to a new facility, or to bring him home, she said.

“Just as we were going to get him out of there,” said Hearden, “he got COVID.”

Hearden said she called in a complaint about the care her father received to Shasta County’s public health department on April 20, 2021. “Their response to me was, ‘they’re complying now,’” she said.

Hearden said she had not known who owned the facility when her father arrived there. The state denied Rechnitz licenses to operate Windsor Redding and four other facilities in July 2016, citing the poor track records of many facilities “owned, managed, or operated, either directly or indirectly, by the applicant,” according to 22-page denial letters addressed to Rechnitz.

Two departments within state government record Rechnitz’ relationship to the Redding facility differently. Rechnitz is listed as the owner of Windsor Redding in cost reports filed with the Office of Statewide Health Planning and Development in 2020. But his name is not on the California Department of Public Health’s consumer website, Cal Health Find, which identifies the facility’s owner/operator as Lee Samson, Lawrence Feigen and two limited liability companies with the Windsor brand. Windsor still operates nursing homes in California and Arizona, according to its website.

The lawsuit, filed last month in Shasta County Superior Court, also alleges that Rechnitz and his “management operating companies” circumvented the state’s denial by creating a “joint venture” with Samson and a limited liability company affiliated with S&F Management.

S&F is a West Hollywood-based company that provides “professional consulting services to Windsor facilities,” Todd Andrews, senior vice president of S&F Management Co., told CalMatters in March. When asked about the lawsuit last week, Andrews said that his company and its president and CEO, Lee Samson — also named as defendants in the complaint — have had no day-to-day involvement with the facility. He said the state “has not transferred the license in over seven years,” despite repeated appeals, so Windsor remains the licensee.

A spokesperson for the California Department of Public Health declined to comment on the case because it is pending litigation.

Assemblymember Muratsuchi authored a bill earlier this year that would forbid the use of management agreements to “circumvent state licensure requirements” and would require owners and operators to get approval from the California Department of Public Health before acquiring, operating or managing a nursing home.

The bill stalled in the Assembly Health Committee in the spring. But the committee’s chair, Assemblymember Jim Wood, a Santa Rosa Democrat, said he was so committed to fixing these issues that he planned to take the unusual step of putting his name on it as a joint author next year. Wood will chair Tuesday’s legislative hearing on nursing home licensing, inspections and quality of care – with representatives of the Department of Public Health expected to appear.

Long before COVID-19, Windsor Redding had a history of care problems. Given that, the complaint says, “it was foreseeable that Defendants would continue to neglect and harm more residents during the pandemic.”

In August 2020, state inspectors cited the facility for admitting patients who were negative for COVID-19 into rooms with residents who were positive for the virus, or had been exposed.

By the next month, the facility had an outbreak — 60 of the 83 residents contracted the virus, and “approximately 24” passed away from complications related to COVID-19, the complaint states. (The state identified 23 COVID-related deaths at the home last fall and winter.)

In September 2020, the California Department of Public Health conducted an inspection of the facility and declared an “immediate jeopardy,” the level of deficiency reserved for the most egregious incidents in nursing homes that could cause serious injury or death.

Among the inspection’s findings: the facility had punitive sick leave policies. Two staff members reported being told to come into work despite having symptoms of COVID-19, including “body aches, chills, sweats and respiratory symptoms” for one and “loss of taste, lethargy, and cough” for the other, according to a Sept. 25, 2020, inspection report. Both eventually tested positive.

In that same report, the investigators also reported that staff were reusing personal protective equipment. One nurse was found wearing her N-95 mask around her chin. When asked if staff were to wear their masks over their noses and mouths while at the nurse’s desk, the inspection report said, she responded: “I don’t know.”

The complaint alleges, further, that the defendants have a “general business practice” of understaffing the facility.

“It makes dying alone even lonelier,” said Wendy York, a Sacramento attorney specializing in nursing home abuse whose firm is among three representing the families.  “My heart gets heavy when I think of them in this unit, in this environment.”

Tony Chicotel, staff attorney for California Advocates for Nursing Home Reform, said he holds the state partly to account for the outbreak.

“They know this operator is running the facility, and they’re not doing anything about it,” he said. “In a sense, the state could be co-defendants in this case.”

The last time Johanna Trenerry was able to see her husband, Art, was the night of Sept. 25, 2020, after he tested positive for COVID. She and some of her children were allotted 15 minutes each to see him. During those minutes, Trenerry sat next to her husband, holding his hand. Right before she left, she raised her face shield and kissed him. He died a week and a half later.

Johanna Trenerry is Catholic, and believes that Art is with God now, and that they’re both keeping an eye on her. Ever since the couple met as 16-year-olds on a blind date, Art had taken care of her, always supporting her “crazy ideas.” She told him she wanted a big family, a farm and a two-story house. “Ok, hon, whatever you want, you can have,” he said.

He worked as a stationary engineer, doing maintenance at the local hospital in Redding, and served as a volunteer firefighter and on the local water board. They raised eight children together on a 14-acre farm in Happy Valley, a small community outside town. His family describes him as quiet, but funny, always ready to help a neighbor and so devoted to his grandchildren that he built them a miniature railroad track on the property.

When a friend down the street said that her own husband was unwell, Johanna didn’t mince words.

(This story by Jocelyn Wiener first appeared in CalMatters and is made available as part of the CalMatters Network.) 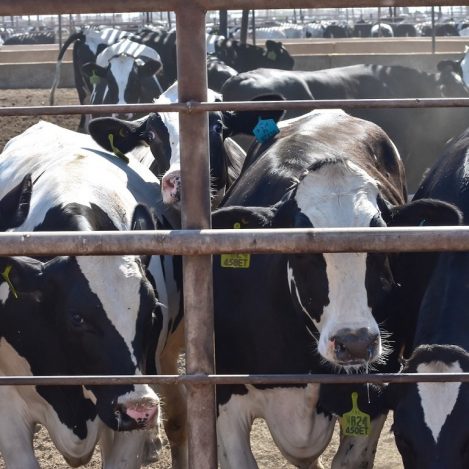