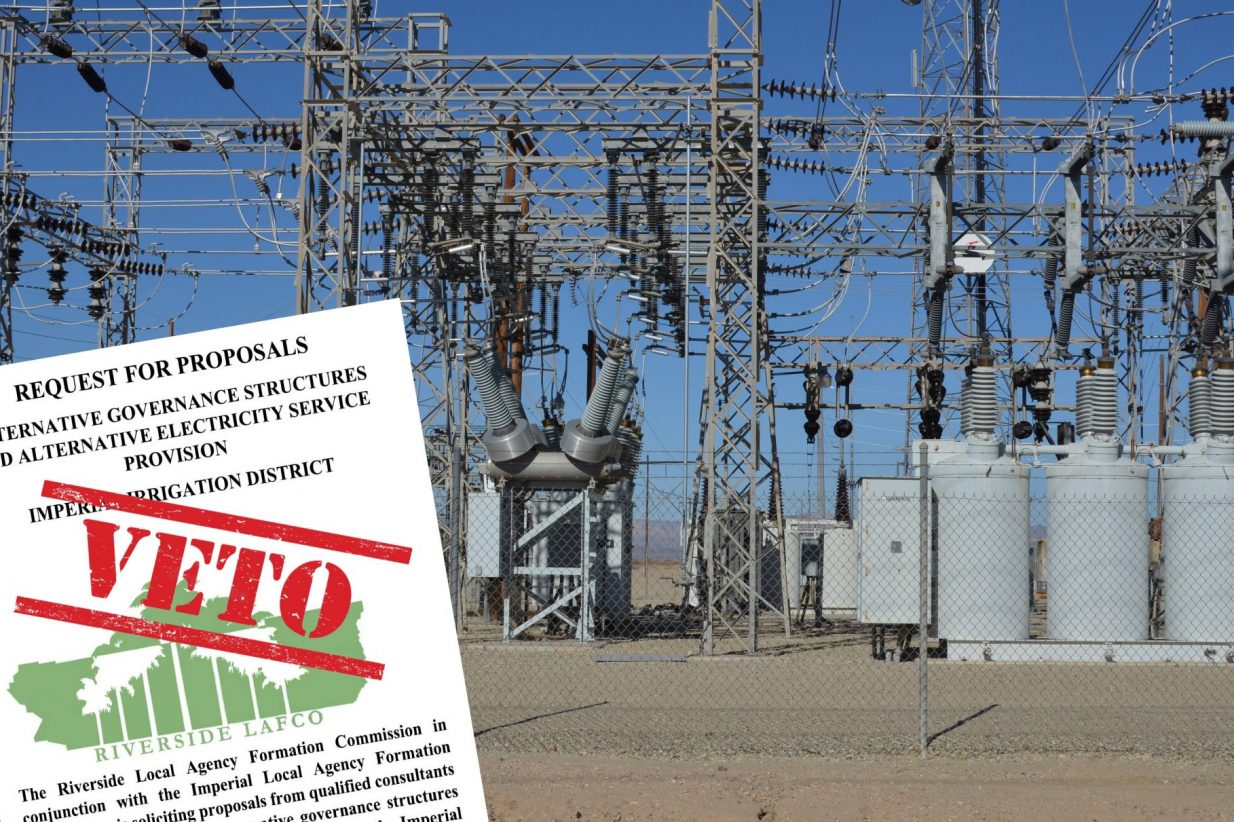 Gov. Gavin Newsom has vetoed a controversial Assembly bill that has been fought tooth and nail by Imperial County politicians and stakeholders since its introduction, a bill borne out of an attempt to force outsiders onto the Imperial Irrigation District board.

In the watered-down version that made it to Newsom’s desk, Assembly member Chad Mayes’ Assembly Bill 1021 mandated that two local government agencies conduct an analysis of alternative governance structures and alternative electricity services provided by the Imperial Irrigation District.

The study was supposed to answer two major questions: Should the IID add one or more representatives of its Riverside County energy customers to its board of directors; and what options are available for providing electricity should the IID terminate energy service in Riverside or Imperial counties.

Those questions might not get answered in the foreseeable future. Newsom’s veto eliminated clear objectives and a deadline for the study, leaving just a small line-item allocation in the state budget for “a study” on the IID, without any further instructions or deadlines.

It also deals a major blow to Mayes’ (I-Rancho Mirage) latest effort to seat a representative from the IID’s energy service area in Coachella Valley on the IID Board of Directors, which has now been stopped through two iterations — the early draft of AB 1021 and the stalled AB 854.

In a brief, plainly worded veto message, Newsom cited two major reasons for vetoing AB 1021: the short timeline set forth in the bill to complete the study, and the $500,000 allocation from the General Fund to finance such a study.

“In reading the plain language of the veto message, it’s clear the Governor supports our effort to provide proportional representation. However, the timeline proscribed in AB 1021 was too short,” Mayes said in a written statement.

“During our conversation with the Riverside and Imperial County (Local Agency Formation Commissions), they felt confident in their ability to deliver the study within the time frame put forth by the Legislature. While we believed the timeline in AB1021 could have been met by June of next year, we are thankful the Administration agrees the status quo at IID is unworkable and has committed to work with us in the coming legislative session to provide voting rights for the disenfranchised in Riverside and Imperial Counties,” Mayes’ statement continued.

Newsom’s statement did not attempt to characterize the status quo at IID.

The veto represents a victory for the IID, which deployed considerable resources against the bill.

“We said all along that we wanted a local solution, and that the state Legislature is not the place for it. The best place for it is on the ground with local stakeholders,” IID Division 2 Director and board Vice President JB Hamby said. “We developed the Coachella Valley Energy Commission as the local mutually beneficial, reasonable and effective alternative to AB 1021.”

An initial draft of the study by the two counties’ LAFCOs would have been due in February 2022, and a final draft published by July 1, 2022. LAFCOs oversee local governmental boundary changes and special districts.

The LAFCOs for Riverside and Imperial County solicited proposals assuming that that AB 1021 would get signed, said Jurg Hueberger, executive director for Imperial County LAFCO, on Monday, Oct. 4.

“This bill was vetoed because of the unrealistic demands placed on LAFCO. This bill handcuffed LAFCO to do a biased study in regard to providing proportionate representation in the bill, which is completely unheard of,” IID Division 1 Director Alex Cardenas said. “My understanding is that the LAFCO study goes back to square one, which presents an opportunity to scope a study that represents the true needs of our ratepayers in an objective manner with community input.”

Mayes set off alarms in the IID when he introduced AB 1021 in February, the second attempt at placing Riverside County on the IID board.

An early draft would have expanded the board from five to eight. The three additional directors would be appointed by Riverside County political and community leaders. They would not have any voting rights.

Mayes argued that the IID’s current board does not give its customers living outside its water service area a say in how the utility operated. About 60 percent of the IID’s rate base is in Coachella Valley, and the power operation brings in more than half of the district’s revenues.

AB 1021 was gutted as it made its way through the Legislature, and its most contentious provisions were dropped.

But Mayes vowed in an interview with the Calexico Chronicle that he would not let up until a Coachella Valley representative with full voting rights sat on the IID board.

IID officials saw the initial versions of the bill as a possible opening for outside interests to seize control of the Imperial Valley’s lifeblood, its water, and the result was a vigorous campaign against the bill, mostly by Hamby, who formulated the Coachella Valley Energy Commission and went around southeastern Riverside County to sell it.

Throughout, both sides traded barbs publicly, as IID officials characterized AB 1021 as a water grab and threatened to pull out of Coachella Valley as a service provider and to sue in federal court.

“There’s a game of chicken being played and it’s not necessary. We’re trying to address everybody’s concerns. If it continues to move forward, we’re prepared to cut off our nose to spite our face, that’s how serious we are,” Hamby said to the Calexico Chronicle at the time.

IID rushed to establish the Coachella committee to give area ratepayers a voice at the table. Mayes turned up the heat on the IID with a number of amendments.

But, behind the scenes, both sides were in close contact.

The CVEC is intended to give the IID’s Riverside County energy ratepayers a seat at the table with IID directors without opening the board to people outside the Imperial Valley. The IID’s political boundaries encompass its water service area.

Six months after the bill was introduced, the requirement for an additional board member was quietly dropped, rendering the bill comparatively weakened and expected by many observers to be approved.

But the IID managed to keep an outsider off its board of directors, and Mayes forced the IID to give Coachella Valley ratepayers a seat at the table.

The bill, as it arrived on Newsom’s desk, mostly encompassed the $500,000 for a joint Imperial County-Riverside County LAFCO study of energy future issues in Riverside County, including options for continued energy service in the area IID serves in Coachella Valley. That study would need to be published by July 1, 2022.

Hamby and others in the IID and on the board chalked up the exclusion of so many of Mayes’ biting amendments as a win. Cardenas urged caution.

Indeed, the LAFCO study in itself would not have been binding. Riverside County’s LAFCO could adopt the study while Imperial County’s LAFCO declines to do so, or vice versa.

But, as Cardenas feared, the study could have been the basis for another attempt to force outside representation onto the IID board. After all, AB 1021 itself was Mayes’ second attempt to interject Riverside County membership onto the district Board of Directors.

Two years ago, Mayes’ first attempt to add members to board failed. In 2019, AB 854 proposed six additional voting Coachella Valley representatives to the board, which would have given the majority to Riverside County. That effort did not get enough support to move out of the Assembly’s Rules Committee and onto the Assembly floor.

“We are waiting to see how the study and the Coachella Valley (Energy) Commission progresses before we decide what legislative action might be needed next year,” Assembly member Mayes said in a written statement to the Calexico Chronicle on Oct. 5, before Newsom vetoed the bill.

(This story was updated with additional information at noon Wednesday, Oct. 6.) 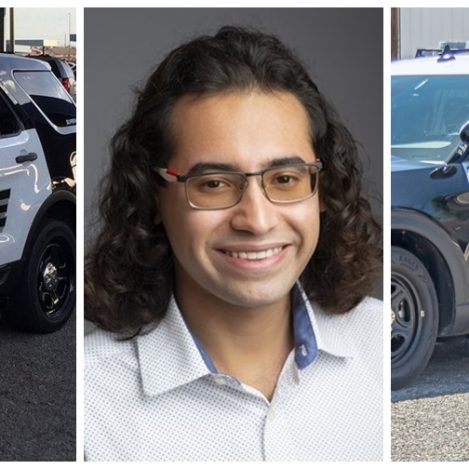