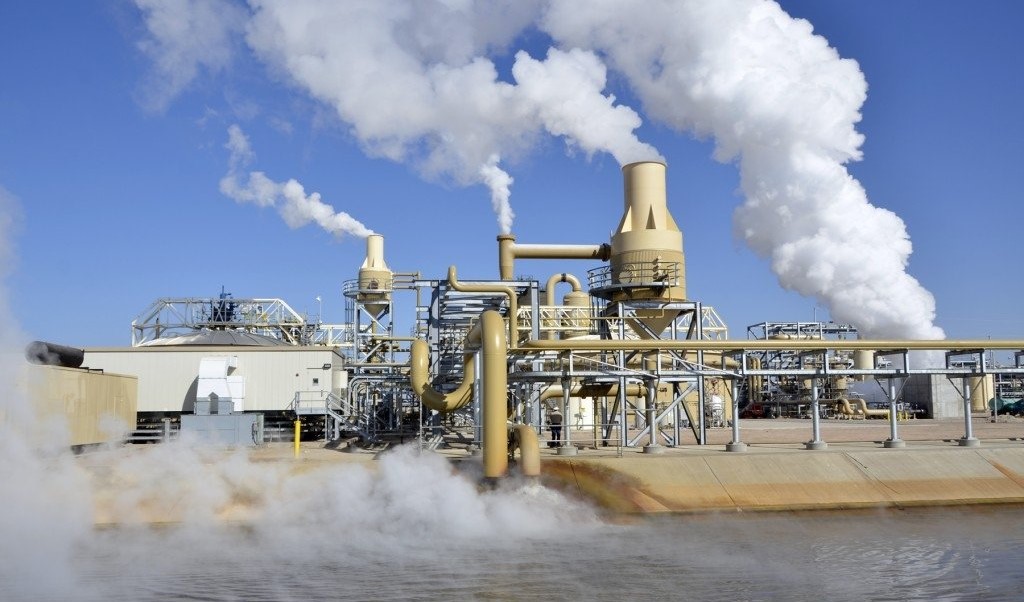 EnergySource’s Hudson Ranch 1 geothermal project at 409 W. McDonald Road near the Salton Sea is shown, where a lithium-recovery facility is also being developed. A group of Imperial County government officials and stakeholders toured the plant on Friday, Oct. 1. | ENERGYSOURCE PHOTO
In BusinessRegional News

NILAND — As a native of Niland and Calipatria City Council member, Maria Nava-Froelich is well aware of the challenges the Northend communities face in revitalizing their once-bustling economies.

Yet, with all the recent talk about how the lithium industry is expected to benefit the area, Nava-Froelich is expressing some cautious hope that better days are ahead for the struggling communities.

Some of that hope was on display during Nava-Froelich’s recent tour of the EnergySource geothermal power plant southwest of Niland, which is developing a separate facility onsite that will extract lithium from the brine that is drawn from the earth during geothermal energy production.

“We don’t want to place all of our eggs in one basket, but I think this is going to make a difference,” Nava Froelich said about the planned lithium facility and other similarly proposed local projects.

Nava-Froelich is not alone in expressing such hope. For years, county officials have been touting the Salton Sea Known Geothermal Resource Area as a prime location for geothermal development, as well as a promising economic engine for the Valley.

Now, with policies at the state and federal level providing added incentives for future geothermal development, stakeholders are anticipating an expansion of that industry.

Additionally, the domestic extraction of lithium has taken on renewed focus as of late, with the increased global demand for the mineral that is used extensively to produce rechargeable batteries and for electric vehicles.

The resultant development, officials said, would be an economic boon for the county and especially for the communities closest to the Salton Sea Known Geothermal Resource Area like Calipatria and Niland.

“The word game changer is used very regularly when people talk about lithium and the impact that it could have here in Imperial County, and I don’t think that is a stretch,” said Vincent Signorotti, EnergySource vice president of resources and real estate assets. “Hopefully in a couple years we can pat ourselves on the back.”

The company’s plans call for a $400 million mineral-extraction facility to be operated as a pilot project by a separate business entity, EnergySource Minerals.

Once operational, it will employ about 60 full-time employees, Signorotti said during a tour of the geothermal plant he hosted for local stakeholders and the media on Friday, Oct. 1.

Its construction is expected to get underway in the first quarter of 2022, create hundreds of jobs and be completed in about 18 to 20 months. By 2024, the facility is expected to produce about 20 metric tons of battery-grade lithium hydroxide annually, Signorotti said.

About six years ago, EnergySource had partnered with a separate start-up company that sought to extract minerals from the geothermal brine produced at the EnergySource facility located at 409 W. McDonald Road.

When that project failed to come to fruition, EnergySource decided to develop its own mineral recovery technology, which can extract lithium, as well as manganese and zinc, from the brine.

Because of the fluctuating commodity prices of lithium, the planned facility is not expected to enter into any long-term contract with a purchaser. Nonetheless, Signorotti said the company anticipates having a principal “offtaker” for the majority of the lithium it recovers, as well as the manganese.

“Lithium is what is sexy but manganese and zinc is also something that has value,” he said.

And though EnergySource does not have any current plans to further process the lithium it extracts locally into refined products, it is eyeing the possibility of doing so.

“We hope to be a major developer of lithium and develop the entire supply chain domestically,” Signorotti said.      “And we’d love for all of that to happen in Imperial County.”

A Combination of Favorable Circumstances

Currently, lithium production remains fairly limited in the United States and what is extracted domestically is typically shipped to China for the manufacture of batteries, said county Supervisor Ryan Kelley, whose District 4 includes the Salton Sea and its outlying Northend communities.

But with state and federal policies regarding renewable energy now favoring geothermal energy more so than before, Kelley said the industry is expected to expand, boosting domestic lithium extraction along with it.

One such positive development was the California Public Utility Commission’s June 24 procurement order of 11,500 megawatts of energy, which required that 1,000 megawatts of that order be from new geothermal resources by 2026.

“We’ve been advocating for geothermal recognition as a renewable for about eight years and finally we’ve got some consideration,” Kelley said while travelling in a public transit bus that transported him and others from El Centro to the EnergySource facility near Niland.

Other community members that took part of the tour of EnergySource’s geothermal plant included Calipatria City Manager Rom Medina and Calipatria Mayor Pro Tem Javier Amezcua, representatives of the International Brotherhood of Electrical Workers Local 569, a member of the Torres-Martinez Desert Cahuilla Indians and the Salton Sea Authority, as well as county officials.

Besides the EnergySource Minerals pilot project, CalEnergy, which operates 10 geothermal plants around the Salton Sea area, is also in the process of developing a pilot project to recover lithium from the brine it extracts from the earth at one of its facilities.

Additionally, the Australian company, Controlled Thermal Resources, is in the process of submitting its plan for a geothermal energy and lithium extraction plant to the county, Kelley said.

Controlled Thermal Resources is the company that has made trade headlines in the last several months, inking long-term deals with automakers General Motors and Stellantis to supply their electric vehicle fleets with battery-grade lithium.

Kelley said he is hopeful that future development is not limited to just geothermal and mineral-extraction projects but include ancillary operations that further process lithium. The county Board of Supervisors put that desire into motion when it recently hired a consultant to help realize those vertically integrated goals.

The kinds of ancillary operations the county envisions include the manufacture of cathodes, which are a battery component, as well as the recycling of old batteries to recover their lithium.

“This is producing a strategic mineral for United States’ consumption in the United States,” Kelley said. “Our goal is to see Lithium Valley realized to have the mineral developed here and then also refined to a point where we have cathodes, battery recycling and other manufacturing.”

The Lithium Valley that Kelley referenced is, of course, Imperial Valley. He also serves as vice chair of the 14-member Lithium Valley Commission, a creation of Assembly Bill 1657, introduced by Assembly member Eduardo Garcia, D-Coachella.

As part of its effort to entice those ancillary businesses, Kelley said the county recently sent letters to more than a dozen battery manufacturers in Southern California requesting that they look at what Imperial County now has to offer the industry. To his knowledge, there is currently no manufacturer of cathodes in the U.S.

County officials are also working with its elected representatives at the state and federal level, and the state governor’s office, to try to entice those ancillary businesses to the county, he said.

The current economic and political climate that favors geothermal energy and mineral recovery is vastly different from the conditions that existed when Simbol Materials LLC had operated its mineral extraction plant in the county, Kelley said.

In the absence of such a supportive climate, Simbol eventually closed its research and design plant in 2015.

“(The government) wasn’t paying attention to the need to secure a natural resource for strategic goals and now they are,” Kelley said.