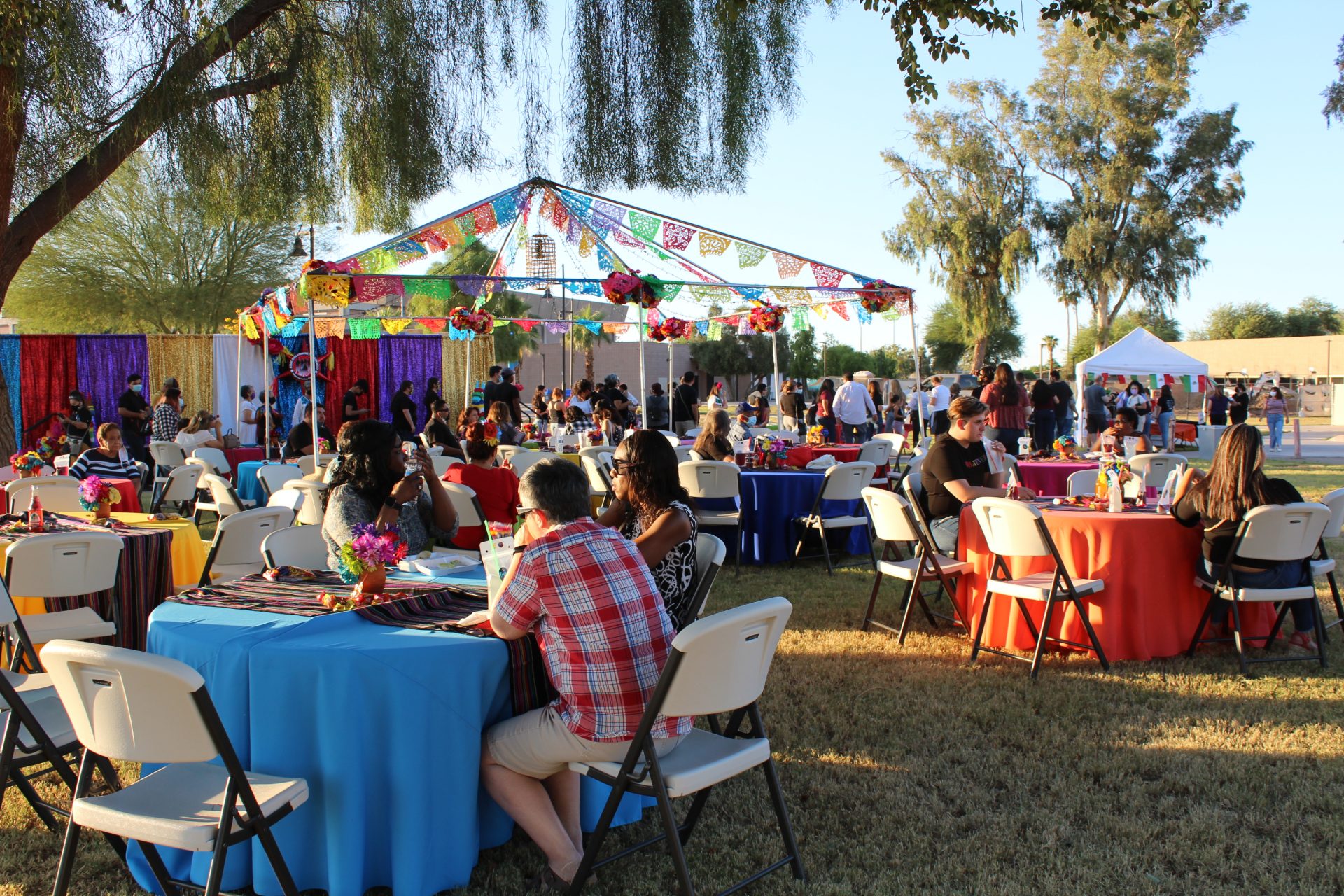 Community, family, and students gathered on the lawn at Imperial Valley College for the campus' Hispanic Heritage Month Celebration on Thursday evening, Sept. 30. National Hispanic Heritage Month runs from Sept. 15 to Oct. 15 and celebrates the history, achievements, and contributions of Hispanic Americans whose ancestors came from Spain, Mexico, the Caribbean, and Central and South America. | KATHERINE RAMOS PHOTO
In EducationRegional News

IMPERIAL — Mariachi Mixteco serenaded the crowd as the sun set on the last day of September, giving way to a wrestling ring lit up for lucha libre run by locally owned Venue Wrestling Entertainment.

Food from the 2019 Taco Throwdown champion, “Taco King” Rafael Montaño, was served with a shout alongside paletas and drinks, and families and friends took their turns playing Loteria for candy and bragging rights.

The lawn in front Imperial Valley College’s student affairs office was awash in color and alive with music on Thursday evening, Sept. 30, as the campus and community celebrated National Hispanic Heritage Month with a big fiesta organized by IVC’s Associated Student Government.

“Every culture needs to be represented in some kind of way and throwing an event like this for every culture is good, especially for this one, because of the majority,” said IVC freshman Victoria Ochoa, who helped take charge of the Loteria tables, adding she was happy to see something being enjoyed by others that she would play with her own family when she was growing up.

National Hispanic Heritage Month runs from Sept. 15 to Oct. 15 and celebrates the history, achievements, and contributions of Hispanic Americans whose ancestors came from Spain, Mexico, the Caribbean, and Central and South America.

ASG President Javier Melara said this annual event was meant to celebrate culture and bring the community together with the students.

To Melara, Thursday’s event reminded him of his roots growing up in a Hispanic household in Calexico, and Melara added that helps remind people of their own roots and introduces others to Hispanic culture.

“We wanted to hold something so that people will know they are being recognized and they still take pride in who they are and where they came from,” he said. “Sometimes people tend to forget where they come from and their roots, and this event just helps the whole community remember who they are.”

Second-year student and ASG member Laila Jaime echoed Melara’s sentiments that the celebration helped her to get in touch with her roots and made her feel more connected with her culture.

“I don’t really celebrate it that much at home; we don’t do the traditional Hispanic things,” Jaime said. “It’s good to embrace it this way and makes me feel more connected to it and feel pride in being Hispanic.”

More than 200 IVC students and members of the public were present at the event, many of whom said they felt a sense of connection with their roots.

“It’s very inclusive to everyone who might feel this is not their country,” student Ivanna Escalante said. “I feel it’s great to have events like this that represent where we are from.”

“This is really nice, especially since we are a border town and it’s a way to show the community we can come together,” yet another, Janette Gallegos, said.

IVC’s Student Health Center also offered COVID-19 vaccines to anyone who wanted to get them, courtesy of the office of Dr. Tien Vo. IVC students who were vaccinated during the Hispanic heritage event received a $50 gift card incentive for doing so.

Dr. Henry Covarrubias, interim IVC vice president of student services and equity, said the celebration is important for IVC, whose student population is 97 percent Hispanic, to showcase the school as well as provide for the needs of its community.

“It reaffirms our deep commitment to our community, students, faculty, administration, but more importantly to our community members,” Covarrubias said, “so having this type of event is a way for us to show our gratitude and allow everyone on and off campus to join us.”

This was the first large gathering of the community on IVC’s campus in more than year, James Dalske, IVC dean of student affairs and enrollment, said.

“This is one of the events we do to help build a flourishing, thriving community for our students and our Imperial Valley community,” Dalske said.

IVC is one of the top community colleges nationally in Hispanic, Latinx, and Chicano enrollment, according to Covarrubias. It is one of the 569 institutions nationally recognized as a designated Hispanic-Serving Institution (HSI), an institute with at least 25 percent Hispanic students in enrollment.