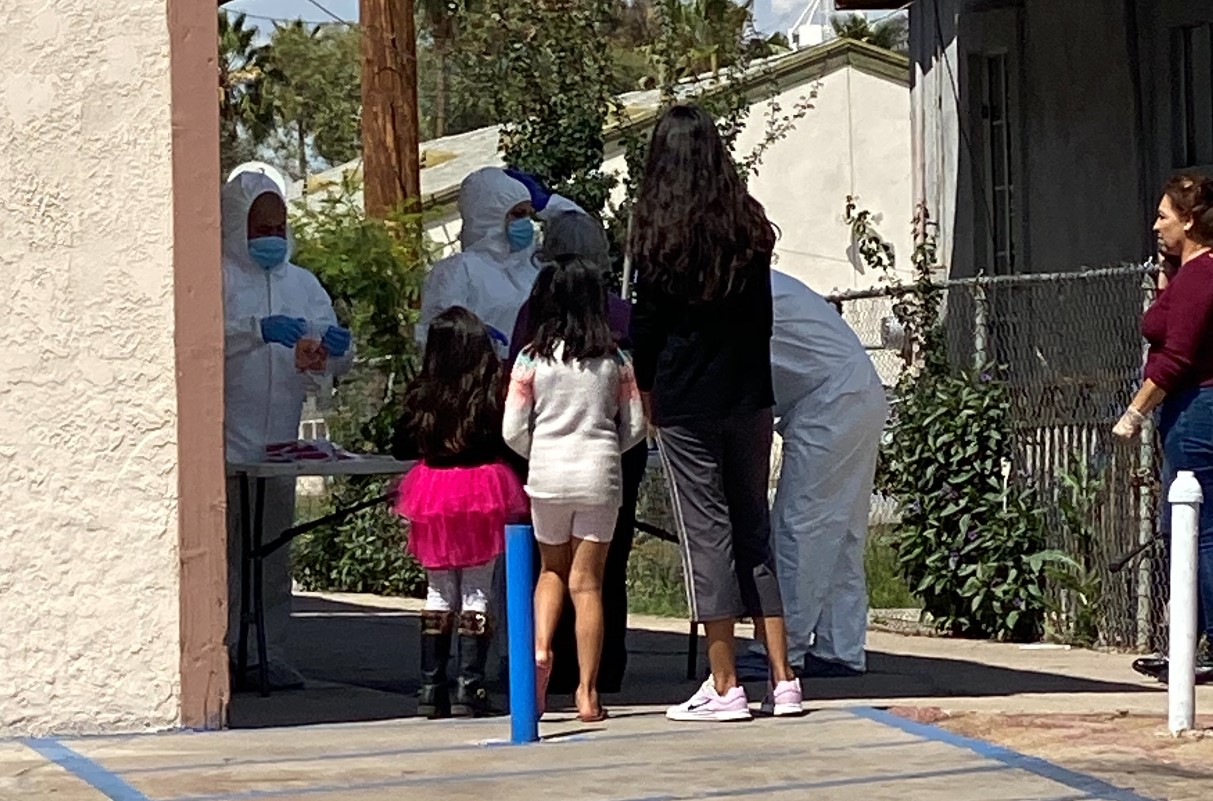 Calexico police released this cell phone image of several individuals dressed in personal protective equipment claiming to be offering COVID testing outside a senior apartment complex in the city on April 16, 2020. Believed to be an insurance scam or identity theft ring, police in Calexico and other areas of the county were actively investigating reports at the time. It’s unclear whether this is related to the recent guilty plea and probation time given to two women operating a fraudulent testing scam in El Centro and Calexico. | PHOTO COURTESY OF CALEXICO POLICE DEPARTMENT
Home
COVID-19
In COVID-19Public SafetyRegional News

EL CENTRO — Two local clinic operators were recently ordered to serve three years of probation and pay about $14,000 each in restitution after pleading guilty to conspiring to perform fake COVID-19 tests on Medicare beneficiaries living at senior apartment complexes in El Centro and Calexico.

The pair, Roselia Kubeck and Rosario Gonzalez, both of Calexico, had been operating Specialty Health Center LLC in El Centro since March 2020 and had submitted about $74,000 in fraudulent claims for which Medicare paid about $24,000.

The scheme was part of some $1.4 billion in alleged healthcare fraud losses that the U.S. Attorney’s Office in San Diego announced were part of a strategically coordinated, recent six-week federal law enforcement action.

The enforcement action resulted in charges against 138 defendants, including 42 doctors, nurses, and other licensed medical professionals across the nation.

Locally, Kubeck and Gonzalez were facing a misdemeanor charge of conspiring to make false statements knowingly and willfully in an application for payment under a federal healthcare program.

A person who answered the phone for Specialty Health Center at 1073 Ross Ave., Suite D, just west of Bucklin Park, on Wednesday, Sept. 12, confirmed that both Kubeck and Gonzalez remain employed at the site but declined to comment further.

The “shingle” on the clinic lists it as an office for Dr. Harry Lifschutz, a general thoracic and vascular surgeon who had offices listed in Indio and Calexico.

It’s unclear if the matters are related, but in April 2020, Imperial County law enforcement officials and the Calexico Police Department were looking into reports of a fraudulent COVID-testing scam at senior apartment complexes being performed for a doctor from Indio.

Although Lifschutz’s California medical license is valid, he was placed on four years probation after he was accused of gross negligence, repeated negligent acts and failure to maintain adequate medical records, according to a story in the Desert Sun from September 2019.

Lifschutz has been barred from performing any vascular procedures under anesthesia or conscious sedation through August 2023, according to the state medical board. The state said he made no admissions and that his accepting the settlement “is not an admission of guilt,” according to the Desert Sun.

According to the state, Lifschutz completed a prior probation in 2011, the Desert Sun reported.

For Kubeck and Gonzalez, they “completed requisition forms for Medicare patients that contained inaccurate diagnoses, and transmitted these to laboratories, knowing and intending that the laboratories which performed the tests would submit inaccurate and medically unnecessary claims to Medicare based on the inaccurate diagnoses that the defendants put on the requisition forms,” the criminal court complaint against them stated.

Each defendant had a single count of conspiracy filed against them on Sept. 7 in the U.S. District Court for the Southern District of California, according to court documents.

During their Sept. 9 sentencing, both defendants were placed on three years of unsupervised probation, ordered to undergo periodic drug testing and respectively pay about $14,000 in restitution, as part of a plea deal reached Aug. 31.

Both defendants reportedly paid the restitution amount in full on Sept. 7, court records stated. Both women, whose cities of residence were not immediately available, had faced up to one year in prison, up to a year of supervised release, a maximum $20,000 fine and restitution up to $73,960.

The pair reportedly had approached the Medicare beneficiaries to perform nasal swabs that they knew did not test for COVID-19 but were instead general respiratory pathogens tests. They also took urine samples from beneficiaries that were unnecessary to determine COVID-19 status, court records stated.

Kubeck and Gonzalez then submitted forms explaining that beneficiaries underwent nasal swabs because they were suffering from acute respiratory infections and urine tests because the beneficiaries were long-term opiate users and had urinary tract infections, court records stated.

Both knew that the testing laboratories would then submit fraudulent claims based on the inaccurate diagnoses on the requisition forms they submitted, the U.S. Attorney’s Office stated in a press release.

Kubeck and Gonzalez’s clinic, Specialty Health Center LLC, was registered with the state on March 1, 2020, according to its business filing found at the Secretary of State’s website.

The U.S. Attorney’s office reported it was tipped off about the scheme by a property manager at one of the senior apartment complexes, according to media reports.

The Southern District of California worked with the Justice Department’s Criminal Division and agents from Health and Human Service-Office of Inspector General, Federal Bureau of Investigations, and Drug Enforcement Administration in the investigation and prosecution of these cases.

It’s unclear from the U.S. Attorney’s office information how long the testing scam occurred, but in April 2020, a similar testing scam was reported locally, with Calexico Police Department photographing what it believed at the time were fraudulent activities.

A group dressed from head to toe in personal protective equipment and claiming to represent a doctor from Indio were offering COVID testing.

El Centro Police Department and the county, through the Sheriff’s Office and the Area Agency on Aging, both released advisories warning of the potential scam on April 17, 2020.

“I drove down Third Street and saw five people dressed in space suits who said they were working for a doctor out of Indio and El Centro near a seniors’ complex,” Gerardo told this newspaper at the time.

The scam at the time was thought to be some form of insurance fraud or identity theft.

In an April 17, 2020 press release from the county, former Area Agency on Aging representatives said the fraudulent testing had occurred over the past three weeks. In each case, individuals claiming to work in the medical field have gone to senior apartments, offered testing, and requested personal information, according to the county advisory.

Previously, Roselia Kubeck had pleaded guilty in February 2014 in federal court for her role in helping smuggle immigrants into the country illegally in exchange for cash, along with her husband and a third accomplice. Kubeck was working for a local farmer at the time.

The trio had been accused in December 2013 of smuggling immigrants into the U.S. through a hole in the border barrier in Calexico, harboring them in El Centro and ultimately flying them north in a private plane piloted by Kubeck’s husband, Philip Kubeck.

In April 2014, she was ordered to serve six months in a halfway house as part of a plea agreement.

(This story was updated at 4 p.m. Wednesday, Sept. 22, to correctly reflect the city of residence of both women who pleaded guilty to insurance fraud.) 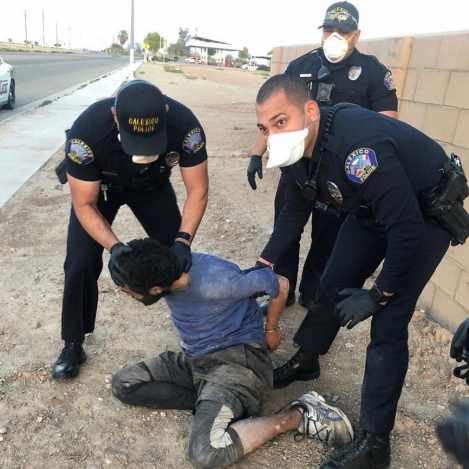