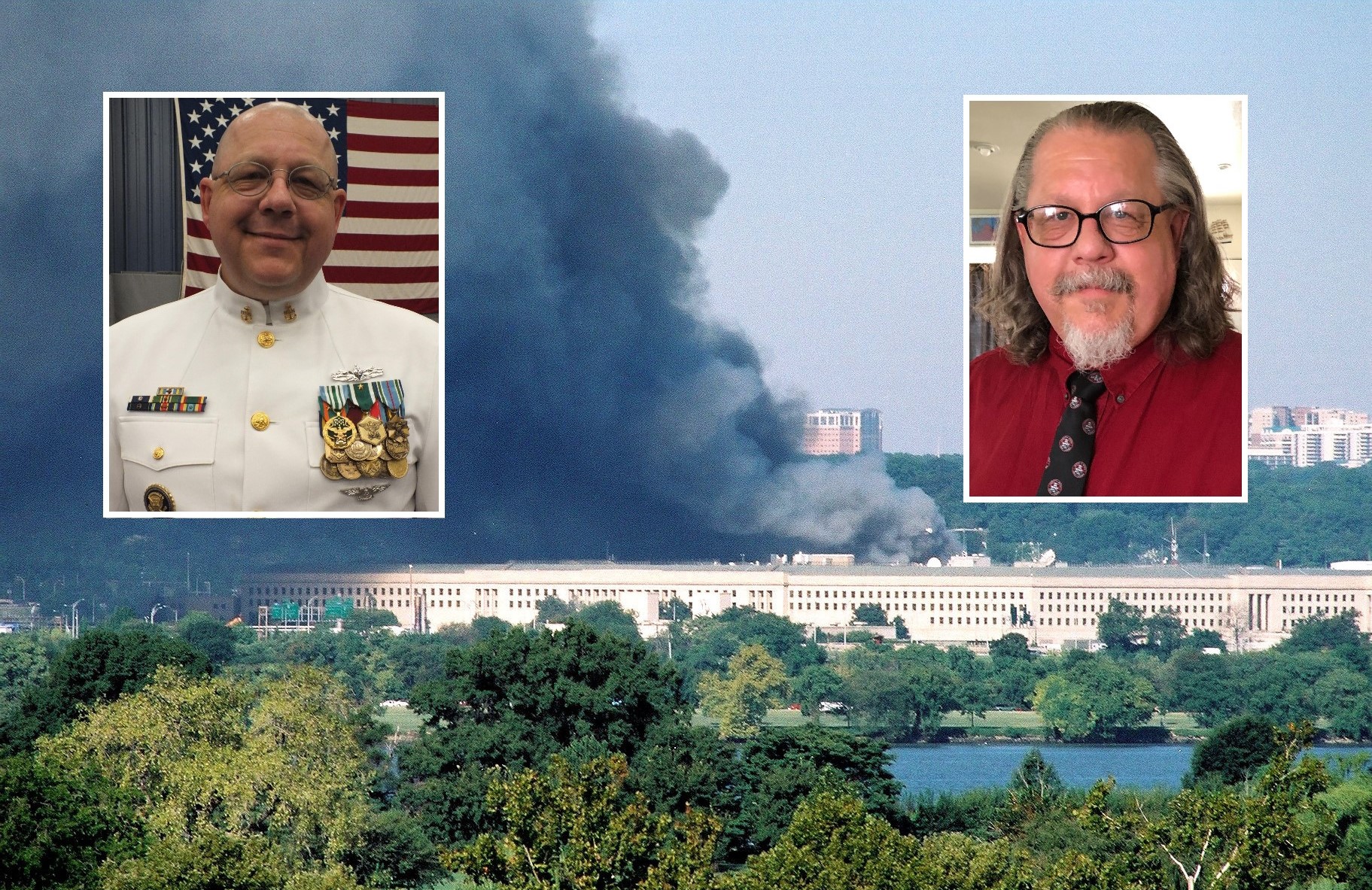 Kris Haugh finds himself focusing on the Sept. 11, 2001, Pentagon attack in Washington, D.C., both in his past (left photo from 2011, the year he retired as a chief petty officer in the U.S. Navy) and present jobs (right photo in his current job). Today he is a civilian employee working as public information officer at Naval Air Facility El Centro. Twenty years ago he was part of the White House Communications Agency in D.C. | DEPARTMENT OF DEFENSE AND COURTESY PHOTOS
Home
Featured Stories
Share

NAF EL CENTRO — A little shaggier, maybe even a little softer around the edges, 52-year-old Kris Haugh is pretty much doing today what he was doing 20 years ago.

Although on Sept. 11, 2001, the circumstances were far more dire, the prospect of death a bit more visceral, the future a lot more uncertain.

Back then, an attack on America to that degree was unfathomable. At least not in any way someone Haugh’s age — 32 at the time — could connect with.

“I don’t know what the people in Hawaii felt like on Dec. 7 (1941), but I can empathize with them,” Haugh said during a recent interview, referencing Japan’s attack on Pearl Harbor during World War II.

“Now, something happens that your wildest imagination couldn’t prepare for. … We woke up that morning,” he said of 9/11. “We had no idea that America would be so directly attacked, that there were those vulnerabilities that were beyond comprehension.”

Similarly, this is how enlisted U.S. Navy Petty Officer 1st Class Kristopher Haugh served the federal government and armed forces working with the White House Communications Agency while stationed at Anacostia Naval Complex on Joint Base Anacostia-Bolling in Washington, D.C.

When two hijacked jetliners had already flown into the Twin Towers, Haugh was across the Anacostia and Potomac rivers from what within minutes would become the military’s version of “Ground Zero” — the Pentagon, the headquarters of the United States Department of Defense.

Even at this point, word hadn’t gotten back to Haugh’s group about what was really happening.

“We were all just having coffee, kind of trying to start our day, when the officer in charge, a U.S. Marine Corps major, ran into the room and turned on the TV,” Haugh recalled of those minutes just after the first attack in New York.

“‘One of the Twin Towers has been hit,’” Haugh’s major told them. “So, we turned on the TV and were trying to figure out what was going on. And then we saw the second tower get hit.

“Nobody really thought terrorism at the very beginning, because there was no precedent for this. Personally, I thought it was really bad navigation error,” he added.

Yet at 9:37 a.m., that confusion would ratchet up, when while a little more than two miles southeast of the Pentagon, Haugh and everyone in the vicinity would hear the thunderous explosion of American Airlines Flight 77 crashing into the westernmost E-Ring of the facility, the side occupied by Army and Navy divisions.

“We heard this muffled boom, and at first we thought it was our building’s emergency generator. Once a month they would turn it on and every now and then it would backfire,” Haugh of the moment, unbeknownst to them, when the Pentagon was hit on the western side of the five-sided complex, in the opposite direction of where Haugh was positioned.

Haugh and his group worked on the third floor of their building and had roof access, so they raced upstairs to get a better vantage point after someone called in to tell them what had occurred.

“We looked over there, we can see, just moments after the Pentagon attack, that there was a raging inferno, there were flames coming out of it, billowing smoke,” he said. “We were just trying to figure out, ‘Holy Heck, what is going on?’”

If the World Trade Center was the symbol of a nation’s economic pulse in al-Qaeda’s quest to strike at the heart of America, then the Pentagon was the terrorists’ effort to target its might and unsettle its seat of military power. It had its intended effect.

“That day, it made us realize that, you know, despite the awesome capabilities our country has (militarily), we’re vulnerable,” Haugh said. “And so that kind of … you know, it’s like a punch in the gut.”

All told, the impact of a fully fueled 757 Boeing jetliner and the fire it caused killed 59 persons on the plane and 125 on the ground, nearly half of whom were military members.

On Saturday morning, Sept. 11, 2021, the five-plus-minute Patriot Day video message (SEE BELOW) and 9/11 memorial tribute that Haugh helped craft as head of base communications would go live on the NAF’s social media pages and YouTube channel at 6:37 a.m., the Pacific time zone equivalent to the moment 20 years earlier when military communications took on a newfound urgency.

During Capt. Perkins’ pre-recorded video on Saturday, a scrolling tribute finished out the message, displaying the names and ranks of the 33 active-duty sailors killed in the attack. There were 22 Army personnel killed as well, and 70 civilian employees and defense contractors.

Twenty years earlier, Haugh and the sailors he worked with got back to the critical task of issuing White House communiques at a time when national security was still at risk.

To put Haugh’s position in perspective as part of the government’s messaging infrastructure: Remember when someone whispers in President George W. Bush’s ear while he’s reading “The Pet Goat” to a class of second-graders?

That’s Kris. … It’s not Kris, but it’s the department to which Petty Officer 1st Class Haugh was assigned.

“They knew that the President was off on a trip at the moment,” he said of the focus that day. “You can go back, and you’ll watch the news, and you’ll see when one of the military aides whispers in the President’s ear while he’s reading to the children, ‘Hey, there’s been an attack, or there’s something going on’” Haugh said, imagining how the message was delivered.

Many have reflected on that indelible footage of what appears to be a man unprepared and stunned. Some criticism was even leveled that President Bush seemed unfazed or uncaring, but Haugh sees something very different.

“I have to give kudos to President Bush. He was very calm in front of all those children, didn’t do or say anything (alarming) … He just withdrew himself from the situation,” he said.

“I’m not sure how I would react if somebody whispered in my ear that there’s been this large-scale attack going on.”

Haugh would continue with the White House Communications Agency for a while longer. He was already at the tail end of the assignment. At one point he was deployed to Bahrain, the island nation off the coast of Qatar in the Persian Gulf. Haugh was there during “shock and awe,” the U.S. military’s massive assault on Baghdad, Iraq, in 2003.

Eventually, Haugh would come to call the Imperial Valley his home, his final “port” being NAF El Centro, where he would retire from the Navy in August 2011 as a chief petty officer.

The former Imperial resident became part of the base’s public information office as a civil servant. He just recently sold his home and moved to Yuma, from where he commutes daily.

Haugh took over the communications position full-time a few years after his retirement when head Public Information Officer Michelle Dee took her dream job out of state, he said, and he slid into the top spot.

The garrulous PIO doesn’t mind speaking on the Pentagon, but he stresses that he is no attack survivor, just someone in proximity to world-altering events, from which he said he has learned and gained much perspective.

“I wouldn’t say I was a survivor. But I took a lot of lessons out of that … we were in the presence … It was history in the making,” Haugh reasoned.

Today, in Haugh’s present position with the Navy, 9/11’s impact is focused with laser-like precision on the sailors lost, and it’s been clear that much of the specific reaction to the Pentagon has come from those closely tied to the armed services.

Who you are, he said, determines the freight behind your focus and feelings on most issues, including 9/11; it’s human nature.

“We focus on the Pentagon part because that’s the part that affected us the most. I would imagine that for a firefighter, the New York incident is what affected them the most, and for police,” Haugh said. “I think Everyman, and I use man as in the generic human being, can appreciate the sacrifice of those in Pennsylvania, where they tried to take back the aircraft.”

The Twin Towers, he said, have the added aspect of being a Tower Babel-like symbol, since so many people who perished there were from other nations.

“It affected everybody in different ways. Firefighters have their commemoration, as they should, with the 9/11 stair climb,” Haugh reasoned. “We tend to focus on the sailors that were killed at the Pentagon, because these are our shipmates. I would say that everybody has a connection somehow.”