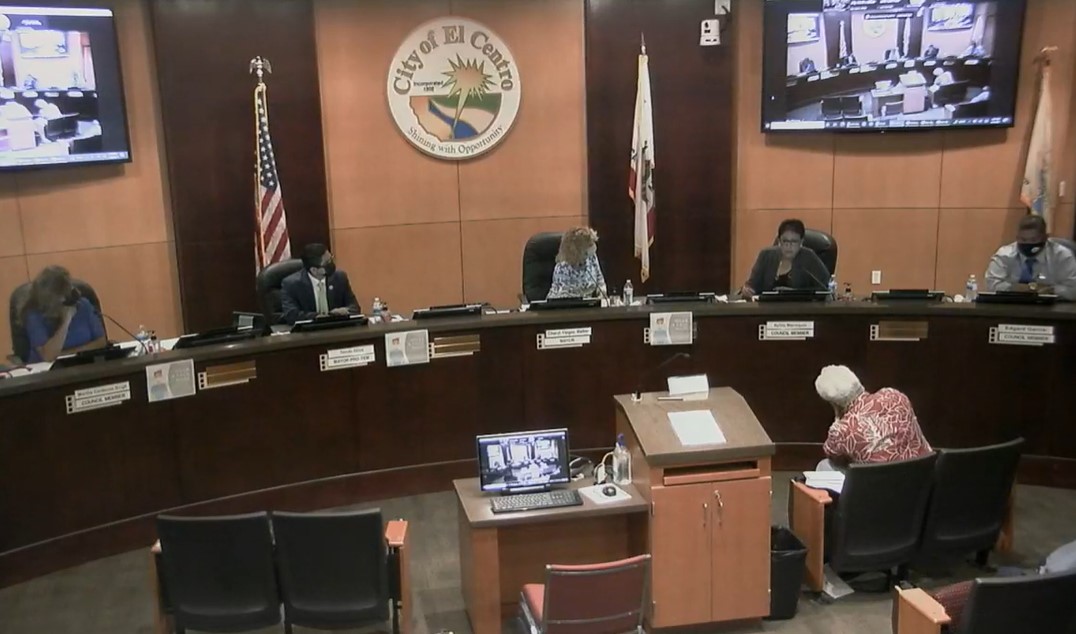 Current Mayor’s Selection of Former Mayor is Shot Down; Crematorium Also Goes Up in Flames

EL CENTRO — El Centro City Council member Sylvia Marroquin knows what it feels like to be passed over as a candidate for a seat as a member of the public on the El Centro Regional Medical Center Board of Trustees.

Had she been given the opportunity to serve on the hospital board in the past, Marroquin said she felt her business and finance experience could’ve been put to good use on the board’s behalf.

So, when faced with the decision to either approve Mayor Cheryl Viegas-Walker’s recommendation for a board seat — former mayor and ex-ECRMC board member Efrain Silva — or potentially select a candidate from a roster of 12 other applicants, Marroquin chose the latter.

Following the council’s 3-2 vote against Silva’s appointment, Viegas-Walker indicated she would recommend another candidate from among the 12 other applicants for potential approval during an October council meeting.

As sitting mayor, Viegas-Walker has the discretion to recommend a member of the public to serve on El Centro Regional’s recently expanded board.

“Efrain Silva has demonstrated tremendous personal integrity, leadership and commitment to his community and would’ve have been an outstanding addition to the ECRMC Board of Trustees,” Viegas-Walker said on Thursday, Sept. 9.

The council’s action on Sept. 7 was an extension of its previous July 6 decision to approve changes to the ECRMC board’s makeup.

On that day, it had unanimously voted to add the hospital’s chief executive, Dr. Adolphe Edward, as a voting member, and voted 3-2 in favor of raising the number of seated community members from three to four. The addition of Dr. Edward and the pending appointment of another community member would bring the board’s total voting members to nine.

When the issue of altering the ECRMC board was initially presented to the council on July 6, Mayor Pro Tem Oliva questioned the timing of the proposal, considering that the hospital was in the middle of renegotiating the master service agreement that governs its affiliation with University of California, San Diego. The agreement is set to expire at the end of the year, if not extended.

Oliva was also highly critical then, as on Sept. 7, of the process by which Silva’s proposed appointment was presented to the council for a vote. On both occasions he denounced the board’s application process for having been open to the public even though Mayor Viegas-Walker intended to appoint Silva.

“To be quite honest, I feel like we wasted (the public’s) time. I feel like we lied to them. I feel we deceived them,” Oliva said during the Sept. 7 meeting. “Why? Because this seat was already predetermined.”

Silva had previously missed an opportunity to be appointed when the council had voted to reappoint the two incumbent community members, as well as Viegas-Walker, to the ECRMC board during its July 6 meeting.

At that time, Silva had been one of eight community members who had applied to occupy one of the two board seats reserved for members of the community whose terms were about to expire. Board incumbents, president Amanda Brooke and secretary Joe Picazo Jr., also had re-applied and were ultimately selected by the council on July 6.

Other voting members of the ECRMC board include two UCSD representatives and two City Council members, which includes Viegas-Walker and council member Garcia.

Citing its minimal potential benefit to the community, the City Council unanimously voted to approve a resolution denying a conditional-use permit for a proposed 6,250-square-foot crematorium on the city’s east side.

During a public hearing the council convened July 20 about the proposed crematorium, the council decided to table the matter, since the resolution under consideration then was not drafted to allow the council to deny the permit, City Attorney Elizabeth Martyn said Sept. 7.

The resolution presented to the council explicitly stated its approval would deny the crematorium’s permit application, which had previously been approved by the city’s Planning Commission.

The council’s vote on Sept. 7 did not prompt much discussion from the council, except for Viegas-Walker stating for the record that the city had received two letters in opposition to the proposed crematorium. The letters were authored by the El Centro Community Senior Club and the Imperial Valley Yuma Ministerial Alliance.

Prior to the vote, Community Development Director Norma Villacaña summarized the opposing remarks that the council and members of the public had expressed during the July 20 public hearing, which this paper previously reported.

Those remarks included concerns about the crematorium’s air emissions, potential negative effect on nearby property values, minimal job creation, the fact that most of the cremations would be of bodies brought from outside the county, and the fact that the city’s two existing crematoriums are already situated on the city’s east side.

The moratorium was proposed by San Diego-based California Cremation & Burial, which had bought the Second Street property that had formerly been used as a recycling center. Unlike the July 20 public hearing, no company representative spoke on behalf of the proposed project on Sept. 7.

Community Fridges Not a Pandemic Fad. They’ve Become Entrenched in Neighborhoods As a Way to Fight Hunger.