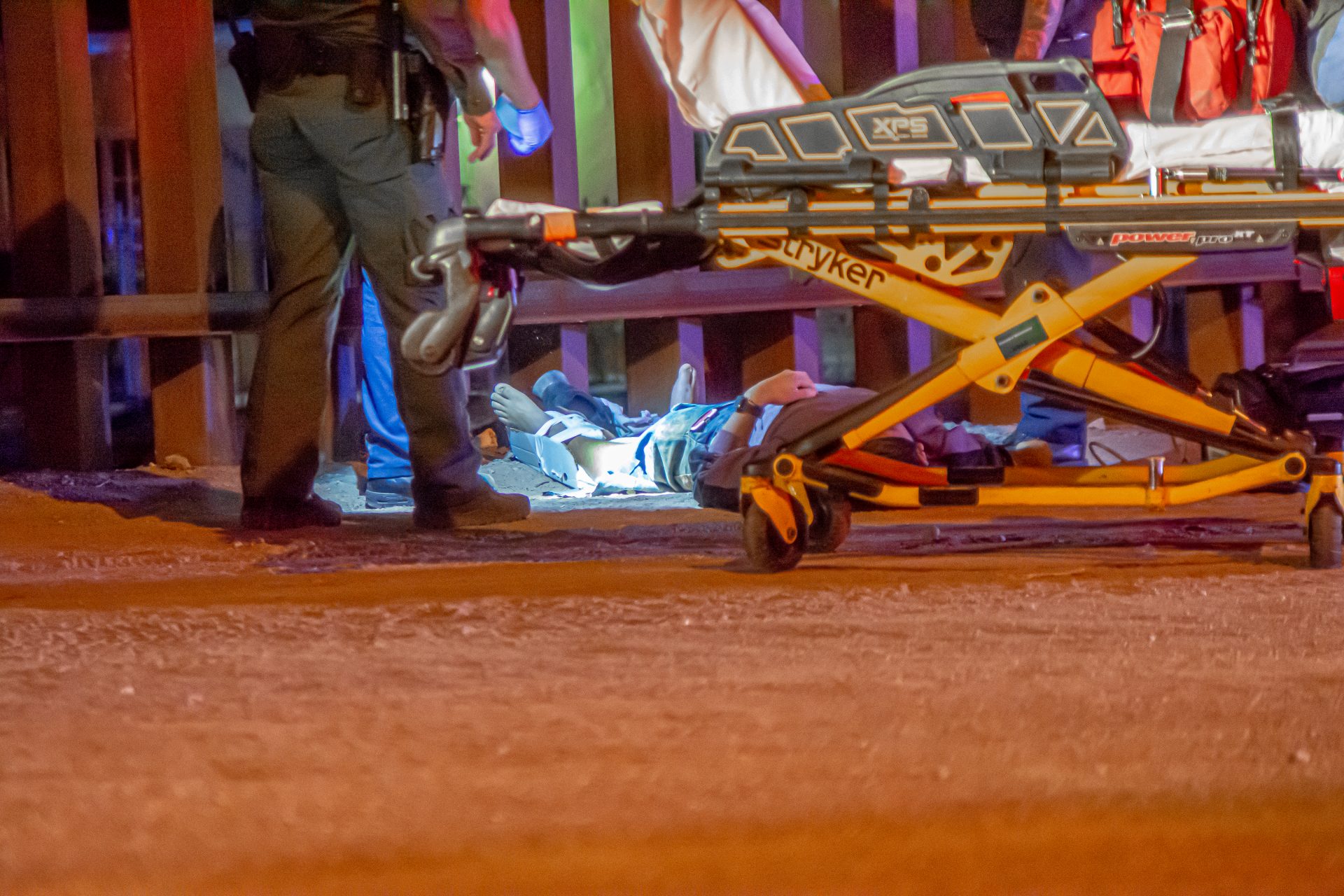 U.S. Border Patrol agents and Calexico paramedics brace the injured leg of a suspected undocumented migrant who fell from atop the 30-foot border barrier on the eastern edge of the city near Anza Road and J.A. Rodney Avenue on April 29. Two Mexican nationals died from Imperial County-area falls from the barrier that occurred in the early days of September, including one man who fell just east of the downtown Calexico Port of Entry on Sept. 3 and died from complications from that injury in a San Diego County hospital on Tuesday, Sept. 7. | CAMILO GARCIA JR. PHOTO
Home
Local News
Share

CALEXICO — Construction on the border barrier along the international boundary with Mexico has ceased, but what remains is dangerous — and deadly — for two migrants who fell in Imperial County just days apart after trying to scale its heights.

A Mexican national died in a San Diego hospital this week after he plummeted from the 30-foot bollard-style barrier just east of Calexico, the second such death reported from a fall in the region within in two days of each other.

The deaths stem from one fall on Sept. 3 near the downtown Calexico Port on Entry and one fall on Sept. 1 on the west side of the double barrier three miles south of the Andrade Port of Entry near Winterhaven, according to published reports.

These appear to be the sixth and seventh deaths along the expanse of the U.S.-Mexico boundary directly related to falls from atop a barrier that ranges in height from 18 to 33 feet.

Although it was not immediately available whether similar deaths have occurred in Imperial County in the past by individuals attempting to climb over the fence, broken ankles and legs and related injuries happen daily in Calexico city limits.

“Injuries are a very frequent occurrence,” said Calexico fire Capt. Eduardo Ainza, who confirmed the department responds to about one such incident a day.

Nor is it uncommon for the Fire Department to respond to upward of five daily reports of injuries, Ainza said during a brief interview on Thursday, Sept. 9. He can’t recall anyone dying from a fall in Calexico.

Earlier on Thursday, a press release from the Washington, D.C., communications office of U.S. Customs and Border Protection reported that the most recent death occurred on Tuesday, Sept. 7, in a San Diego County hospital from complications from a broken leg.

The incident reportedly occurred about 9:30 p.m. Sept. 3, the Calexico Fire Department reported. The Mexican national was identified as Humberto Guzman Martinez, age 50, according to the San Diego County Department of the Medical Examiner.

Across the county, south of the Andrade port, the Mexican migrant who fell on the west side of the double barrier was rescued by the Yuma Sector Border Patrol. He died that same day, Sept. 1, after emergency surgery in a Maricopa County, Arizona, hospital, Customs and Border Protection officials also reported. His identity has not been released by federal officials.

It’s unclear if falls from attempts to scale the barrier have become any deadlier across the border, or whether the numbers are a proportional reflection of the rise in individuals who have migrated toward the United States from Mexico, Central America, and other parts of the world since earlier this year. There are relatively new and elevated sections in place in California, Arizona, New Mexico, and Texas.

El Centro Sector Border Patrol has seen a drastic rise in immigrants seeking both legal asylum and illegal entry in recent months, but the scale of the influx in the Yuma Sector has been dizzying at times.

“Agents apprehended approximately 1,100 migrants who illegally entered the United States from Mexico over the weekend. Several large groups were among those entries: groups of 45, 47 and 57 on Friday; 108 and 60 on Saturday; 41 and 71 on Sunday and 52 and 49 this morning,” Yuma Sector reported on its Facebook page and Twitter account on Aug. 23, posting infrared drone photos.

Federal officials, at least during the immediate past presidential administration, have never disputed the fact that a higher border barrier was part of an enforcement strategy to deter undocumented immigration, but few have outright theorized that the strategy might be more lethal.

“Border infrastructure is getting deadlier, and people’s reasons for moving are increasing as well. So, it is just a bad combination,” Brown University professor, former border-area paramedic, and author Ieva Jusionyte told National Public Radio in an interview on the subject in March.

“Falls from that height — it results in multi-system traumas,” said Jusionyte, who is a professor on international security and anthropology at the Rhode Island university and author of “Threshold: Emergency Responders On the U.S.-Mexico Border.”

Counting backward from the two Imperial County-related cases, previous published media reports show a migrant died (No. 5) in Yuma Regional Medical Center some six days after falling from the double fence into an open field in Yuma County on July 26. A migrant died (No. 4) in a Texas hospital in July after lapsing into a coma from two emergency surgeries from a June 12 fall near Brownsville, Texas, and another migrant died June 11 (No. 3) near El Paso, Texas, after a fall.

In cases in May and again around June 28, two men (Nos. 2 and 1) died from separate falls near the Otay Mesa Port of Entry in San Diego County.

The highest profile cases of similar events came in March 2020, when a 19-year-old Guatemalan migrant, who was eight months pregnant, fell onto her back from atop the border fence near Clint, Texas, and was found by Border Patrol. She died in an area hospital after multiple surgeries. Her unborn child, despite an emergency Cesarean section, did not survive.

Although Border Patrol officials have said they do not collect data on fall-related injuries, causes and manner of death are reported, El Paso (Texas) Matters, a nonprofit news organization, reported in February.

“The protocols for emergency responders,” Jusionyte told El Paso Matters, “is that if anyone falls from the height of more than double their heights, they need to be evaluated at the hospital.”

Calexico’s Capt. Ainza said firefighters typically respond to incidents that span the length of the barrier within the city’s jurisdiction. Because it does not respond to reports of injuries outside of city limits, Ainza said it is difficult to determine just how many other injuries might be taking place in Imperial County.

About half of the incidents in Calexico require the injured party to be airlifted out to a trauma center, he said. Injuries sustained will typically be to the lower extremities, such as ankles, legs and, occasionally, the hips.

On Sept. 3 incident, the fall was observed by a Border Patrol camera operator, prompting additional agents to respond to the scene and discover the man had sustained an injury to his leg, the Customs and Border Protection press release stated.

Calexico Fire Department personnel were notified of the incident and subsequently transported the man to El Centro Regional Medical Center. He was eventually transferred to a hospital in the San Diego area, where medical personnel made efforts to treat his leg, federal authorities stated.

Ultimately, the man died due to complications, but it wasn’t immediately available whether those complication resulted from emergency surgery, which appears to be the common occurrence.

The Sept. 3 incident is being reviewed by the San Diego County Medical Examiner’s Office and CBP’s Office of Professional Responsibility. The U.S. Department of Homeland Security Office of Inspector General was also notified of the incident, CBP reported.

In the Sept. 1 death, the migrant fell over the western barrier of the double-fenced portion, federal official reported. Agents from the Yuma Border Patrol station had to unlock a gate in order for paramedics to reach the injured man.

An ambulance was not able to drive through the gate, which forced Border Patrol agents to carry the patient for about a mile until paramedics could transport him to a nearby landing zone, according to an Arizona news report.

The man was flown to Abrazo West Campus Hospital in Goodyear, Ariz., and underwent emergency surgery. He died about eight hours later, according to reports.

The Maricopa County Medical Examiner’s Office was investigating the man’s death and CBP stated on Sept. 3 it was reviewing the case.

Calexico’s Ainza emphasized on Thursday that department personnel do not inquire about an individual’s immigration status before providing medical assistance.

“We don’t take citizen status into account when rendering treatment,” Ainza said. “When we get called for medical aid, we just see a patient.”

(This story was updated on Monday, Sept. 13, with the identity of the man who died from the fall in Calexico.) 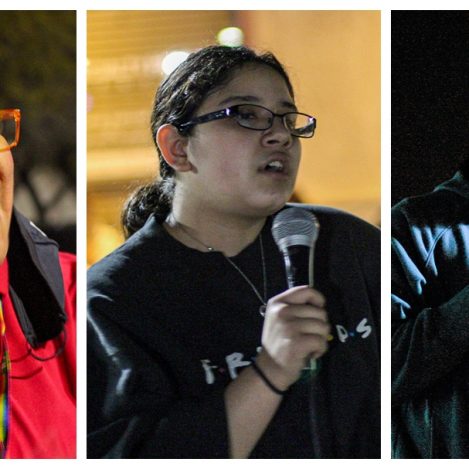