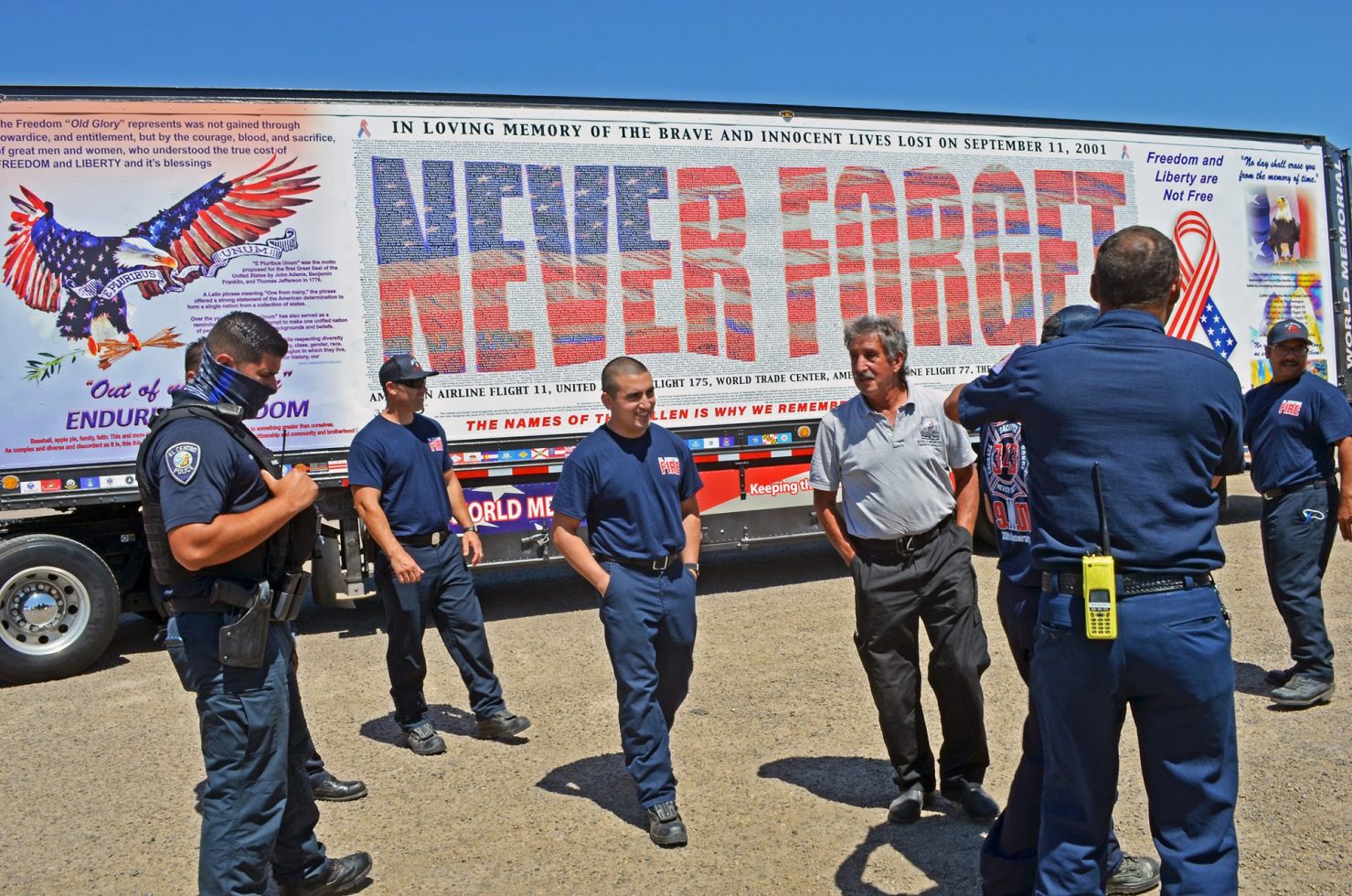 Members of the El Centro police and fire departments speak with Mitch Mendler (gray shirt), a firefighter and president of Project 2978, a traveling 9/11 memorial exhibition that made a pitstop at the travel center on Wake Avenue in El Centro on Friday, Sept. 3, on its way to Phoenix, then to its final destination of Jefferson City, Missouri. | JULIO MORALES PHOTO
Home
Public Safety
In Public SafetyRegional News

EL CENTRO — El Centro fire Engineer Robert Gonzalez was just a 10-year-old fourth-grader on Sept. 11, 2001. Like most of the nation that day, he and his classmates sat transfixed by the televised news coverage of the terrorist attacks and subsequent collapse of the World Trade Center towers.

The 9/11 attacks had a profound effect on Gonzalez. For one thing, the images from that day of public safety personnel bravely running into harm’s way prompted Gonzalez to eventually pursue a career as a first responder.

Secondly, the events also inspired Gonzalez to have a greater appreciation for efforts aimed at teaching a younger generation of Americans about that fateful day.

“I think education is very important,” Gonzalez said. “I know what it’s like being a kid studying Sept. 11 (2001), and not understanding.”

For those reasons, Gonzalez said he wanted to be on hand to greet the organizer of a travelling 9/11 memorial exhibit when the traveling piece of history took a brief cross-country pitstop in El Centro on Friday, Sept. 3.

The mobile exhibit, known as Project 2978, had just departed the San Diego region and was bound for Phoenix for a scheduled stop and exhibition of its Sept. 11-related artifacts before reaching its final destination in Jefferson City, Missouri, on Wednesday, Sept. 8.

The mobile exhibit is transported inside a 40-foot cargo trailer that itself is adorned with a “40-foot honor roll.” The honor roll includes the names of the 2,978 individuals who died as a result of the 9/11 attacks on New York City, the Pentagon, as well as aboard United Airlines Flight 93, which was hijacked by terrorists and crashed in Somerset County, Pennsylvania, after crew members and passengers attempted to regain control of the aircraft.

The project’s unscheduled pitstop drew some curious onlookers, as well as a sizable crowd of El Centro’s public safety personnel, including Gonzalez and some of his fellow El Centro firefighters.

“I think events like that are important for children who maybe weren’t alive when Sept. 11 (2001) happened,” Gonzalez said. “It’s just to make people educated on 9/11 so they don’t forget those who died and those who sacrificed themselves for the health and safety of others.”

This newspaper called on various school districts over the last few weeks to survey how they reached high school students about the events of 9/11, but many of those districts contacted did not respond.

For its part, Project 2978 is dedicated to honoring the first responders and keeping alive the memories of those who died in the terrorist attacks. The idea for the memorial was conceived of on Sept. 11, 2001, by a major airline pilot who was deeply impacted by the day’s events, said Mitch Mendler, Project 2978 president.

“We like to say it was the first 9/11 memorial created,” Mendler said during the project’s brief stop at the Super Stop Travel Center parking lot on Wake Avenue.

While the exterior of the cargo trailer is adorned with 9/11-related imagery, about five total Sept. 11-related displays are being transported inside the trailer, including separate memorials for both of the Twin Towers.

And though the brief pitstop precluded Project 2978 from showing off any of its display material, Mendler provided some details about one significant exhibit item the project had been able to acquire about 10 years ago: a steel support beam belonging to the collapsed South Tower.

The five-foot long I-beam weighs more than 700 pounds and was reportedly part of a box column that occupied the 43rd floor of the South Tower, Mendler said. It was among the dozens of artifacts that were recovered from Ground Zero and transported elsewhere for study.

The segment of the steel beam was obtained by Mendler from the Port Authority of New York and New Jersey after authorities concluded their analysis.

“We were lucky enough to get this piece, which is one of 236 pieces studied,” said Mendler, who is also employed as a San Diego Fire-Rescue firefighter/paramedic.

Since 2001, Mendler has been with the nonprofit World Memorial Foundation, which administers the Project 2978 memorials, as well as the Patriot Flag tour, which had transported a large 30-foot by 56-foot American flag across the country in advance of the 10th anniversary of 9/11.

As part of the cross-country tour that briefly brought Mendler to the Valley, he was being escorted by an Arizona law enforcement official, as well as members of the Patriot Guard Riders, a motorcycle organization whose members volunteer for the memorial services of fallen public safety personnel upon request.

Project 2978’s brief stop also allowed the El Centro Firefighters Association, of which Gonzalez is its president, to display some 9/11 solidarity of its own. Association members who were present for the project’s quick layover had worn T-shirts whose large backside image memorialized the Sept. 11, 2001, attacks.

The T-shirts are being worn through the month of September by local fire agencies and were initially proposed by Holtville Fire Chief Alex Silva as a way to pay tribute to the New York City Fire Department firefighters who died on 9/11.

Although each respective local agency will have lettering on the T-shirt’s front identifying their own department, the T-shirt’s backside has an image of the firefighting profession’s Maltese Cross, with the numeral 343 in its center. The 343 is a reference to the number of firefighters who died on 9/11.

The words “Courage,” “Sacrifice,” “Honor” and “Never Forget” are printed within the cross, while images of the Twins Towers are transposed in place of the numeral 11 in the accompanying “9.11.01” dateline. An American flag also serves as a backdrop for the cross, date, and the words “20th anniversary” which appear on the T-shirt.

The association is selling the T-shirts through its social media accounts. The proceeds are to go toward the National Fallen Firefighters Foundation.

“This year, all the department in the Valley are wearing the same 20th anniversary logo,” Gonzalez said. “The purpose is to show solidarity and unity amongst the firefighters and support for the 343 who died.” 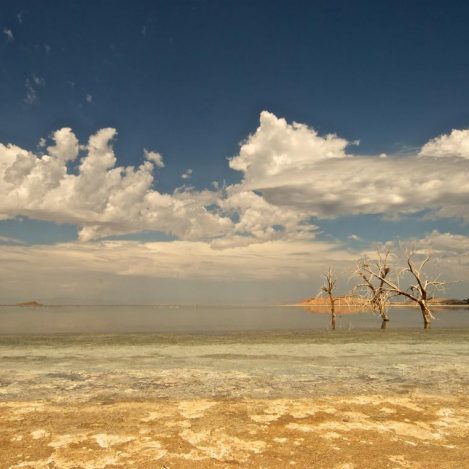