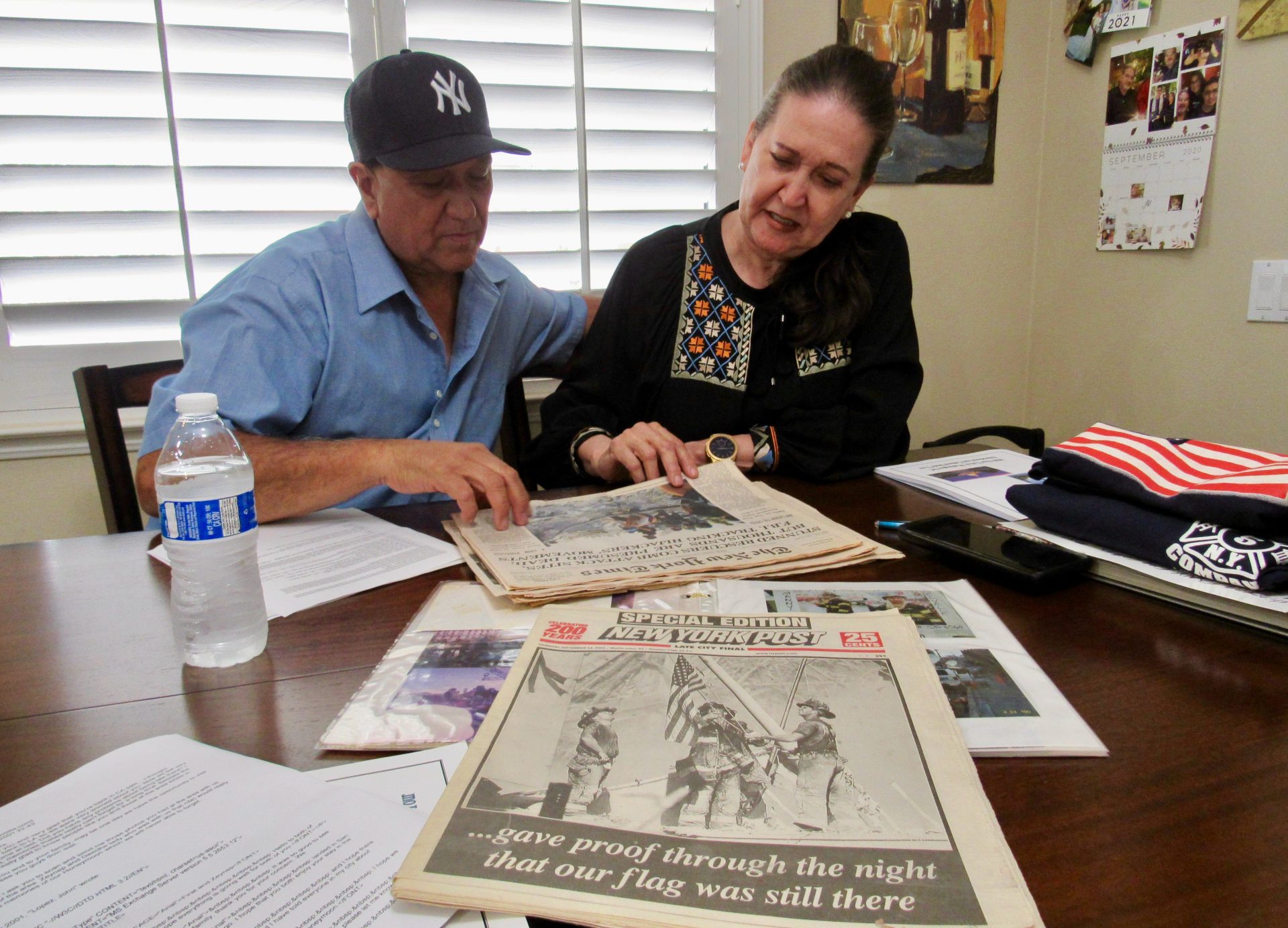 Johnny Lopez of El Centro and Rosalie Lopez of Calexico talk about their experience in New York City on Sept. 11, 2001, when the siblings and their mother, Adela, were headed to the Twin Towers to “have breakfast at the top of the world” when the deadliest terrorist attack on U.S. soil occurred. Johnny and Rosalie have newspapers from 20 years ago spread out in front of them on Saturday, Sept. 4. | MARCIE LANDEROS PHOTO
Home
Featured Stories
Share

EL CENTRO — Rosalie and Johnny Lopez and their mother, Adela, were on their way to have breakfast at the World Trade Center on the morning of Sept. 11, 2001, when they became witness to one of the most horrific and significant events in American history.

“Every year it comes up, and it’s hard. We feel for everyone who lost their families. I’ll never forget the people out there waiting, looking for their loved ones,” said Johnny Lopez, 61, of El Centro during a recent interview with this newspaper.

Days from of the 20th anniversary of the largest terrorist attack ever on United States soil, in which the Twin Towers that loomed so large over the New York City skyline were felled after two hijacked airliners were flown into the iconic structures, the Lopez siblings sat down on Saturday, Sept. 4, to discuss their memories of that fateful day.

As the nation prepares to mark two decades since the coordinated attacks on New York, the Pentagon in Washington, D.C., and an attempted attack in which hijacked passengers of Flight 93 overtook a crew of al Qaeda terrorists crashing into a field over Shanksville, Penn., the nation in many ways has never been more divided.

“This country needs to come together. It shouldn’t take something like this to unite everyone. Maybe in the coming year, the country won’t be so divided, and maybe something good …,” Johnny trailed off somberly toward the end of the interview. “It’s something to remember.”

A Mother’s Health … And Intuition

Johnny and Rosalie and their mother were wrapping up their New York trip when the attacks occurred. Rosalie, now age 66, had been the driving force behind the trip, inviting Adela, now 90, to go with her to a conference in Chicago, then offered to fly her mom to New York to “have breakfast at the top of the world” in the World Trade Center.

They invited Rosalie’s brothers, Johnny and Mike, but Mike, being a firefighter, got an emergency call and cancelled at the last minute, they said during the interview in Johnny’s El Centro home.

The family got a late start to breakfast that morning. With Adela being diabetic and concerned about not eating, she insisted they stop one or two bus stops before arriving the Twin Towers to eat something small.

“That’s what we always thank mom for, for pushing us, that she didn’t know what (to) expect, the waiting, the line, the elevators,” said Rosalie, who lives in Calexico with Adela.

“She just wanted to get something in her system,” said Rosalie with a sigh, whose mother was not present for the interview Saturday. “So, that was an intuition.”

A few minutes after they ordered something to eat at a stop, at 8:46 a.m. Eastern time, they heard a sound that Rosalie described as a soda can being crushed in your ear, then the sirens.

They wouldn’t know it at the time, but that was Flight 11, an American Airlines Boeing 767, crashing into the north tower.

Everyone rushed to the streets, Rosalie said, and she thought a crane had fallen.

In the confusion, they heard people scream and another loud sound about 20 minutes later, and then they saw the smoke and fire coming from the towers. The second sound was United Airlines Flight 175, another Boeing 767, hitting the south tower at 9:03 a.m.

What the Lopez family had unknowingly witnessed was one of a series of three planned attacks by terrorist group al Qaeda, headed by Osama bin Laden, attacks that would be achieved by an elaborate plan to hijack four airliners and crash them into significant and symbolic American targets in an attempt to cause as much death as possible.

Yet at the time, Johnny and Rosalie were unaware of the devastation they had witnessed.

Thinking it was just a terrible fire at the World Trade Center, they redirected their trip to other parts of New York. They made their way to the Cathedral of St. John in lower Manhattan, when a doctor came inside the church and asked if anyone had any medical training and said help was needed at Ground Zero, only it wouldn’t be referred to as such until sometime later.

Johnny and a nurse who was also inside the cathedral volunteered to assist. Johnny, who was working at U.S. Gypsum, was certified as an emergency medical technician for the job. He still works there today.

He said he was then bused to a camp outside of Greenwich Village, where Johnny was placed on a team to help triage and stabilize victims. He worked all day there, finally stopping when they were released late that evening.

As Johnny was leaving, organizers gave the responders information where people could try to reconnect with loved ones missing near the towers.

As he stepped out into the crowd, a woman ran up to Johnny and grabbed him by his shirt and begged him to help her find her daughter; she was screaming. Johnny froze for a moment, finally able to tell her where she could look the next day, but that moment left a scar.

“It took me a long time to get over it, her screaming for her daughter,” Johnny said softly. “After that, you know I just couldn’t talk anymore. People were yelling, ‘Have you seen my brother? Have you seen my mother?’

“And all I could do is just walk through the crowd. I couldn’t talk anymore,” Johnny said.

After the attacks, Johnny, Rosalie, and their mother were stranded in New York City. “We wanted to get out so bad,” Rosalie said.

This was at the tail end of their trip, and they had originally planned to fly home on Sept. 12, but the airports were shut down for days and they weren’t able to leave until Sept. 16.

“We could still see the smoke, and it was still burning,” Rosalie said of the day they left.

Rosalie, who was in charge of Imperial Valley College’s Upward Bound program, a college-outreach initiative that worked with all seven high schools in Imperial County, decided while she was there to try to connect her students to the people affected by the attack in New York.

She found a flyer for a missing person, New York City (FDNY) Firefighter Manuel Del Valle Jr., one of the 340 firefighters killed on 9/11, who was listed as missing at the time, and took it home with her.

“After I returned from New York City from the unimaginable attack on the Twin Towers, I found that one for the best ways we can unite, strengthen our community, and make all our lives better is to help our young people to become better educated and find a meaningful path in life,” Rosalie wrote of her motivations in bringing that flyer home, “and to learn of those that gave their lives to help in the World Trade Center towers, the Pentagon, and the crash of Flight 93.

“We adopted Manny Del Valle Jr. to show his strength, (unity), and heroism. A firefighter who entered a burning building to help others,” Rosalie continued in a statement she sent to this newspaper after her initial interview last week.

“That’s how close we got and how it changed us, just by taking something with us to share with our students in Imperial Valley,” Rosalie said as she talked about the first trip, sharing pictures of her students and a book that was signed by those at Engine Company 5.

Once the 9/11 Memorial & Museum opened on the 10th anniversary of the attacks in 2011, Rosalie began to take her students there each trip. She would share Del Valle’s story and ask them to find his name inscribed in the memorial.

“They cancelled my last trip, in 2020, because of COVID. I am retired now …,” she said, as she closed a book full of photos. Some 50 students were slated to attend. “I hope they keep this going, and hope they go back when this (the pandemic) is over with.”

For Johnny, his hopes for the future are grander in vision: he wants to see the nation heal itself and come together like it did in the aftermath of 9/11. He remembers what the country was like after the attacks.

“I’ve seen a lot of people volunteer and everyone coming together. I think for the next several years, there was a lot of camaraderie and politics wasn’t even a thing,” he said. “It didn’t matter if you were a Democrat or a Republican, or whatever, everybody was united, you know?” 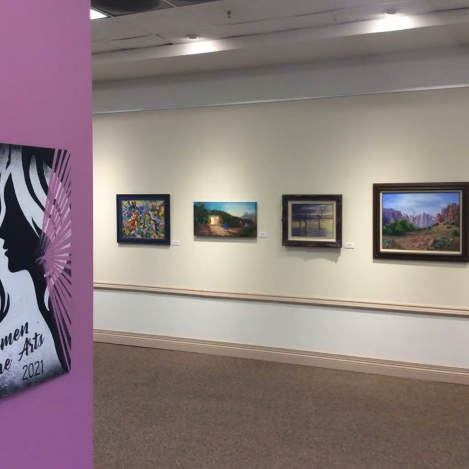