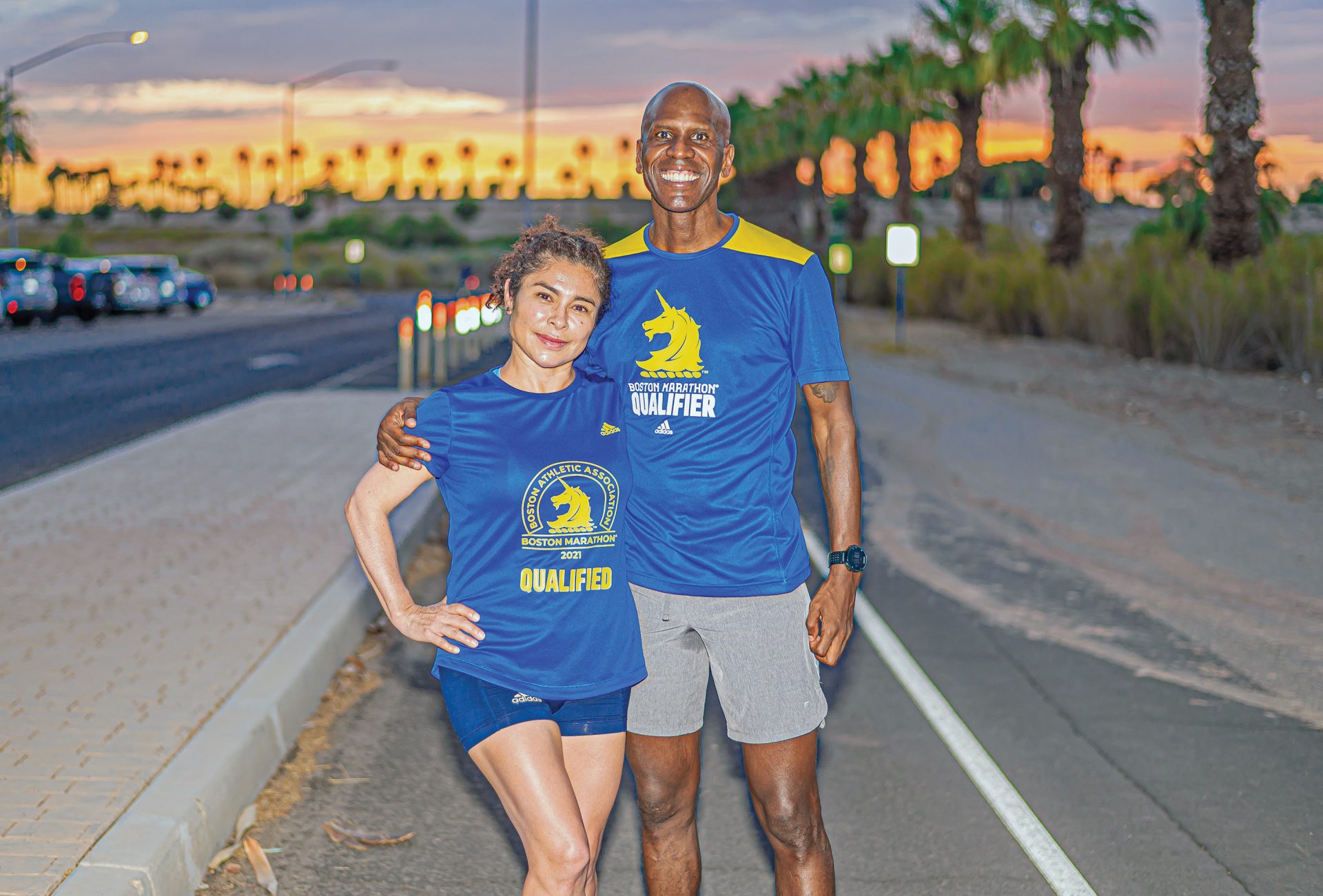 Arcy Selk (from left) of Brawley and Curtis McLaurin of El Centro will both run in the 125th annual Boston Marathon on Oct. 11. They are seen in the shirts they earned as qualifiers. McLaurin helped to inspire and spur on Selk to train to qualify for the event, which he previously ran in 2017. Selk has only been running competitively for five years. | CAMILO GARCIA JR. PHOTO
In Featured StoriesRegional NewsSports

Brawley and El Centro Residents Join a Field of 20,000 for the 125th Annual Boston Marathon

BRAWLEY — Arcy Selk’s first run was the Oakley Elementary School anti-bullying run in Brawley and it was ugly — she had mouthfuls of dirt, wind and tears in her eyes, and pain in her legs.

She didn’t think she would be able to finish.

“I turn around and see a father holding a little girl’s hand and I thought, ‘shame on you, Arcy, look at the little girl. She is here running for her right, she does not want to be bullied anymore, and you are here crying?’” the 40-year-old Brawley resident and homemaker said during an interview on Monday, Aug. 30.

The sight of the girl pushed her across the finish line and into third place overall for that run.

In contrast, Curtis McLaurin, age 50, of El Centro is a running veteran of many years. He has been competing in cross country since he was 11 years old after playing football but finding his footing in running.

A U.S. Navy veteran who works in administration at Naval Air Facility El Centro, McLaurin would go on to run in the All-Navy track team in the 1,500 meters. He attended an Olympics camp in 1992 but was unable to qualify for the games. He picked up marathon running in 2000, with the All-Navy team in Washington state and has stuck with it ever since.

While Selk and McLaurin couldn’t be more different in their depth of experience, both will represent the Imperial Valley next month in the granddaddy of long-distance events, the 125th running of the Boston Marathon.

The pair know each other well and came together at Cattle Call Park in Brawley on Monday night to show off the Boston Marathon shirts they earned for qualifying ahead of the Oct. 11 event.

Selk and McLaurin will join a field of 20,000 participants from around the world that include Olympians, World Athletics Marathon champions, Paralympic medalists, Abbott World Marathon Majors winners, and other national and international sports figures, celebrities, and everyday people. The local duo will attend the live event, which will be complemented by a virtual race Oct. 8 through Oct. 10, according to the Boston Athletic Association.

Selk has only been running for five years. Before that first race, she had always dreamed of competing in a 5-kilometer (3.1 miles) run, but even saw that distance as too intimidating.

She promised her mother-in-law, who was a runner, that she would one day do a big run. That first Oakley Elementary event was a 5K, and it sparked something inside Selk.

Since then, she has earned at least 250 medals in 5Ks, 10Ks, 50Ks and other marathons (26 miles). Selk has run and won the Blue Angels 5K and the Yuma marathon, a run in Las Vegas, The Peak (also known as “The Beast”) run in Julian, and has run down Hollywood Boulevard. She’s also been as far as Vancouver, British, Columbia, Canada for the Queen Elizabeth run.

Selk has shed blood, sweat, and tears to keep running and for what she says is a love of the freedom it gives her.

She has actually become “the greeter” at Cattle Call Park because she gets there so early in the morning and says hello to everyone, she said. Selk is such a regular that the staff at Cattle Call know where she parks in car and are ready to give her encouragement or even a bottle of water.

“I’m just a crazy lady who runs a lot, and they get excited when I take some time off, and they’re happy to see me,” she said. “It’s amazing, they don’t really know me, but they call (out to) me, ‘Good morning.’”

Selk believes she is the first woman from the Imperial Valley to qualify for the Boston Marathon, although that could not immediately be verified. The Las Vegas run in April was what qualified her for the big event. Selk did not think she was fast enough, but woke up one day and thought, “Why don’t I give it a try?”

On Mother’s Day, she got the email that she was accepted to run the Boston Marathon.

“I was shocked, I wanted to cry, I wanted to scream,” said Selk, who got her son to read the email just to be sure. “It’s an amazing feeling, and I thought if winning already feels like this, then this is awesome!”

Selk’s mother-in-law died not too long ago and never did get to see her run, but Selk said she is sure she would be proud of her for conquering her fear.

McLaurin, on the other hand, he’s been to Beantown before, qualifying in 2017. Despite how serious he was about the competition, he remembers there being a festive air at the event, with so many people present.

He has since done fun runs, trail running, and “just short” marathons. He has also become a part of the Imperial Valley Run Club, a fun club dedicated to running and teaching people how to run properly.

This is the same club Selk is in, and McLaurin is the one who pushed Selk to train and qualify for the Boston Marathon the day she woke up and decided to go for it.

“The average person couldn’t just wake up and qualify for Boston,” McLaurin said. “It’s got to be in your genetic makeup … and Arcy just happened to have them.”

The Boston Marathon was run virtually in 2020 due to the ongoing coronavirus pandemic. According to the Boston Athletic Association, a total of 16,183 finishers in all 50 U.S. states and nearly 90 countries brought the spirit of the run to the Massachusetts city’s streets and neighborhoods.

This year, the race gets under way much later than its annual April start date and with a much smaller starting field.

To qualify, runners had to make certain times within their age group and experience levels. Both Selk and McLaurin had to make times faster than 3 hours, 40 minutes, and 3 hours, 25 minutes, respectively.

What made this year’s qualification even tougher was the reduction of numbers. Normally 80,000 participants are registered for the Boston Marathon with only 2 percent of those who apply for a spot getting one. Due to COVID-19 restrictions this year, only 20,000 runners made it.

This year will be a more staid affair, McLaurin said, but once the runners are released all at once, he is sure it will feel just the same as the last time.

McLaurin is going in with a lighter heart, planning to just have fun with his run and enjoy the ride. He will probably be giving high-fives while running and getting into different antics along with coming away with the prize qualifying jacket and special 125th anniversary medal, he said.

“Boston is a victory lap, not a race,” McLaurin explained. “The qualifying jacket is the most important thing. Because if you show up to a race with a Boston qualifying jacket, people know what your fitness level is.”

McLaurin added this will be his last full marathon. He doesn’t plan to stop running, but he will scale back to half marathons and fun runs after Boston.

He hopes that his and Selk’s experiences will inspire more runners to go on to run, because according to him, there are a lot of people in the Imperial Valley who can run with the best.

“It’s like, ‘Hello there! We are here, we exist, we are right next to the Salton Sea,’” Selk said.

“When we go places, we go places to strictly represent the Valley,” McLaurin offered “We go and spank, but and we go, ‘Yeah, that’s right, we’re desert runners.’” 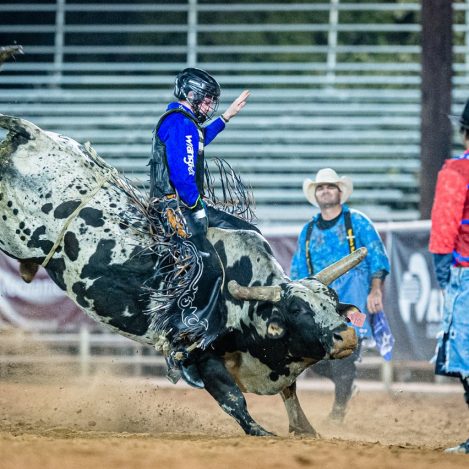