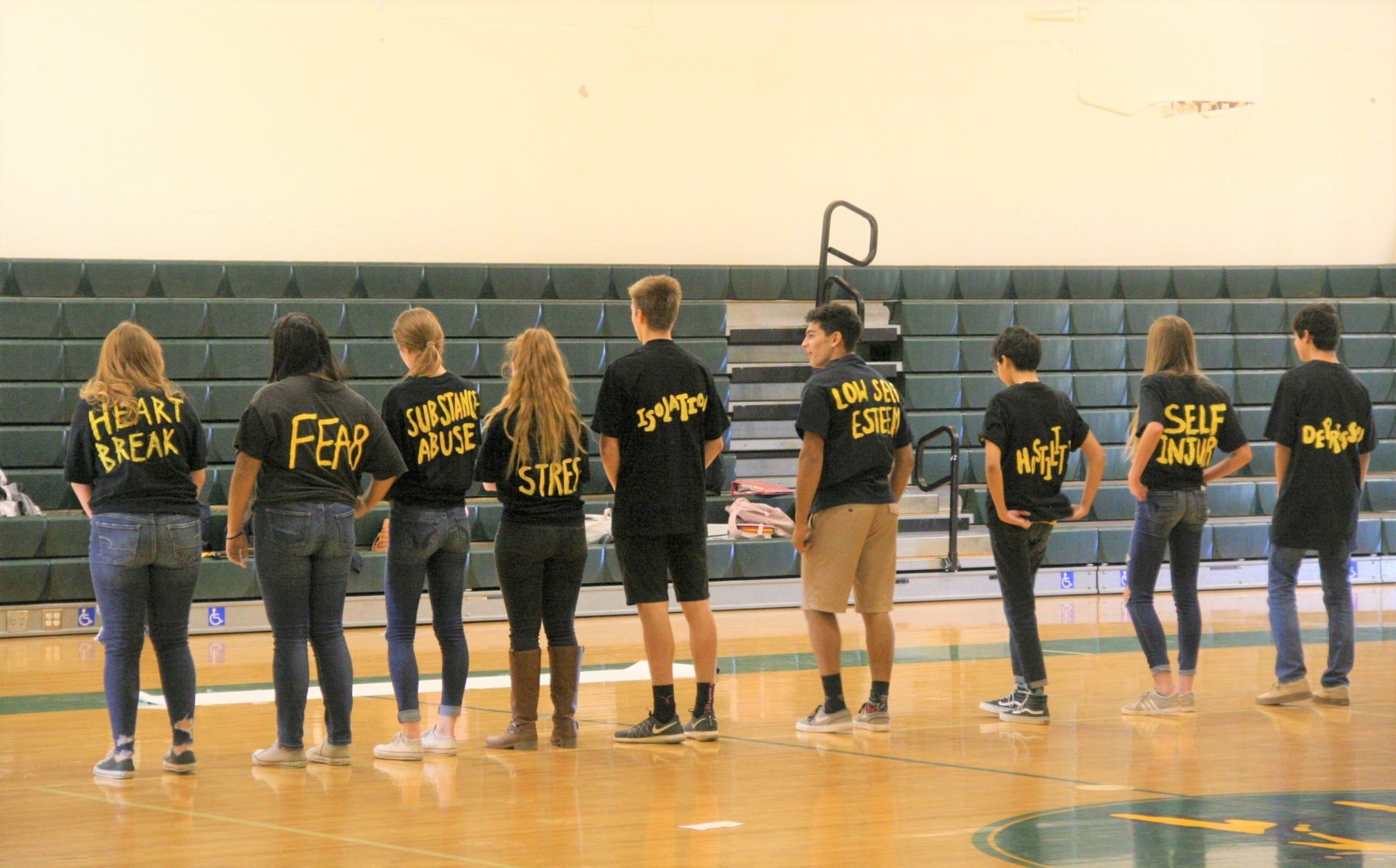 Members of Holtville High School Yellow Ribbon Club in 2017 perform a suicide prevention awareness skit inside the gymnasium in which club members wear t-shirts with words and phrases connected to potential warning signs and causes of suicide. The Yellow Ribbon Club was to meet for the first time in person on Thursday, Sept. 2, since the pandemic started. | FILE PHOTO
In EducationRegional News

HOLTVILLE — Holtville High’s storied suicide prevention club, affiliated with the national Yellow Ribbon Suicide Prevention Program, was to host its first in-person meeting this week since the start of the pandemic, just three days ahead of National Suicide Prevention Week.

More widely known as the Yellow Ribbon Club, the local chapter of the prevention and awareness program, was formed by Holtville resident Margaret Strahm after her 19-year-old son, Aaron Strahm, took his own life in September 2000.

“It was earth shattering. It still is, and I think it always will be,” Margaret Strahm shared during a phone interview on Tuesday, Aug. 31. The club was scheduled to meet on Thursday, Sept. 2, with National Suicide Prevention Week on Sunday, Sept. 5 through Sept. 11.

In the aftermath of her son’s death, Margaret found herself having to travel to San Diego to attend support groups because of a lack of access within Imperial County. It was at one of these meetings that she discovered the Yellow Ribbon Project.

“I knew right away that I wanted to bring it to Holtville,” Margaret said of the program, “and that the people of Holtville would really benefit from a program like this.”

The Yellow Ribbon Suicide Prevention Program’s goal is to prevent suicide in teens and youths by making suicide prevention tools and support accessible. The organization has 7,889 program sites worldwide and purports to have saved 123,168 lives over nearly 25 years.

The program started in 1994 in response to the death that year of 17-year-old Mike Emme of Colorado. Mike committed suicide in his bright yellow 1968 Ford Mustang, which was his prized possession, according to the national group. The night before his services, his classmates made 500 yellow ribbons and attached cards that said, “Please don’t do this, please talk to someone,” along with phone numbers to call to get help. This simple act resonated and grew into the organization as we know it today.

Some 20 years after Margaret Strahm’s son’s death, she still works passionately for the program.

“I love the Yellow Ribbon Program. As long as I am walking, I am going to keep working on doing this. And when I can’t walk anymore, I’ll probably do it from a wheelchair,” she said.

With 48,344 suicides reported in the United States in 2018, according to the U.S. Center for Disease Control and Prevention’s National Center for Health Statistics, Aaron and Mike’s stories are hardly unique. That same year, the California Department of Public Health reported nine suicides in Imperial County, reminding us that this is a local problem, not just a national one.

A 32-year-old El Centro man, who asked only to be identified as “Martin,” due to privacy concerns, opened up about his struggles with his thoughts of suicide and suicidal ideation, the term psychologists use for the more than the passing thought of ending it all.

“I always felt lonely, as long as I could remember. I just never quite fit. I got really close to committing suicide in my 20s but chickened out at the last second when the knife hurt,” he said during an interview on Aug. 31.

Martin explained that he started to struggle again a few years ago, but the suicide of an old friend served as a sobering reminder of the larger effects of taking one’s own life.

“I hurt so bad, and I saw how bad our buddies hurt,” Martin explained. “I couldn’t do that to them again.”

While Martin said it took him a while, he did eventually seek professional help for his feelings.

“I didn’t happen overnight. I didn’t just wake up better after his death, but it scared me — scared me into fighting to get better,” he said. “I started talking to my friends, and then eventually my doctor.”

For many adults, finding resources and support can be a struggle, which is what makes events like the National Suicide Prevention Week so important. Events and outreach around the nation next week will be under the auspices of the American Association of Suicidology, which sponsored the week since 1975.

Despite being a sponsor of the National Suicide Prevention Week, the association made it clear on its website that suicide prevention is not just a weeklong event, but an ongoing struggle.

“The American Association of Suicidology believes we need to focus on suicide prevention every day, of every year. And we can do this by continuously spreading awareness, advocating for research funding, developing innovative and effective treatment tools, being kind, and helping to educate others on things like resources and warning signs. It’s time to get involved, but not just this week and not just the month.”

There were claims that suicides, especially among youths due to prolonged school closures and lockdowns that occurred across the nation for much of 2020 and into this year, had dramatically increased suicide rates, but there has been no empirical evidence to suggest that so far.

The United States has been experiencing an increasing suicide rate with each passing year since 2007, so an upward trajectory started long before lockdowns and school closures, with a steep 35 percent increase from 1999 to 2018, and a slight decline in 2019, according to the U.S. National Institute of Mental Health.

According to the NIMH, suicide is the 10th-leading cause of death in the U.S., claiming the lives of 47,500 people in 2019, the latest available national numbers. Local data was only available for 2018.

The available data so far don’t show an increase in the overall suicide rate in 2020. According to study published in April 2021 using data from 21 countries, suicide rates did not rise at the onset of the pandemic, and in several of countries — Australia, Canada, Chile, Ecuador, Germany, Japan, New Zealand, South Korea, and the United States — the expected suicide rate actually decreased.

A report by scientists at the National Center for Health Statistics found that the suicide rate in this country decreased by 5.6 percent in 2020, according to provisional data. Another study from Massachusetts saw no increase in the suicide rate from March to May 2020.

However, these sets of data should be taken with caution, as the authors of the cited studies warned that the data cover only the early half of the pandemic, according to the nonprofit Healthfeedback.org.

Still, Holtville’s Yellow Ribbon Club took the idea of continuing the message of support and awareness during such a difficult period to heart. Throughout the COVID pandemic, Strahm continued to facilitate virtual meetings despite plummeting numbers.

When in person and on campus, meetings averaged between 40 and 50 students, she said, but dropped to around five when distance learning began.

While she worried about stress and isolation students felt during the pandemic, she is optimistic about the upcoming year, already planning for her students to attend a mental health fair at Imperial Valley College in October, so Holtville’s Yellow Ribbon Club can continue its mission to raise awareness about suicide and suicide prevention.