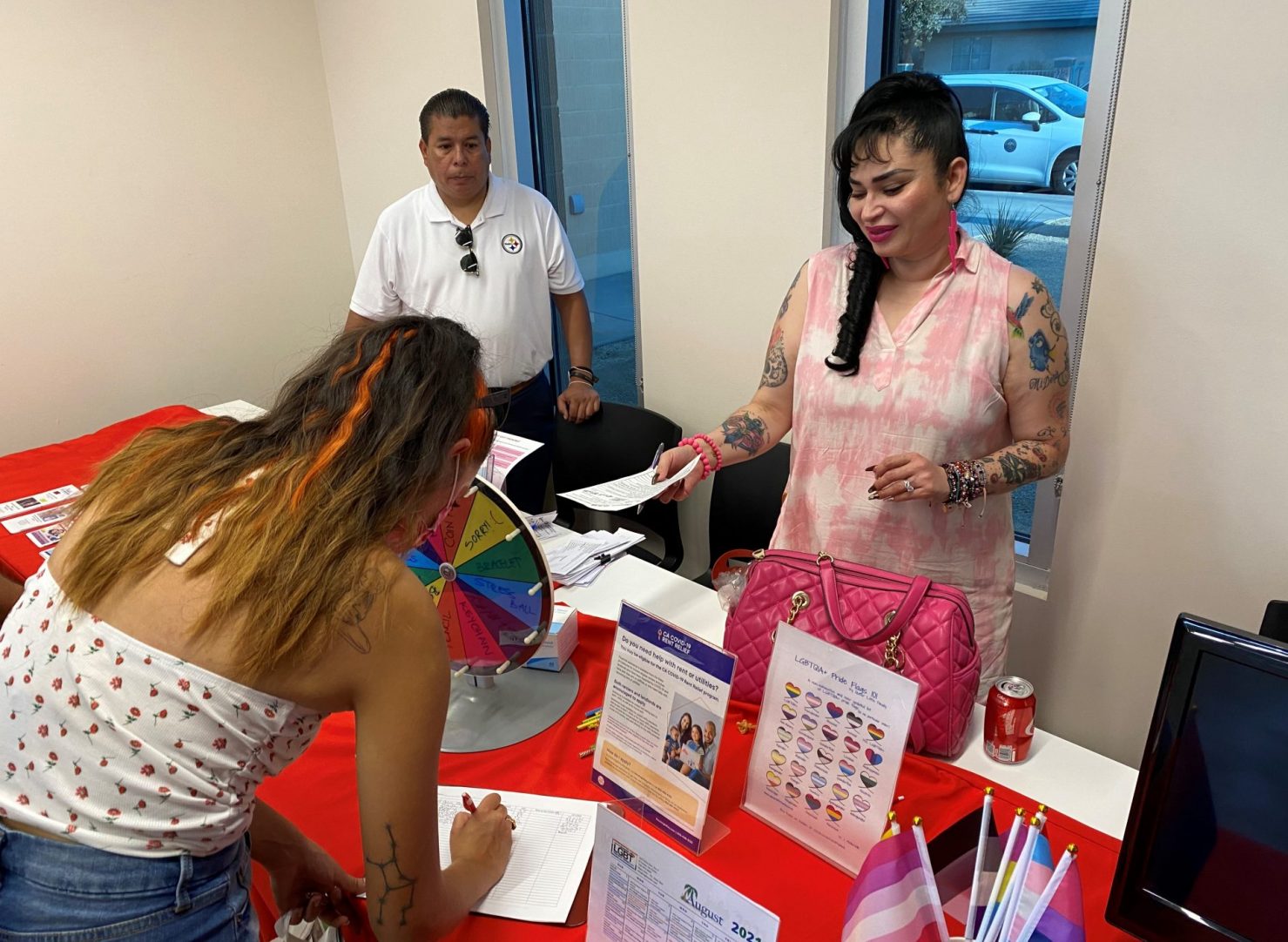 Bibiana Fernandez (right) and Carlos Labandera (left) of the Imperial Valley LGBT Resource Center sign a scavenger hunt paper for Jazmyn Horton-Alvarado (back to camera) at a booth set up to assist local residents to apply to the state's COVID-19 rent relief program. Since April, the center has used community outreach events, such as the one held at the El Centro Aquatic Center on Aug. 13 to help raise awareness about the program and assist with the application process. | MARCIE LANDEROS PHOTO
Home
COVID-19
In COVID-19Regional News

State is Allowing CBOs to Have Expanded Role in COVID Program

“Wishful thinking” is how county Deputy Executive Officer Esperanza Colio described the possibility that her repeated requests had prompted state officials to expand stakeholders’ participation in the COVID-19 rental-assistance program.

Nonetheless, she did express satisfaction that the California Department of Housing and Community Development is now allowing community-based organizations to provide a greater level of assistance to the program’s prospective applicants.

“I want to say it is the result of many people advocating to promote this program and to provide assistance to the most impacted eligible residents,” Colio said.

The state program, formally known as Housing is Key, provides rent relief to landlords and renters who have faced financial hardships due to the COVID-19 pandemic.

Yet, of the $13 million the state Department of Housing and Community Development has allocated for assistance in the Imperial Valley, only about $4 million in assistance has been requested, with a total of about $637,000 having been awarded as of Wednesday, Sept. 1.

And though multiple local community-based organizations have helped raise local awareness of the program, as well as assisted individuals with their applications, Colio had proposed to the state that more direct involvement by CBOs could help streamline the application and approval process.

“I’ve been asking for this for months,” said Colio, who is a member of the program’s advisory committee, which helps with the program’s design, advocacy, and promotion. “Finally, they’re buying into it.”

Ultimately, Housing and Community Development recently announced that CBOs can apply to the agency to provide an additional two levels of assistance, known as tiers, that were not among the three tiers that previously existed as options.

To date, six local nonprofits have been approved by the state to provide help corresponding with tiers 1 through 3.

Up until the recent addition of tiers 4 and 5, Tier 3 had allowed CBOs to provide the greatest level of aid, including helping impacted individuals fill out their applications.

Now, Tier 4 will deploy so-called “pop-up” events in the community, while Tier 5 will make use of door-knocking in targeted residential areas.

Both newly added tiers will help raise program awareness and require CBOs to sign up a certain number of households for appointments, as well as assist a similar unspecified number of households to complete their applications, either at the pop-up event or at their respective residences.

“The idea is to have ‘case managers’ ensure (applicants) have submitted everything,” Colio said about the expanded levels of service. “They’re going to need to have boots on the ground.”

“I honestly believe more would be better,” Colio said.

The reason that Colio had been pushing to have CBOs more directly involved in the application process was to help avoid the time-consuming correspondence that would ensue between the state and an applicant whenever discrepancies in the application were discovered.

By granting local partners more involvement with the final stages of the application process, much of the delays that stemmed from the state and applicants’ correspondence can be avoided, Colio said.

Failure to increase the number of potential and approved households in the county could result in the balance of the $13 million allocation being diverted outside of the county. Should that happen, it is also doubtful the county would qualify for some $10 million that is being proposed as part of the round 2 funding cycle, Colio said.

“If we don’t spend this money, we’re not going to get that second round,” she said. “That’s the saddest part. I don’t want the county to lose that funding.”

Since its approval as a local partner in April, the Imperial Valley LGBT Resource Center has been performing tasks associated with the first three tiers of the rental-assistance program.

A state grant it received for its assistance had allowed the center to hire two and a half part-time employees to help applicants fill out their applications, program coordinator Vincent Pollizzi said.

“We’re helping those that don’t have the required computer literacy with the process,” Pollizzi said on Aug. 24.

He estimated that since the LGBT Resource Center started its technical assistance, it has helped about 20 to 30 individuals apply for the COVID-related rental-assistance program.

In the normal course of its outings in the Valley, center representatives have also left flyers about the program at grocery stores, laundromats and coffee shops.

It recently hosted a community outreach event at the El Centro Aquatic Center on Aug. 13 to help raise awareness about the program and assist residents with the application process. In spite of those efforts, much remains to be done.

“After all this time we still run into people who say they had no idea about the program,” Pollizzi said.

The program has two options available to apply. In the first scenario, the tenant and landlord apply for the program together. If the tenant has paid at least 25 percent of their rent in the last year, they’re eligible to receive assistance.

If landlords are not willing to apply with the tenant, the tenant can still apply to receive 100 percent of their unpaid rent that accrued during the same time period. The payment would be made directly to the tenant.

Should a landlord refuse direct payment from the state, the renter would then pay it directly. Although it is a much smaller amount, the program states that as long as a renter is paying 25 percent of their rent, they’re able to stay in their residences under the recent legislation, Senate Bill 91.

(This article was updated at 11:15 a.m. Thursday, Sept. 9, to correctly state that under the Housing is Key program, a tenant is eligible to receive 100 percent of their past due rent during the timeframe that the program covers, even if a landlord is unwilling to jointly apply with them.) 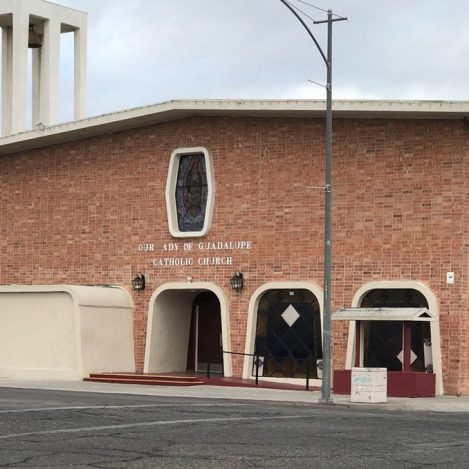 Parishioners Join to Help Our Lady of Guadalupe