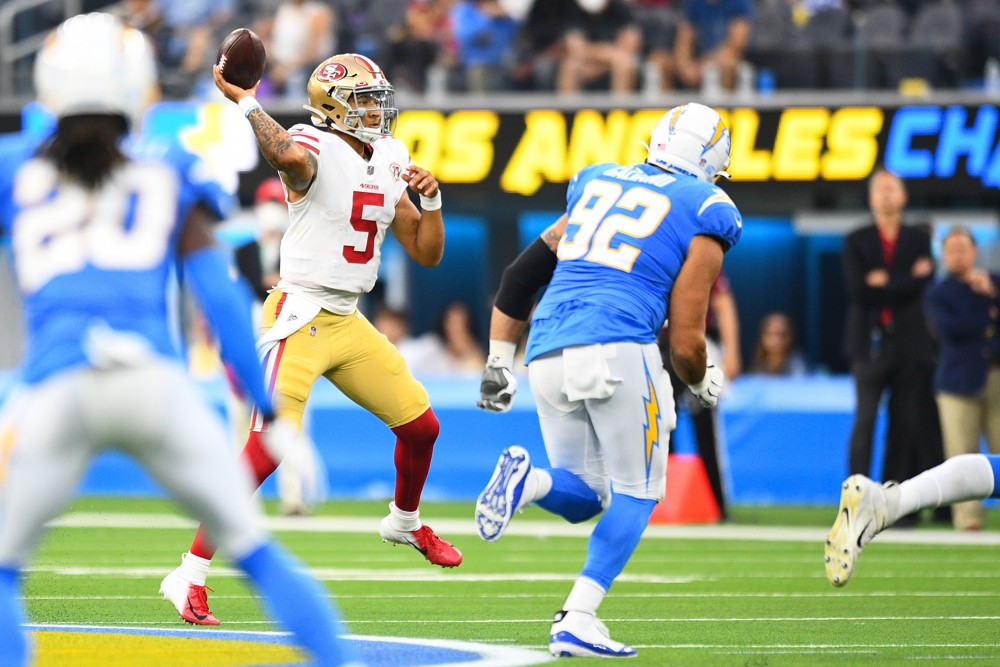 San Francisco 49ers quarterback Trey Lance throws a pass during the preseason game with the Los Angeles Chargers on Aug. 22 at SoFi Stadium. Photo by Brian Rothmuller/Icon Sportswire
In Sports

The Chargers and Raiders were both charter members of the American Football League when they entered the NFL in 1960. In fact, the very first San Diego home game for the Chargers was against the Raiders.

The rival teams’ games were often closely contested and closely followed religiously by their fans. But given the game-changing decisions a few years ago by the ownership of both teams, this year’s season could well show, say the experts, how fate and bad planning have given the Raiders a lopsided victory over the Chargers in terms of fandom and financial gain as they both play in their new stadiums.

Longtime sports columnist Nick Canepa, who writes for the San Diego Union-Tribune, has criticized the team’s ownership, particularly Dean Spanos, the club’s president. Spanos didn’t try hard enough to keep the team in San Diego and then blew other options, Canepa has reported previously in his column.

“Spanos made a huge mistake not going to Vegas, probably because he didn’t have the spine to be a pioneer,” Canepa wrote in an email. He has also roundly criticized the city’s leadership, particularly former San Diego Mayor Kevin Faulconer’s office, for doing a lousy job in finding a way to keep the home team from moving 125 miles north to Los Angeles.

To briefly recap, the Chargers’ 2017 decision to leave San Diego capped several years of failed efforts to build — and finance — a modern football stadium agreeable to both the team and the city.

The team’s announcement it was leaving came just two months after San Diego voters rejected a tax increase that would have financed a Chargers proposal for a joint stadium and convention center annex located downtown.

In its defense, the Chargers claimed it had offered up at least nine different stadium proposals over the years, although many lacked firm strategies for financing them.

While Canepa has said not moving the team to Nevada was a “colossal blunder,” longtime Spanos family friend Mary Pappas, owner of Athens Market, says she never heard any mention of Las Vegas from the team’s late family patriarch, Alex Spanos. That’s because “Alex loved San Diego and tried, starting in the 90s, to work with the politicians” to stay here.

The “old man,” she remembered, would sit near a corner window of her downtown San Diego restaurant on Tuesday evenings enjoying the Greek food. She says she blames the politics of the time for the move, saying “the city lost out big time.”

The Chargers’ media office was contacted to comment on this story but has not responded.

However, a longtime Chargers employee, hired during the Junior Seau era, offered some insights into the Chargers and Raiders efforts to find new homes.

“Spanos had businesses and a residency in Vegas for years even before the stadium stuff,” said the staffer, who asked that he not be identified by name. He and others we spoke with believe Spanos had an opportunity to at least check out Las Vegas and should have done so after the NFL ownership made clear that the Rams ran the Los Angeles market. The Chargers employee said he wasn’t alone in thinking that “Dean Spanos is not a very good businessman.”

Unlike SoFi stadium in Inglewood that is shared by the Los Ángeles Rams and Chargers and was privately financed, the $2 billion Allegiant Stadium in Vegas relied in part on $750 million in public funding via a 0.88% hotel room tax.

The Raiders will play their first regular season home game Sept. 13 against the Baltimore Ravens. The Chargers will square off against the Dallas Cowboys at SoFi Stadium on Sept. 19.

Alan Snel of LVSportsBiz.com says that many teams over the years have had their eyes on the Las Vegas market.

“So many major league teams in all sports have sniffed around Las Vegas looking for a potential subsidized stadium deal or site through the years,” he said. But I have not heard about the Chargers looking at Las Vegas as a potential new home. It doesn’t mean it didn’t happen — I’m just not aware of it.”

Las Vegas Mayor Carolyn Goodman’s office did not address questions about whether the Chargers ownership ever approached the city about a future home for the team. She did say through her aide, Jace Radke, “Having had a home in San Diego for more than 40 years she has often spoken of going to Chargers games in the past, and that she always thought of the Chargers as her team. Now she is a Las Vegas Raiders fan.”

Like others, longtime 10News sportscaster Ben Higgins says he doesn’t remember the Chargers looking seriously to Las Vegas. He said “the Chargers’ loss (of their own exclusive stadium) has been the Raiders’ gain.”

He added, “It was a big miscalculation by Spanos, he felt he would keep his fan base in San Diego. The move to Los Angeles alienated more San Diego fans than a move to Las Vegas would have done.”

Higgins, who also hosts a morning talk show on 97.3 The Fan, notes the irony that both teams will now be playing this season for the first time in their new stadiums. When the Raiders and Chargers began their respective searches for new homes, who could have anticipated this outcome, playing out before their new hometown fans this year.

The relevant scoreboard for this rivalry is financial, particularly given the billions of dollars in play for the NFL teams. Checking the current and past Forbes rankings of NFL teams’ value, it turns out that 10 years ago, the San Diego Chargers were a more valuable franchise than the Oakland Raiders. This year’s “Scoreboard” tells a far different story. The Las Vegas Raiders are now worth $3.4 billion and the Los Angeles Chargers about $500,000 less.

Higgins believes “If Spanos had a chance to do it over again, he would have stayed in San Diego or moved to Las Vegas. LA would have been his last choice.”

This story originally appeared in Times of San Diego. JW August is a San Diego-based broadcast and digital journalist.

Times of San Diego is part of the CalMatters Network.

Previous
AB 1021 Made Toothless, But Will It Bite Again? 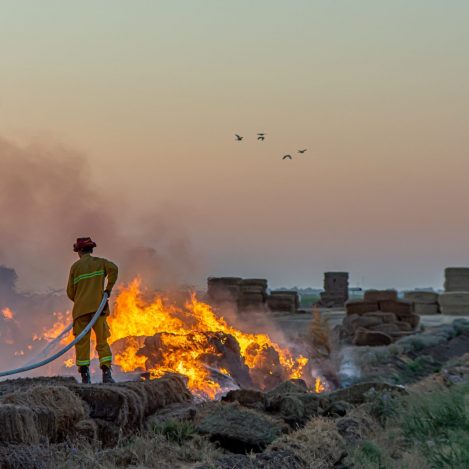