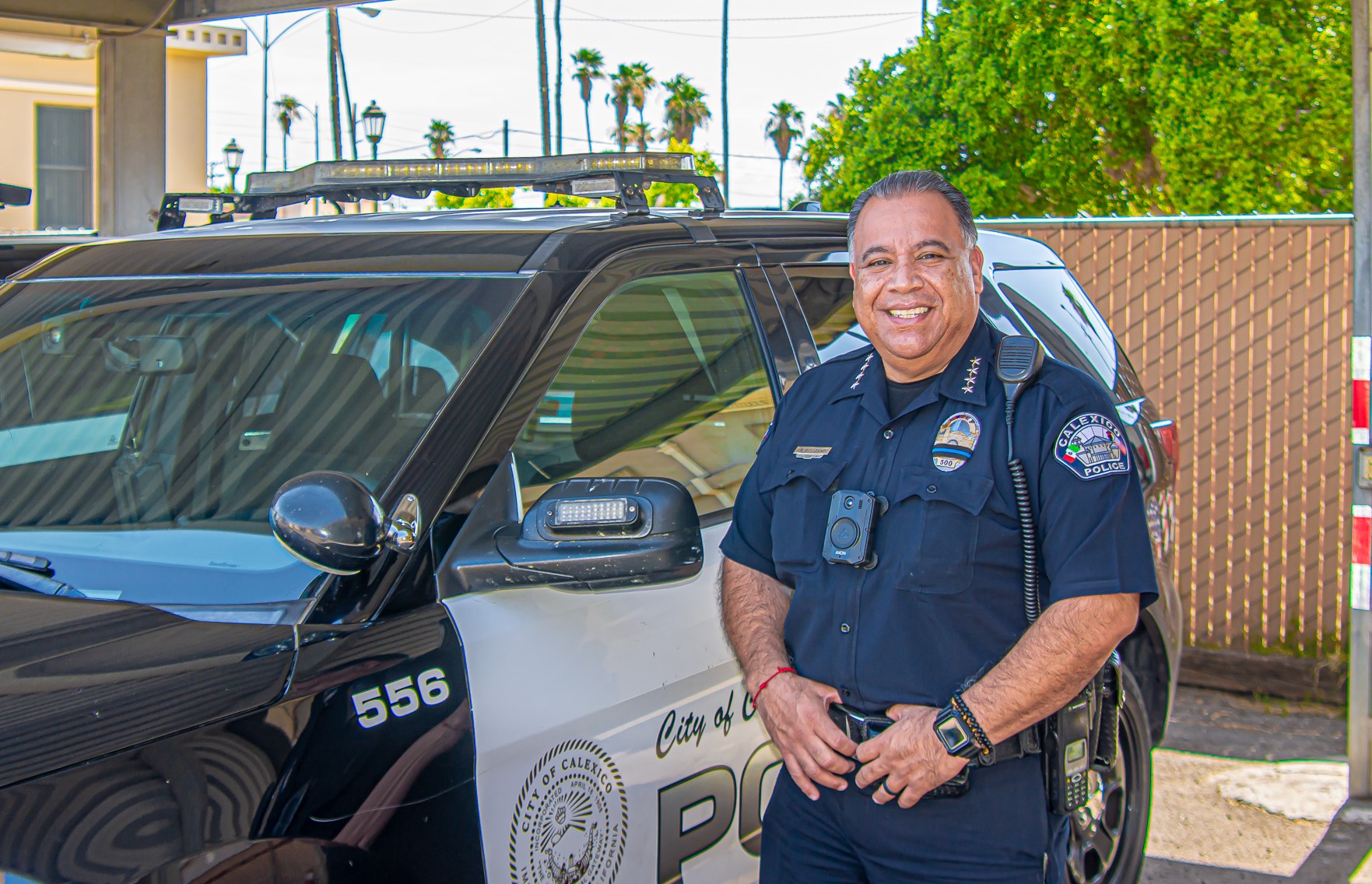 Calexico Police Chief Gonzalo Gerardo stands next to a patrol vehicle in July. Gerardo, known as “Chalo” by many in the community, publicly announced on Saturday, Aug. 28, his intention to retire at the end of his contract in December after more than 30 years. | CAMILO GARCIA JR. PHOTO
In Featured StoriesLocal NewsPublic Safety

After 30 Years with Calexico Police Department, Gonzalo Gerardo is Ready to Call It a Career

CALEXICO — Loss and mortality, these are concepts — or rather, emotions — that have weighed heavily on Gonzalo Gerardo over the past year, as he reaches the end of 30 years in a career where talk of feelings can be frowned upon.

Yet anyone who knows “Chalo,” Calexico’s police chief of the past three and a half years, knows he is a man who loves people, likes to talk, and has no problem with wearing his heart on his sleeve.

This is where Chief Gerardo finds himself today, about three months away from retirement, which he announced publicly for the first time on Saturday, Aug. 28, in his usual off-the-cuff sort of way, during an event in El Centro.

“I’m going to make an announcement next Wednesday (Sept. 1) … I plan to retire this year after 30 and a half years of service for the city,” Gerardo said in the midst of a three-minute speech welcoming a new pastor to the Imperial Valley. “But I’m not going anywhere.”

In his brief comments, he conveyed a kind of sadness only implied at the event, but he later explained in a wide-ranging interview with this newspaper on Saturday afternoon that COVID, the death of his neighbor, and the desire to spend more time with his loved ones were factors in his decision to walk away.

“One of the things that really did it is, I’ve been seeing a lot of young police officers dying, older police officers dying because of COVID or accidents, or something like that, and I figured that it was time for me to (go) … Hopefully, God willing, he will give me a little bit more years after I retire to enjoy my retirement,” Gerardo said. “I just don’t want to be a statistic.”

In particular, the June 26 death of 25-year-old rookie Imperial County sheriff’s Deputy Anthony Redondo was a wake-up call. Redondo and Gerardo were next-door neighbors in Imperial, and they often saw each other in the morning on the way to work, where they would chat.

“It always affects you every time an officer dies, but it really hit home when Deputy Anthony Redondo died,” Gerardo said. “That was me 30 years ago. … He had asked me about doing this for 30 years, and I remember telling him the day before (he died), I said, ‘You know, grasshopper, 30 years will be knocking on your door before you know it.’

When Gerardo moved into the next phase of his career around 2006 or 2007, when he went from patrol officer to detective, he became a “two cell phone” cop, this is, he was nearly always on call and the connection to family suffered, although his wife and older children understood the sacrifices, he said.

“I’ve always been a provider, but I haven’t had time for them,” he added.

Gerardo also has a mother in Calexico who he speaks with on the phone far more than he sees in person, and he wants that to change. Plus, he said he would like to be of more help to his wife.

At the end of his current employment contract with the city, Gerardo will have 30.5 years and be fully vested in his retirement, so it’s the opportune time. But he hopes to help the city find his replacement, even help ease the transition, offering to stay on past December, if need be, which is something he told City Manager Miguel Figueroa when Gerardo quietly tendered his letter of resignation on Aug. 16.

Saturday morning’s announcement at the Imperial Valley Social Justice Committee event was unplanned, Gerardo said, but it was on his mind. Earlier that morning, he had informed the Police Department staff of his intentions to retire and distributed a copy of his resignation letter. The members of the Calexico City Council also knew, but everyone apparently had agreed to keep it relatively quiet until the chief felt comfortable making the announcement.

The plan, Gerardo and Figueroa said on Saturday afternoon, was for the chief to read his letter to the community during the City Council meeting on Wednesday evening, which he will still do.

Although this will cap a career that is officially considered 30.5 years, which started when he was sworn in as a full-time patrol officer at age 25, the reality is Gerardo had some connection to law enforcement, with the goal of becoming a police officer since he was a teenager. He started as a Calexico police explorer in 1984 at age 17 and later became a reserve officer.

“You know, it’s one of those things where I say, you know what, I think I’ve given way too much. I have given more than half my life. … I’ll be 55 in October,” he said.

There is much to be done before Gerardo calls it a day, and he is focused on the task ahead, which is to put the pieces in place to deal with some staffing issues — namely the crisis-level staffing problems with his emergency dispatchers — and helping in the recruitment process for his successor.

“These next four months are pretty crucial, crucial to try to wrap up everything that I’m doing, all the projects that I have been attending to. I want to help the city with the transition to a new police chief, so I offered them that I would help them when it comes to whoever they pick,” he said. “I also told the city manager and some of the council members that I would like to be part of the process. And not so much to give my input on who should be the next chief, but maybe the process on what their next chief, what they should be looking for, because of the current situation with the budget.

“My whole thing is, I want them to make sure that the next chief that’s going to apply understands that the city of Calexico’s financial situation is not, you know, it’s not bad, but it’s not like there’s a surplus of money for the department,” Gerardo explained. “He’s got to understand that he’s coming into a department that is short staffed. I plan on trying to get more staff, especially my dispatchers. So, I’m going to be pushing for dispatchers. … I want my people prepared.”

City Manager Figueroa explained on Saturday that the recruitment process for a new chief will start right away, but not with any sense of urgency, but with the notion that there is time to find the right fit for Calexico and nothing has to be rushed.

“We’re going to go through an open transparent process for the recruitment of the next police chief, and we’re going to take our time in the next three months while the chief is still here, so we can find the replacement the right way,” Figueroa said.

Per the state retirement system for public employees, how long the chief remains on the job past December is limited. After that, it’s unclear exactly what he will do.

He has been offered jobs outside law enforcement, and he does believe he will hold at least some part-time position in retirement; anything and everything is on the table at this point.

“I told my wife, don’t let me go back to work on any full-time job, but nothing serious,” Gerardo said. “I mean, I might do it (work) for fun, for a little bit extra cash, maybe to fix the truck that my father-in-law left my kid when he passed away. 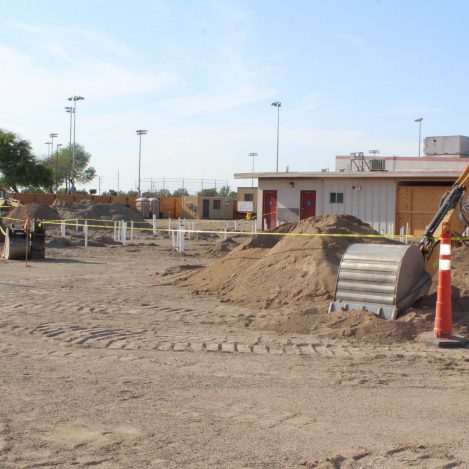