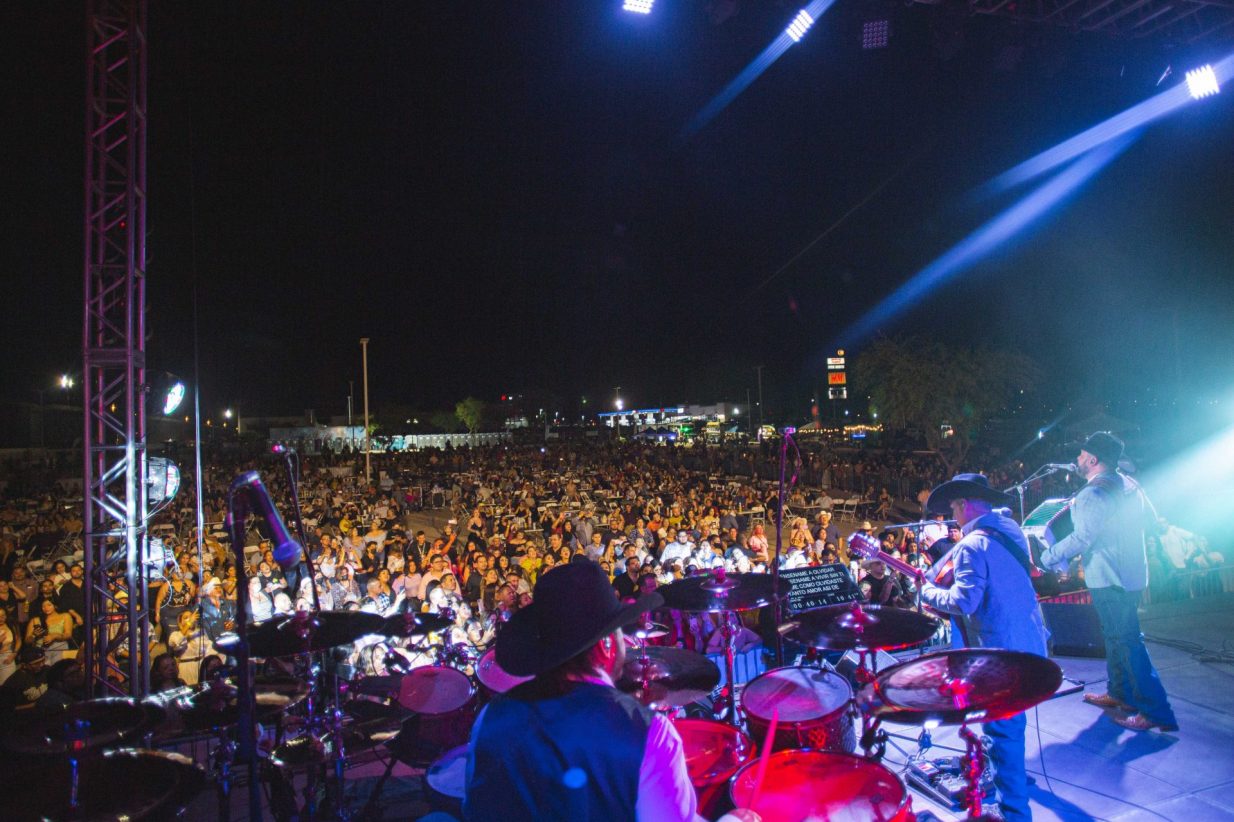 CALEXICO — Embracing its international following, native Tejanos, or the Texas-born members of Intocable took the stage in an empty lot east of the Gran Plaza Outlets, in the shadow of the U.S.-Mexico border fence and sent an immediate shoutout down south.

Neither a new surge of coronavirus fortified by the highly contagious Delta variant, nor an imposing border fence, with its 30-foot rusty iron slats, could temper the enthusiasm of the international fanbase that Intocable has amassed over its 30-year career.

An estimated crowd of 1,200 to 1,500 people spread out among VIP tables and general admission seats on the Calexico side, while a dedicated 30 to 40 Mexicali couples, families, and friends sang and danced as cars sped by on busy Avenida Internacional.

“Mexicalenses” Sara Montoya and her family had been waiting on the other side since 7 p.m. Her husband, Eddie Morales, said, “Nos estamos pasándola bien (We are having a good time).”

Their children, Jasmine and Juan, also known as “Eddie Jr.,” pulled themselves up the railing of the fence to get a better view of the band.

Several hundred feet north, as U.S. Border Patrol vehicles slowly drove past, Intocable played crowd pleasers like “Aire,” “Fuerte No Soy,” and “¿Y Todo Para Qué?” for both audiences, with the band inviting, occasionally waving, and urging the crowd to sing its signature blend of Tex Mex and norteño back to them.

Those on the U.S. side danced and sang, but COVID loomed large over this border city, the hardest-hit region in Imperial County since a global pandemic was declared in March 2020.

Now, as cases across the United States continue to rise, hospitalizations increase, and the county is under a mandatory mask order for indoor gatherings, there were equal parts worry and anger in the air in Calexico’s first major event in nearly a year and a half.

“The COVID situation sucks; I have missed community gatherings,” said Calexico resident Diego Corrales, who had participated in some of Gran Plaza’s popular “Art Walks” in the past.

For he and his girlfriend, Melissa Angulo, also of Calexico, the opportunity to socialize was hard to pass, and they even convinced their nervous mothers to join them.

“There’s enough space at this event to remain separate if we want to, and that’s what we told our moms,” Corrales added.

Cesar Casillas, general manager of Gran Plaza Outlets, said on Friday night that he had a lot of faith that the event would be a success.

“With this event, we want to reintroduce entertainment in the Imperial Valley. For the past 18 months, we’ve been confined to our homes,” Casillas said. “I think it’s about time for people to go out safely.”

The space reserved for the concert accommodates 15,000 people, Casillas said, but Gran Plaza’s target goal was only 1,500.

“People will be able to social distance comfortably. This won’t be like Baja Beach Fest (in Rosarito.),” Casillas added. Ticket sales were restricted to a modest number to ensure the crowd had plenty of room for concert goers’ personal space.

Despite venturing out among a mass of people, some attendees balanced a healthy dose of anxiety with the need to have some sense of normalcy, like the Aceves family of Calexico.

The eight-person family wanted to enjoy each other’s company, they said, at Calexico’s first major event since Gov. Gavin Newsom lifted most restrictions on public life on June 15.

Attendees at the concert like Ashley Salgado of El Centro and her group of friends still had concerns over the virus. In their 20s and mask-less, they expressed that they were “a little stressed” being at such a large event.

Nevertheless, they said they wanted to come out and enjoy Intocable’s music — the young women felt comfortable that could maintain their distance from other groups.

Meanwhile, on the other side of the fence, Mexicali couple Ana Isabel Bojorquez Romo, who was wearing a pretty red dress, and Sergio Rodriguez, in a smart blue button-up, stood and peered through the fence panels.

The couple was elated to be there, appreciating the breeze on Friday night, and when asked if they would be dancing, Bojorquez and Rodriguez laughed and agreed, nodding their heads, and saying, “Sí,” in unison.

Although COVID was the furthest thing from the young couple’s mind, it was very much on the mind of Intocable’s Ricky Muñoz.

He acknowledged from the stage that the Grammy Award-winning band’s members were vaccinated and felt safe and secure going forth with its tour, a 30-date swing through the Southwest U.S. and parts of Mexico that kicked off in Calexico, with local band, La Chambita, as opening act.

Muñoz understands the issues with vaccine hesitancy in the U.S., urging the audience to get vaccinated, and expressing the sobering thought that this country was still in the grips of a global pandemic.

Much like a microcosm of this nation, it was clear Muñoz’s words were landing with some and missing with others, as some people cheered and some were indifferent, turning away and chatting with friends and family.

While many in attendance could be seen keeping their distance throughout the night and others kept their masks on, masking in outdoor spaces is not mandated, merely recommended for the unvaccinated by the U.S. Centers for Disease Control and Prevention.

Those thoughts and concerns of COVID quickly floated into the ether, however, replaced by joy and togetherness as Intocable’s graceful melodies over those ubiquitous polka-like rhythms that mark the norteño style raised the crowd to new heights.

Hands peeked through the vertical slats of the fence in the south, while those on the north side made it to a “dance floor,” waving to the band and cheering — both sides locked in time with Intocable’s timeless music.

Muñoz spiritedly declared into the mic, “Seguimos cantando como si la frontera no existe,” — or “We will keep singing as if the border doesn’t exist.” Later, when Intocable finished its final song, Muñoz said: