Spanish
Mayor Karin Eugenio walks down an Imperial street in a scene from the 10-minute state of the city address that was debuted during the City Council meeting on Wednesday, Aug. 18. | SCREEN CAPTURE
In Regional News

IMPERIAL — Bolstered by population growth of more than 37 percent from 2010 to 2020, a median income of $83,000 and a median home price of $292,500, Imperial Mayor Karin Eugenio promised more remarkable things to come during the city’s 2021 state of the city address.

“As the city of Imperial emerges from the pandemic and enters a new normal, we are poised to have what will likely be our greatest decade ever,” Eugenio said in a filmed address, which debuted during the Imperial City Council meeting on Wednesday evening, Aug. 18. “And this is only the beginning of the journey.”

The 10-minute film produced by Conveyor Group, an Imperial-based marketing company, highlighted the city’s accomplishments over the past year, but also discussed some of the stark realities of municipal governance during a global pandemic that affected the bottom line.

Eugenio referred to the city as “one of the state’s fastest-growing” and shared that Imperial had reached a population of 20,289 residents, which was up from 14,758 in the 2010 Census. Actual 2020 Census data show Imperial with 20,263 residents, a 37.3 percent increase. Eugenio’s estimate was from the Jan. 1, 2021, projection from the state Department of Finance.

The city, she said, issued 571 building permits, which is estimated to be worth $50 million. She also shared with the community that Imperial’s Travel Park, the city’s public transportation transfer terminal on Barioni Boulevard east of Highway 86, received an Award of Excellence this year from American Society of Civil Engineers.

Yet Mayor Eugenio also acknowledged that COVID caused a fiscal impact of $2.3 million to the general fund, which for other municipalities has come by way of decreased sales tax revenue and programmatic revenue. Rather than focusing on that loss, Eugenio quickly began to talk about the $145,000 that the city awarded in business grants, and the $81,000 that it gave out in utility-assistance grants, while taking many services and events online to keep residents safe but still connected during the pandemic.

Eugenio went to on to announce the city’s plan for the upcoming year, including the opening of a new wastewater treatment plant, which was scheduled to go live this month but has been pushed back to September, Assistant City Manager Alexis Brown clarified in a phone conversation on Thursday, Aug. 19.

The mayor also announced that the city would see park and landscaping projects in the coming year, along with a new post office, a McDonalds, Imperial’s first Starbucks, and the completion (in first quarter 2023) of the “Ghost Hotel” on the northwestern corner of Neckel Road and Highway 86.

During its meeting Wednesday, the City Council unanimously approved the purchase of furnishings for the second phase of the Imperial Public Library improvement project.

The purchase will include rolling shelves and benches for the kids’ area, which will total $21,135. The purchase was included in the fiscal 2021-2022 budget approved on June 16.

Residents Gabriella Villa and Veronica Martinez reached out to the city to request that the requirement to wear masks be reinstated in the library. The city did not respond to the comments, since a masking order was reinstated by the county public health officer on Tuesday, Aug. 17.

The City Council also voted to approve updates on city policy when it comes to fees for utilities the city provides. This will include a new .5 percent fee per month for customers on their delinquent bills and a reduction of reconnection fees down to $45 from $50 during regular business hours, and down to $120 from $125 after hours.

The city will also transfer fees and credits from one account to another if a customer starts a new account at a new address. If a customer simply closes an account, they will continue to be issued a refund or a bill as the situation requires. There is also a new policy that any payment is received after 4 p.m., either electronically or through a physical drop box, will not be posted until the next working day.

The council authorized the city to start to get bids for the removal and replacement of four maintenance holes on Second Street, which have fallen in disrepair after years of use.

This project is also in anticipation of another project to rehabilitate Second Street scheduled to start later this year, which will be funded by the Imperial County Transportation Commission. Each maintenance hole will cost $14,000, bringing the cost of this project to $56,000.

The city voted to redo the cement around Imperial’s wastewater treatment plant’s influent pump station, which had been damaged during the recent construction of the new plant.

Rather than just patching the cement, the city elected for the contracting company who worked on the plant, W.M. Lyles Co., to install new pavement around the pump station. The cost of this project will be $32,561.07, but W.M. Lyles Co. will be issuing a $21,000 credit to offset the cost of damages the company caused, making this project cost the city $11,561.

The city received notification that due to the support of Congressman Juan Vargas, D-Chula Vista, and Sens. Dianne Feinstein and Alex Padilla, the Highway 86 improvement project, which includes new bike lanes, new sidewalks, and intersection improvement, will have an increased budget of $5 million, pending final approval.

This project is being funded by the Transportation and Infrastructure INVEST in America Act, which is aimed at modernizing roads in America. The city voted to amend the existing contract with CR Associates to account for the possible new money. CR Associates is handling the planning and design of the project.

Imperial resident Eric Lopez wrote to the city, questioning why with the city wasn’t re-bidding this project with this possible increase in funds. Assistant City Manager Brown explained that since they are only contracting with CR Associates for services, not construction, this contract was not required to be rebid, but there will be a bidding process when they get to the construction portion of the project. 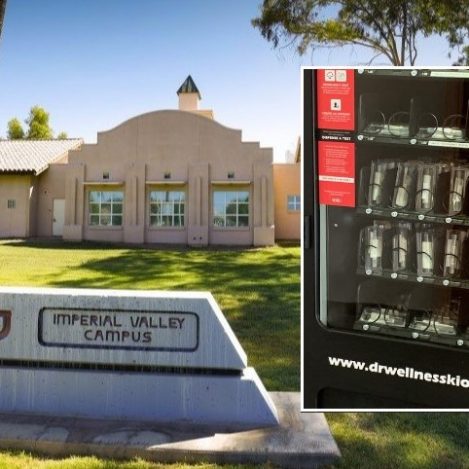