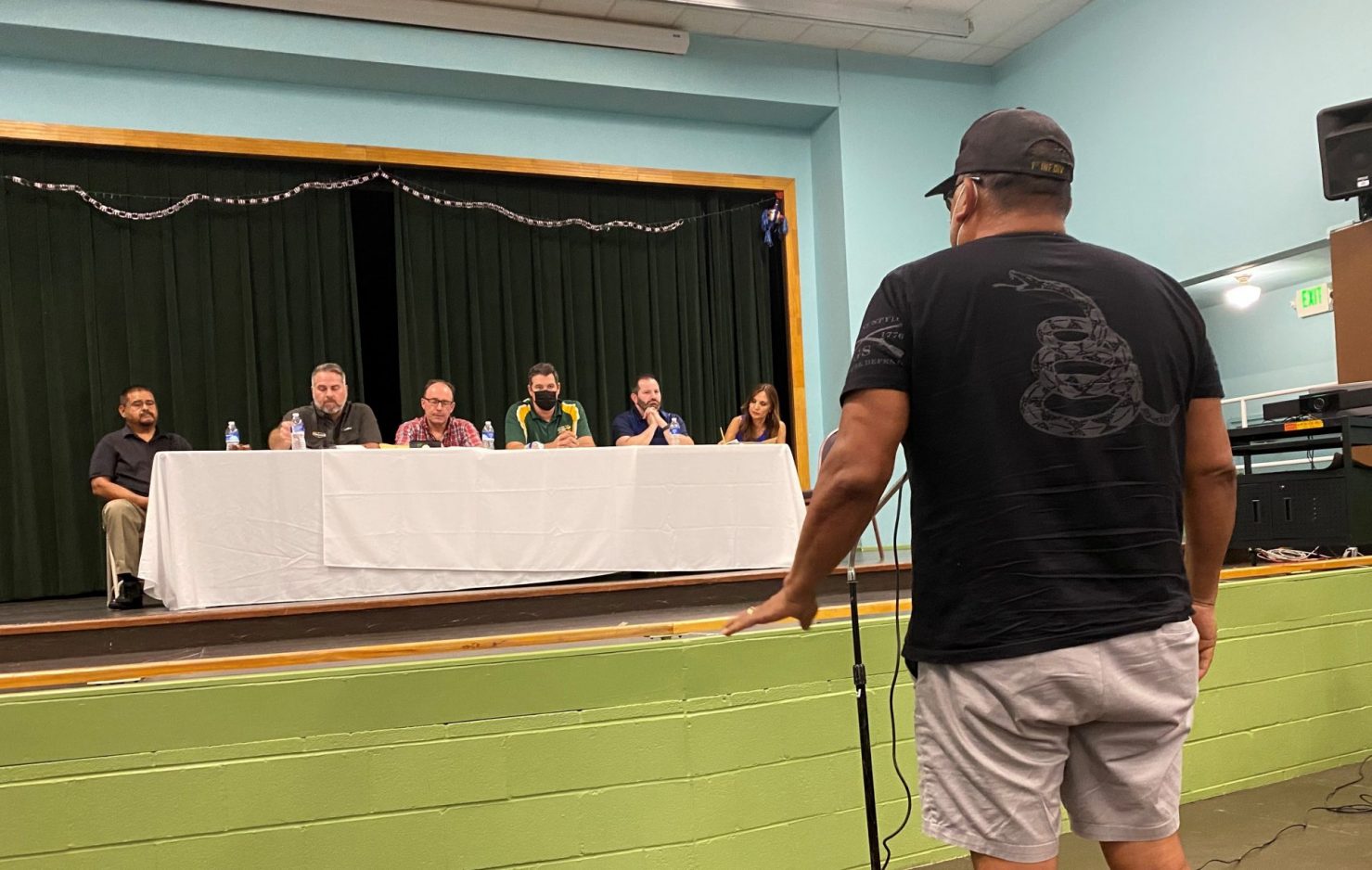 Jose M. Gomez questions the Holtville Unified School District board on why they can cite dress code violations on the "Don't Tread On Me" shirt that he was wearing but they cannot enforce the mask mandate. Gomez was one of about a dozen people who spoke during public comment at the Holtville school board meeting on Monday evening, Aug. 16, in Finley Elementary School’s auditorium. | MARCIE LANDEROS PHOTO
Home
COVID-19
In COVID-19Regional News

Those Against Holtville Mask Decision Sound Off

HOLTVILLE — For almost an hour and a half, it was the “other side” in Holtville who made their voices heard in the debate over California’s masking mandate during a school board meeting inside Finely Elementary’s auditorium on Monday, Aug. 16, less than a week after the board decided to selectively enforce the state order.

The issue was not part of the regularly scheduled Holtville Unified School District meeting agenda for Monday night, but the public comment portion of the meeting seemed to serve as a continuance of the Thursday, Aug. 12, special meeting in which the board decided, 4-1, to comply with the state’s mask mandate, but not take any corrective action against students who come to school without wearing a mask.

On Monday evening, about 50 people spread out in the auditorium, where about a dozen people took the mic to say their piece, three quarters of whom spoke out against the previous board decision.

The issue is due to spill over into yet a third meeting, when school officials scheduled a special meeting for 5:45 p.m. (open session) Wednesday, Aug. 18, inside the school district board room, 621 E. Sixth St. There is no action calendar on the agenda, only public comments and a joint informational presentation from the Imperial County Public Health Department and Imperial County Office of Education. No other information was available.

Opening speaker on Monday evening was Bianca Padilla, a former Holtville City Council member who set the tone for the evening, which would include fiery opinions on an issue already decided, at least for now.

“OK, I am going to make an educated guess here, that nobody on this board is currently going to school or working at a job that requires you to be in a room for six hours a day or more, with 20 to 30 people at all times, that you do not know or choose to be with,” Padilla said.

“I am guessing that most of you are self-employed and have the freedom to work from home, or work from a chosen office, and to go out and about as you see fit in your day. I also know for a fact, that you all had the choice to get vaccinated against COVID, and I am guessing that some of you board members probably did,” she added. “My son is 5 years old and getting ready to start kindergarten. He doesn’t have any of those choices.”

While Padilla expressed empathy with the difficult position the school board is in, she, along with others in the community, encouraged the school board to “make the right choice” by putting public safety before personal choices.

The family of the sole Holtville Unified School District trustee to cast the dissenting vote against the board modified approach to the mandate, Jared Garewal, attended the meeting and several of them spoke.

Abby Garewal, a recent graduate of Holtville High whose sisters still attend school in the district, stepped up to microphone to speak to the board about how poverty rates and high rates of respiratory disease in our county make our community vulnerable, making the school board’s choice even more dangerous.

Abby’s uncle, Justin Garewal, was also in attendance, demanding to know what the school board’s plans were if the state cuts off funding because they are not enforcing the mandate, or if the school is sued by the parent of a student who contracts COVID.

Javier Ramos, another family member and Holtville native, and current Imperial Unified School District educator and administrator, questioned the school board about why students who did not want to wear a mask were not expected to use the independent study program that Holtville already has developed. This program, he claimed, had been so successful that Imperial Unified School District was modeling their programs after Holtville Unified.

Speakers were not limited to members of the general public. Several teachers spoke, among them Crystal Arias, a fourth-grade teacher at Finely Elementary, shared that her niece and nephew have been transferred out of the district, despite all of her family having attended school in Holtville, because they no longer feel safe after the school’s announcement.

She went on to challenge the school board, and the community at large, as she finished speaking.

“Please board, come to my classroom. Because in the six years I’ve been here, not one of you — and some of you I have had your children — has visited my classroom. To the community, you are welcome to come visit my classroom, to see how amazing Holtville kids are at following for your safety. Thank you,” Arias said.

The other side of the debate, those who support the school board’s decision to not enforce the mandate, were also in attendance, though several requested not to be quoted by the newspaper, while others chose not to approach the microphone directly to voice their feelings, instead speaking from audience.

Yet they were present at a public meeting and choose to speak on the mic and give their names. One was Stacy Hoyt Britschgi.

“I am a cancer survivor, and I choose to not wear a mask, because I need to build up my immune system. It is a personal choice,” Britschgi said. “Don’t punish me or my kids for choosing not to wear one.”

While a few of the supporters did question the effectiveness of masks, and the danger COVID actually poses the children, the overwhelming majority of their supporters expressed that they simply wanted to be able to choose what was best for their child, without the school or the government telling them what to do.

Not all the speakers participated directly in the debate.

Holtville Mayor Mike Goodsell, who spoke to the school board from his capacity as a teacher at Holtville High School, suggested that the school board take the time to look at the data from reopening and summer school to help inform their decision on how safe it is to not enforce the mandate.

He urged them to put aside their differences, and to come together as a community, to get through the pandemic.

After the meeting, school board were asked for follow-up comment, to which Trustee Kevin Grizzle said it was too early in the process to comment on anything that was said during this meeting. 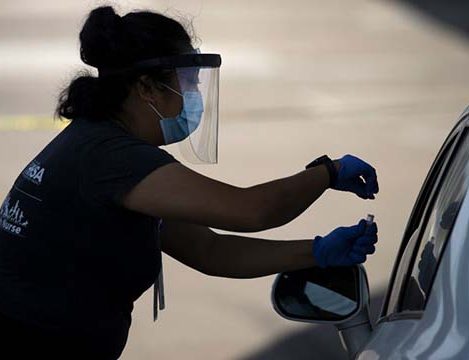