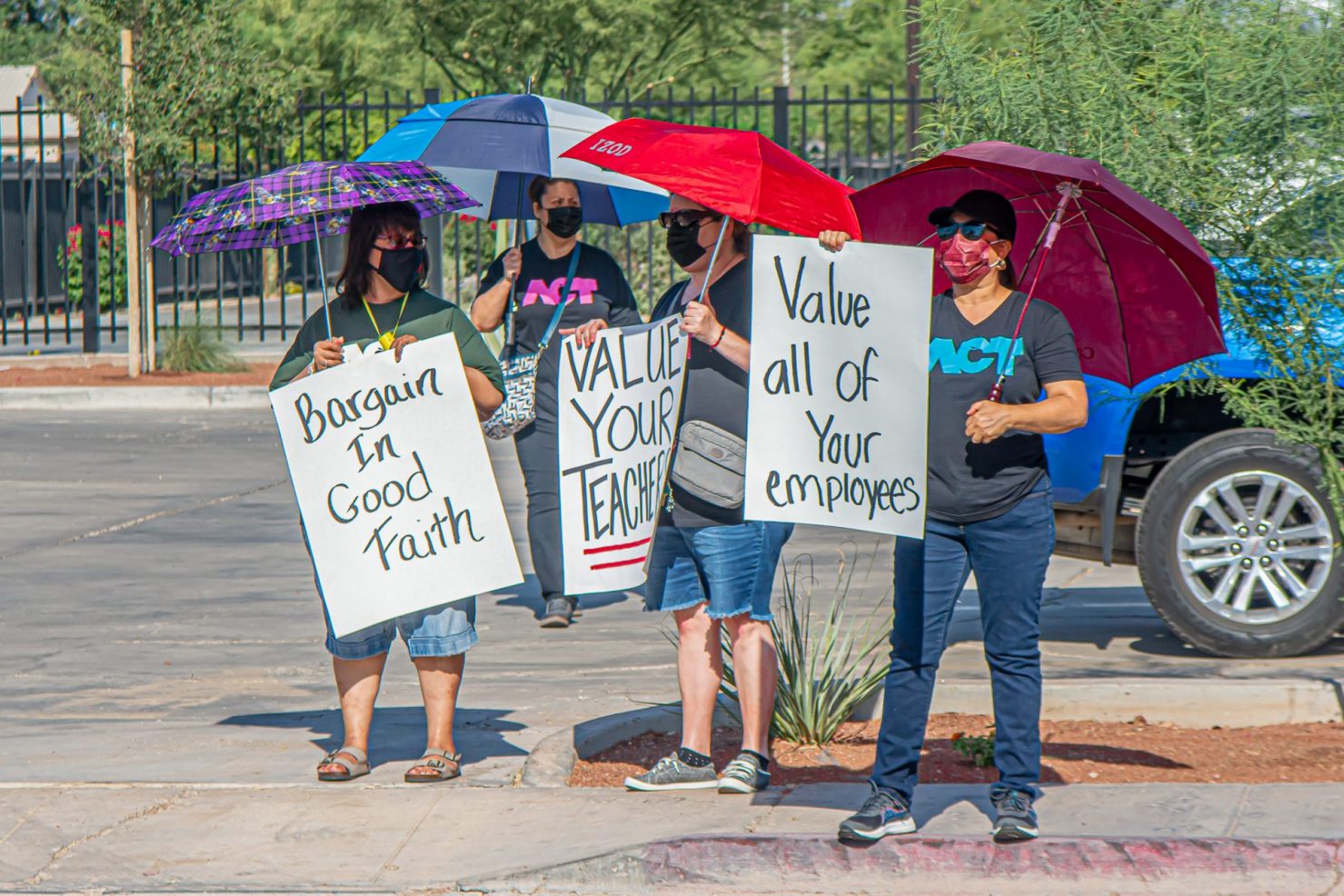 Associated Calexico Teachers union members with handwritten signs use umbrellas to shade themselves from the harsh sun on Monday morning, June 14, as they rally in support of the first day of reopened contract talks between the union and the Calexico Unified School District. | CAMILO GARCIA JR. PHOTO
Home
Education
In EducationLocal News

CALEXICO — Even though a recent survey of teachers indicated their support for a strike, both the Associated Calexico Teachers union and the Calexico Unified School District offered assurances that contract negotiations were ongoing and that any potential work stoppage remained a distant possibility.

“At this point, we are far from reaching that point,” Calexico Unified board President Ciro Calderon said.

Yet, the support that the teachers expressed for a potential work stoppage is also indicative of their support for the union’s efforts to extract more agreeable concessions from the district, said Juan Rodriguez, Associated Calexico Teachers negotiator and spokesperson.

Although he declined to discuss details of the recent survey where teachers overwhelmingly voiced their support for a potential strike, he did clarify that a work stoppage would need to be preceded by an unfair labor practice complaint, an impasse in negotiations, as well as a fact-finding review of the parties’ dispute.

“There’s a process that has to be followed,” Rodriguez said. “But we hope to come to terms on a contract that is equitable to neighboring districts in the Valley.”

In the meantime, parties were scheduled to resume another round of negotiations on Wednesday, Aug. 11. The results of those negotiations were not available by press time.

The union has also rejected the district’s initial proposal that would have provided a mixture of on- and off-schedule pay increases that the district characterizes as a 14 percent boost in compensation.

However, as the district itself acknowledged in its update, ACT has characterized the proposal as being “offensive” and disrespectful.”

Part of the union’s displeasure stems from the fact that 8 percent of the boost in compensation consists of one-time, off-schedule payments that do not amount to permanent salary increases for teachers, according to information provided by ACT.

By its calculations, the proposed cap on premium costs would result in more out-of-pocket expenses that would undermine any proposed salary increases, according to information provided by ACT.

In its July 1 contract negotiation update, the district touted its proposed cap as still being generous in comparison to other local public school districts. Those caps ranged from $9,200 to about $18,000 and included the costs of their respective employees’ dental, vision and life insurance premiums.