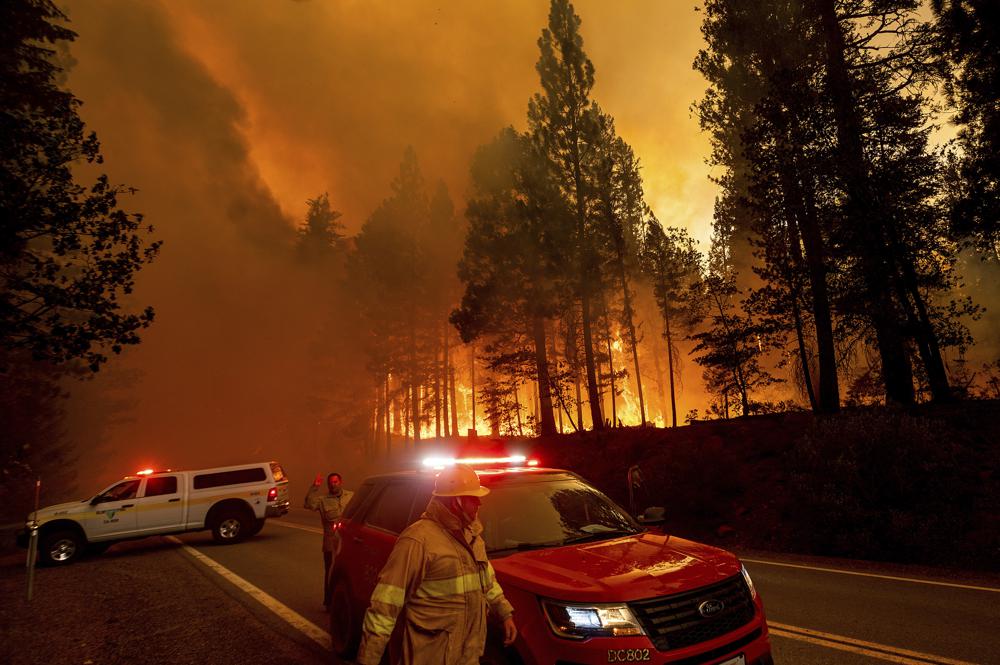 As of Thursday, Aug. 5, the Northern California Blaze Was Close to Reaching the Top Five on the State's List of Largest Forest Fires

QUINCY — One man is an old pro at battling wildland blazes, and one is a relative babe in the woods, with just over a year under his belt in the fire service, yet both experienced what might go down as one of the largest fires in modern California history.

As the Dixie Fire in Northern California’s Lassen National Forest in the mountains of Butte and Plumas counties has exploded over the past few days and grew to more than 361,800 acres on Thursday night, Aug. 5, a five-member crew from the Holtville Fire Department made its way out of the woods and arrived home after nearly two consecutive weeks assisting some 5,000 fire service members from throughout the Western United States.

For Holtville Firefighter Sean McLaughlin, age 20, who just joined Holtville fire in July 2020, this was his literal “trial by fire” on a wildland fire strike team.

For his boss, Holtville Chief Alex Silva, who has been one of three Imperial County strike team commanders since 2008, this was yet another in a long line of forest fires.

Yet this one was a doozy by anyone’s standards. On Thursday, Aug. 5, the Dixie Fire has moved up to No. 6 on the list of the state’s all-time largest forest fires and was still moving upward, a few thousand acres from the top five.

“It’s kind of crazy that the first one I’ve been on was such a large scale. I’ve seen the other news reports saying the size of the fire and then, you know, we get the reports here at base camp showing us the scope of the fire,” McLaughlin said from the Quincy base camp shortly after he awoke on Sunday, Aug. 1, his day off. The crews worked 24 hours on and 24 hours off.

Silva said the Dixie Fire is not the largest fire he’s been to, but on Sunday he said it was darn close.

“Silverado was the biggest one, but not much bigger,” the chief said. “This is huge.”

Silva might have been getting mixed up a bit if he was referring to the Silverado Fire in October and November 2020 in Orange County in which 13,390 acres burned.

The Dixie Fire, which was at just 35 percent containment on Thursday night, has been burning for three weeks, has seen as many as 6,500 fire personnel assigned to it at one time, and has resulted in the confirmed loss of 45 homes and commercial structures, according to the latest update from Cal Fire.

Silva, McLaughlin, and Holtville fire crew members Capt. Eric Espinoza, Engineer Sergio Hernandez, and Firefighter Edward Rubin were part of a 20-member strike team that included El Centro and Centinela State Prison personnel, a crew from Yuma County and a replacement crew from Mule Creek State Prison in Ione after a Brawley Fire Department crew was turned back when its fire engine broke down after the local group was deployed on July 20, Silva said.

Split into two staging areas, Silva and his crews have been assigned to structure protection in the more populous east zone of the fire, where they have kept to “working to coordinate structure protection in the Keddie Structure Group, (where) firefighters have assessed and prepared structures along Chandler Road and the Highway 70 corridor,” according to a report from interim El Centro Fire Chief Cedric Ceseña late last week. The Chandler Road and Highway 70 corridor is located on the eastern edge of the fire, immediately north of the town of Quincy, where base camp is located.

Silva said the local strike team had fared pretty well, not losing a single structure as they hopped around the area, first working the community of Greenville, inside the town of Quincy, and at a Boys and Girls Club compound called Oakland Feather River Camp.

Sadly, on Thursday, as the fire raged anew on the eastern boundaries, the city of Greenville was completely overrun by fire, incinerating much of the community of 1,000 people.

For their part, the local strike team in its assignment also trailed behind a water tanker on difficult terrain along railroad tracks, dousing brush and cutting fire lines on ridges overlooking the tracks, Silva said on Sunday.

It’s been a valuable experience for McLaughlin, and well, it’s the kind of work that Silva really enjoys.

“I just wanted the experience, and it pays good, so I was happy for both,” McLaughlin said Sunday. “It’s definitely been interesting and a lot to learn, just being around the base camp, because there’s so many more firefighters around here. So, there’s so much knowledge to learn.

“Yeah, I definitely think I’ll sign up and try and come out as soon as I can,” he added, and he hopes to stay in the fire service as long as possible.

For Silva, although he said the hours are long, the mattresses hard, and the food pretty bad, there’s elements to that job that keep him coming back for more.

“These guys, a lot of us, they grew up wanting to do this and be firefighters, and so we actually see the gratitude that the public has. … This is why we do what we do, and it is an extra boost,” Silva said.

“I’m blessed to have such dedicated hard workers, and that’s a reflection on their departments and their fire chiefs,” he said. “I’ve asked so much of them, and they have that mental toughness. … we have a great bunch of guys working for us.”

And, Silva said, he could not have been a strike team leader for the last 13-plus years with an understanding family and wife at home who supports his lengthy deployments.

“My family makes it happen.”