IMPERIAL COUNTY — The following reports were collected from the Imperial County Sheriff’s Office call logs from July 27 through Aug. 3.

6:16 a.m.: A woman reported being attacked by an aggressive pit bull on Beach Club Drive in Salton City.

11:46 a.m.: Deputies responded to a two-vehicle accident at the corner of Highway 86 and McCabe Road involving a white Honda and a gray Honda.

11:46 a.m.: Dispatchers received a 911 call from a crying woman who said that one of her vehicle’s tires blew up. The caller told the dispatcher that she wasn’t injured before disconnecting the line.

9:19 p.m.: Union Pacific employees reported a possible body on the tracks near Sidewinder Road in Winterhaven. The train operator was not sure if the person had been struck by the train.

5:09 a.m.: A resident of Sea Garden Avenue in Salton City called 911 to report that three unknown women broke into her residence and were sitting on the couch. The caller was unable to provide a clothing description and said that she was talking to the three women.

3:52 p.m.: Deputies were called to assist the California Highway Patrol after a vehicle went into a canal near the corner of Austin Road and Weaver Road outside of Brawley and was fully submerged. The occupants of the vehicle were able to make it out safely.

8:48 p.m.: Deputies were called to assist the California Highway Patrol at the scene of a two-vehicle accident on Highway 78 at Green Road near Brawley. Five people were reported to be injured including one possible fatality.

9:25 a.m.: A resident of Fullerton Avenue in Salton City called 911 to report waking up to find all of his animals dead. He said at least 10 to 15 animals in his backyard had been killed and advised that he’d witnessed a suspicious black Dodge truck in the area the night before.

4:36 p.m.: Security officers at the Q Casino in Winterhaven reported a male subject using an unknown type of drugs in the restroom.

4:58 p.m.: Deputies responded to a house fire on Parker Road near El Centro.

6:39 p.m.: A resident of Arnold Road in Winterhaven called deputies to report that a coyote had attacked her dog and took off with the dog in its mouth. 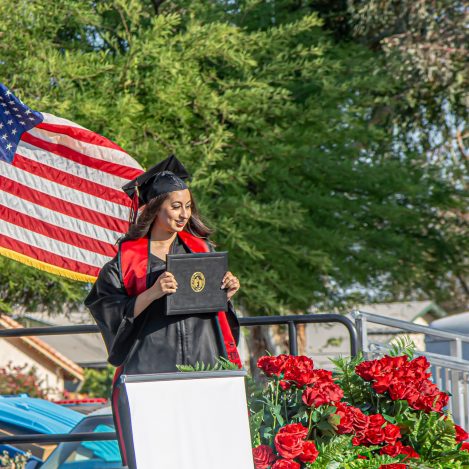 SDSU-IV Grads Along for the Ride