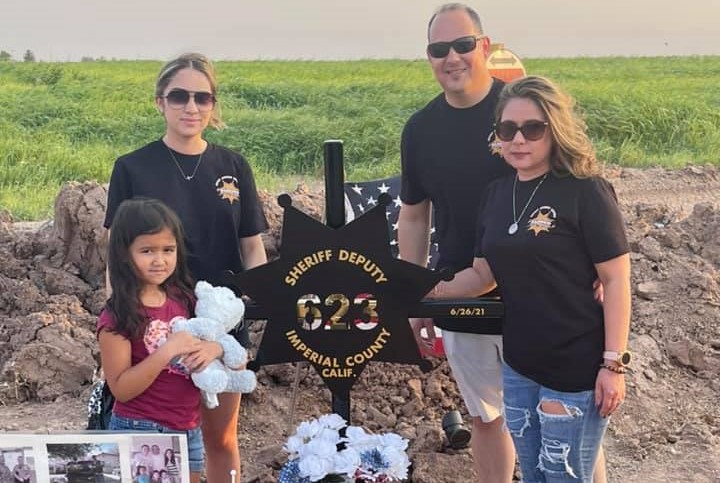 The mother of the late Deputy Anthony Redondo, Janelle Frazier (from right), his stepfather, sheriff’s Sgt. Eric Frazier, and his two younger sisters stand next to a memorial created by Brawley resident Joel Gonzalez and friends and unveiled on Monday evening, July 12, at the southwest corner of Aten and Forrester roads in the area where Redondo was killed in a collision on June 26. | JOEL GONZALEZ PHOTO
Share

IMPERIAL — From conception to its unveiling in front of friends and family, a semi-permanent roadside memorial to the late sheriff’s Deputy Anthony Redondo took less than week to fabricate and install.

On Monday evening, July 12, Brawley resident Joel Gonzalez coordinated with the Frazier family — Deputy Redondo’s mother, Janelle Frazier; stepfather, sheriff’s Sgt. Eric Frazier; and his two younger sisters — to meet at the southwest corner of Aten and Forrester roads west of Imperial to reveal the metal memorial at the site where the 25-year-old deputy was killed in a collision on June 26.

“We kind of wanted to wait for the funeral to pass knowing we could set it out there and the immediate family could be there (when we unveiled it),” Gonzalez said on Tuesday, July 13, who helped put together the talents of several of his friends and business associates to create the piece.

After an emotional couple of weeks for many in the law enforcement and Imperial Valley community, Redondo was laid to rest in Evergreen Cemetery on Saturday, July 10, following services over two days that draw several hundred people to Southwest theater in El Centro and tens of thousands of viewers who watched the services streamed online.

The roadside memorial, Gonzalez said, was “something his mom or dad or stepdad or anybody who wants to drive out there can go out and see.”

Because Aten and Forrester are county roads, Gonzalez said they don’t have to contend with the state Department of Transportation, which has been known to frown upon roadside memorials at the site of fatal accidents.

Redondo died around dusk on June 26 in the line of duty, when he was involved in a two-vehicle collision while heading to an emergency call in the Seeley area.

Gonzalez saw that makeshift memorials had started to appear almost immediately after the accident, with “people dropping crosses and doing a bunch of stuff there,” he said.

“I thought, ‘What can I do for them that other people haven’t already done? You know, the amount of support we had (for this project was) huge,” Gonzalez added. “This was a life-changing event. It was a tragedy for (the Redondo and Frazier families and) the other people involved.”

Gonzalez knew he had the means and the friends to make this happen, owning his own fabrication shop as part of his Desert RV Service in Brawley. So, he conceptualized the idea and farmed out certain parts of it, bringing the project together in five to six days.

Joey Dollente at Axis Metal Design cut the deputy star with his plasma torch, while the lettering and graphics were done by Troy Caston at Kaz-Bros. Design Shop. The welding and paint was done at Desert RV and with the help of Rich Rosas, and Duece Robertson was also instrumental in making it happen, Gonzalez said.

On Monday night, Gonzalez and a couple others arrived to the site early and cleaned up the area, drove the metal memorial into the ground and set up solar lights, flags and temporary items just for the impromptu ceremony, and awaited for the Fraziers to arrive around 7 p.m.

“When they showed up, we pulled the cover off of it and presented it to them. And I think they were speechless because they didn’t have a lot to say, and it took them a while to open up. But I know they were really happy with it,” he said. 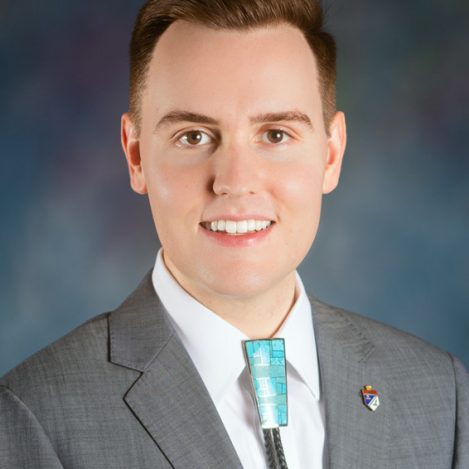