CALEXICO — The following reports were collected from the Calexico Police Department call logs from July 6 through July 11.

9:58 p.m.: On officer on patrol at a homeless encampment on the 700 block of Cesar Chavez Boulevard stopped to question a man sitting on a couch, identified as Francisco J. Ramirez Garcia, after noticing a glass pipe sitting next to him. Garcia admitted that the pipe was his and a further search revealed a small scale and a bundle between Garcia’s feet. The bundle was found to contain a large amount of suspected methamphetamine, which Garcia also admitted was his. A personal search revealed a bottle of six suspected oxycodone pills in Garcia’s left pocket. Garcia was cited for possession of a controlled substance for sale, possession of a controlled substance and possession of drug paraphernalia and was released on a promise to appear in court.

8:30 p.m.: A subject visited the front counter of the Calexico Police Department to report that his white Dodge truck had been burglarized while he was in a movie at the Calexico 10 Theatres on Scaroni Road. The thieves smashed a window and made off with a toolbox worth $160.

11:27 a.m.: A white 2013 Toyota Avalon was reported stolen from the 200 block of East Fourth Street. The owner told police that he left the vehicle unlocked with the keys inside while he was away in Mexicali for the weekend.

10:07 p.m.: An officer on patrol at the Border Motel parking lot on East Fourth Street attempted to make contact with a known gang member who fled into a room at the motel. The man initially refused police orders to exit the room but eventually came out and was placed in handcuffs and arrested. The subject was taken to the Calexico Police Department where he was cited for resisting arrest and later released on a promise to appear in court.

11:14 p.m.: Police responded to the Calexico Village apartments on Kloke Avenue for reports of a male subject drinking in public. Officers made contact with the man, who did not respond to commands from officers and was holding a beer can in his hand. Officers eventually cuffed the man, but he continued to refuse to cooperate and would not provide an ID or his name. The man continuously showed officers his middle finger and yelled profanities. The man was revealed to have a warrant out of Yuma for a violation of probation. He was later booked into Imperial County jail. 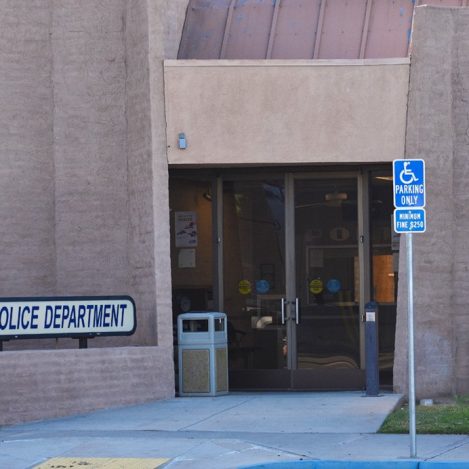